The Most Impressive Record Fish Caught in 2021 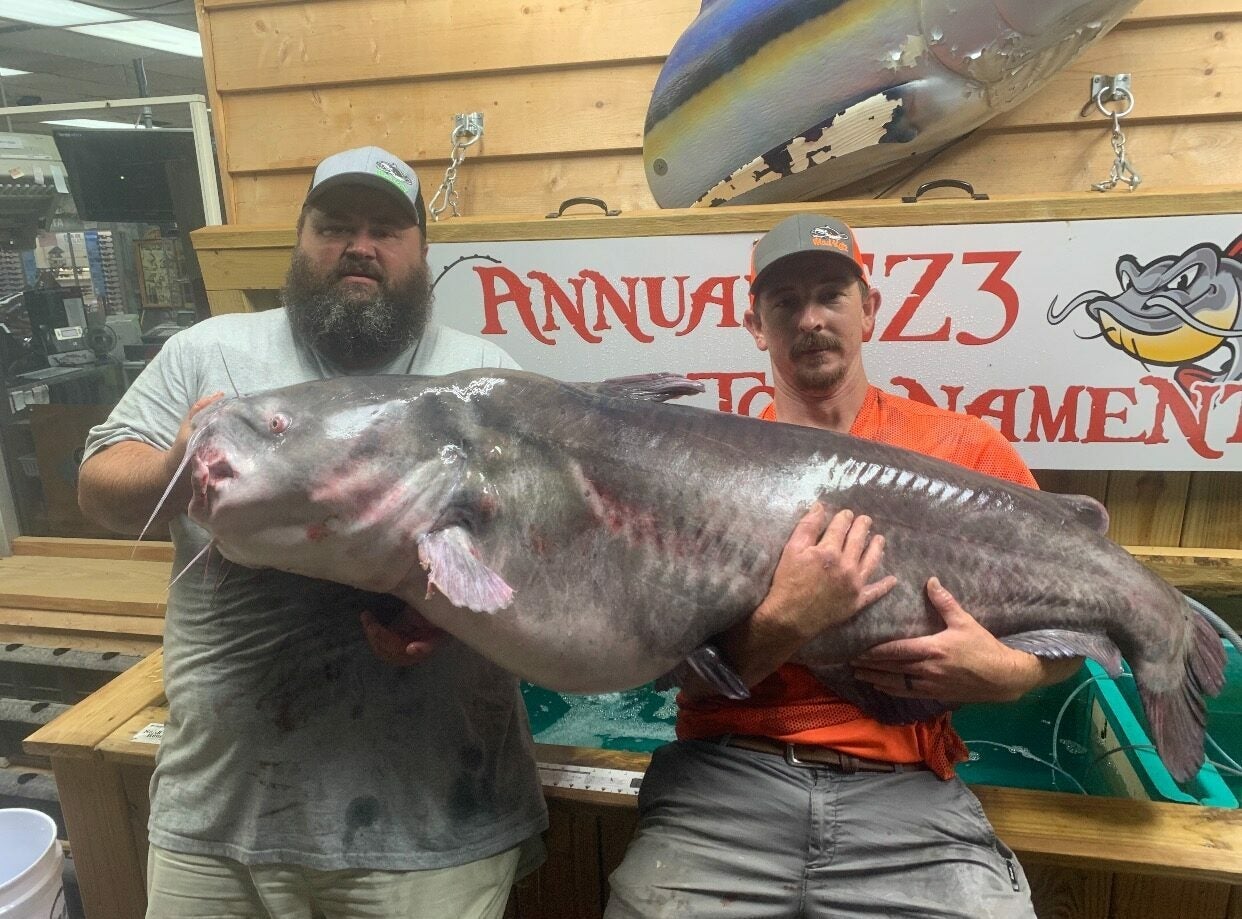 This is just one of the many unbelievable record catches of 2021. Rocky Baker
SHARE

Who doesn’t like a big fish story? Well, these are the biggest fish stories of 2021. Some truly impressive long-standing records were broken this year, including a 43-year-old Michigan state-record chinook and a 64-year-old Minnesota muskie record. There were also some lesser-known but equally impressive records caught—such as the bowfishing world-record paddlefish and a spearfishing world-record halibut. Out of the millions of fish caught this year, only 20 trophies made this list. These are the best of best.

In one of the first records to fall in 2021, California angler David Burruss boated an absolute slab of a black crappie in February. The 4-pound, 5.44-ounce black crappie toppled the previous record, which was a 4-pound, 1-ounce fish that had stood for 46 years. Burruss caught the fish in Northern California’s Clear Lake, which is known for its big largemouths, but quite clearly also holds some monster panfish.

Countless die-hard salmon anglers would’ve loved to break Michigan state record chinook, but that’s not what happened. On a charter trip in August, teenager Luis Martinez caught his first ever salmon—and it was a 47.86-pounder that went down as the biggest king ever caught in the Great Lakes. The previous Michigan state record was a 46.6-pounder that was caught back in 1978.

This year, the famed Yellowstone River produced a world record. It wasn’t a trout but a gigantic 92-pound paddlefish. Bowfisherman Steve Harris, Jr. didn’t snag the paddlefish, as many anglers do, but arrowed it when it rose to the surface of a deep pool.

5. A Record Catfish…On a Fly Rod

You don’t see many people successfully targeting catfish on a fly rod, let alone one this big. Texas angler Ben Christensen is something of an expert at targeting catfish on the fly. This fall, he sight fished to a 31-pound blue catfish that’s a water body record for the Pedernales River, as well as an IGFA 12-pound tippet-class record. And he did it on a 4-weight.

This 2-pound golden trout would be an impressive catch for an angler of any age, let alone a 4-year-old. Caroline May Evans landed the beauty just before her 5th birthday on a backcountry fishing trip in Wyoming’s Wind River Range with her parents this summer. The fish is a record in the International Game Fish Association’s (IGFA) 10-and-under Smallfry division.

7. Panfish of the Year

Angler Thomas Farchione is going to need a bigger pan. He caught an incredible 6.3-pound IGFA world record redear sunfish from Arizona’s Lake Havasu this May. The slab was 17-inches long with a girth of 20 inches.

This one’s undeniably epic. A 32-year-old woman from Fort Lauderdale speared a 71.4-pound halibut while freediving in 46-degree water just south of Homer, Alaska. The fish has been confirmed as the new International Underwater Spearfishing Association (IUSA) record holder for Pacific halibut in the Women Sling/Polespear category.

9. Bluegill for the Win

This is the smallest record fish on our list, but that doesn’t mean it isn’t impressive. Georgia angler Wendell Mathis caught a bluegill that weighed nearly a pound and a half (1-pound, 7.8-ounces, to be precise) that easily beat out a decade-old Georgia Outdoor News record. The bait? A cricket.

Nolan Sprengeler had to break the ice—literally—to boat the new Minnesota state record muskie. He and his buddies were fishing Lake Mille Lacs this November, right before the lake iced for winter. They had to smash some ice at the boat launch, but it was worth it. Sprengeler landed a 55-pound, 14.8-ounce monster on the last cast of the night, breaking a highly sought-after 64-year record. “Muskies are the ultimate predators,” said Sprengeler. “They’re the ultimate fishing challenge… I can’t even describe how excited we all were.”

Almost every fishing record has to do with the size of the fish, but that’s not the case with this one. Last spring, Alec Lackmann caught a bigmouth buffalo that was estimated to be 112-years-old, making it the oldest freshwater fish on record.

New York angler Roy Isaac caught a state record 4-pound, 7-ounce white crappie while fishing at a private lake called Sleepy Hollow. Isaac’s crappie not only smashed the previous state record, which was a 3-pound 13-ouncer, but it’s the largest crappie ever caught in New York, as it also topped the current state record black crappie, which is 4-pounds and 1-ounce. “It was a nice fight on 4-pound-test, believe me,” said Isaac. “That boy had been there a long time.”

Bighead carp are an invasive fish plaguing waters throughout the U.S., so it’s nice when we can celebrate their removal. Bowfisherman Matt Neuling arrowed a gargantuan 125-pound, 5-ouncer in July. It’s a Missouri state record in the alternate methods category and also tops the Bowfishing Association of America‘s existing world record bighead. “We knew what type of fish it was, but we had never seen one that size,” said Neuling. “This thing is a straight-up monster. A five-gallon bucket could easily fit in its mouth.”

14. The Record That Could’ve Been

This one isn’t actually an official record, but it quite possibly could’ve been. Teenager Alonso Ordaz boated a monster blue cat that tipped the scales at 55-pounds, which put it in contention to beat the state record of 54.25 pounds. But Ordaz and his friends release the fish instead. Either way, it’s one hell of a catfish.

Scott Turner landed an Idaho catch-and-release state record steelhead this year—for the second time. He first set the record in 2017 with a 36-incher, which was broken in 2019 by another angler (and then another). Turner reclaimed his title this year with a beautiful 39.25-inch steelhead. He’s the only person in Idaho history to set a state catch-and-release steelhead record twice.

This is hands-down one of the most impressive record catches of the year. Montana is known for its trout fishing, and the state lived up to that reputation when Robbie Dockter landed a 32.43-pound brown trout on the Marias River in March that broke a state record set in 1966. The best part? He was using one of the most iconic trout lures of all time—a Kastmaster. And he did it on 4-pound test line.

Florida is home to a large number of peacock bass—and the biggest one in state history was caught this year. Felipe Prieto caught the nearly 10-pound monster while fishing a Broward County pond in October. “I just pitched to a random spot and the line started peeling out of my hands at a hundred miles an hour,” he says. “When I set the hook, I could feel that I had a really big fish on.”

This freshwater monster was too big for one person to hold out of the water. Angler Jennifer Schall landed the brute—a 132-pound alligator gar. It’s an IGFA 50-pound test class world record and goes down as one of the largest freshwater fish records ever recorded by a female angler. Schall caught the giant on a fishing trip with her husband, Jason, on the Trinity River in Texas. The two of them tallied up a total of 13 IGFA world records on the two-week trip.

Six-year-old Mirabella O’Brien caught a 16-pound, 5-ounce tripletail while on a “daddy-daughter” fishing day with her father, Jay O’Brien, who’s a charter captain out of Mobile, Alabama. The fish is an IGFA Female Smallfry record for the species—and Mirabella hooked and reeled it to the boat all by herself. “She’s ate up with [fishing],” says Jay. “You know, you don’t find many young girls that are that ate up with it, but she just loves it.”

This was one of our most popular fishing stories of the year—for good reason. This blue catfish is a downright monster. Rocky Baker landed (and released) the giant blue cat on the Roanoke River in July. It weighed a whopping 127.1 pounds, smashing the previous record of 121 pounds. “It felt like [the fish] was pulling a Volkswagen up the river,” Baker told F&S. “We were like, ‘What the **** is this?’ It was like a dinosaur, you know. We were stunned.”