Ben Melvin said the 13.4-pound koi fish "looked like a fire hydrant coming toward me in the water" 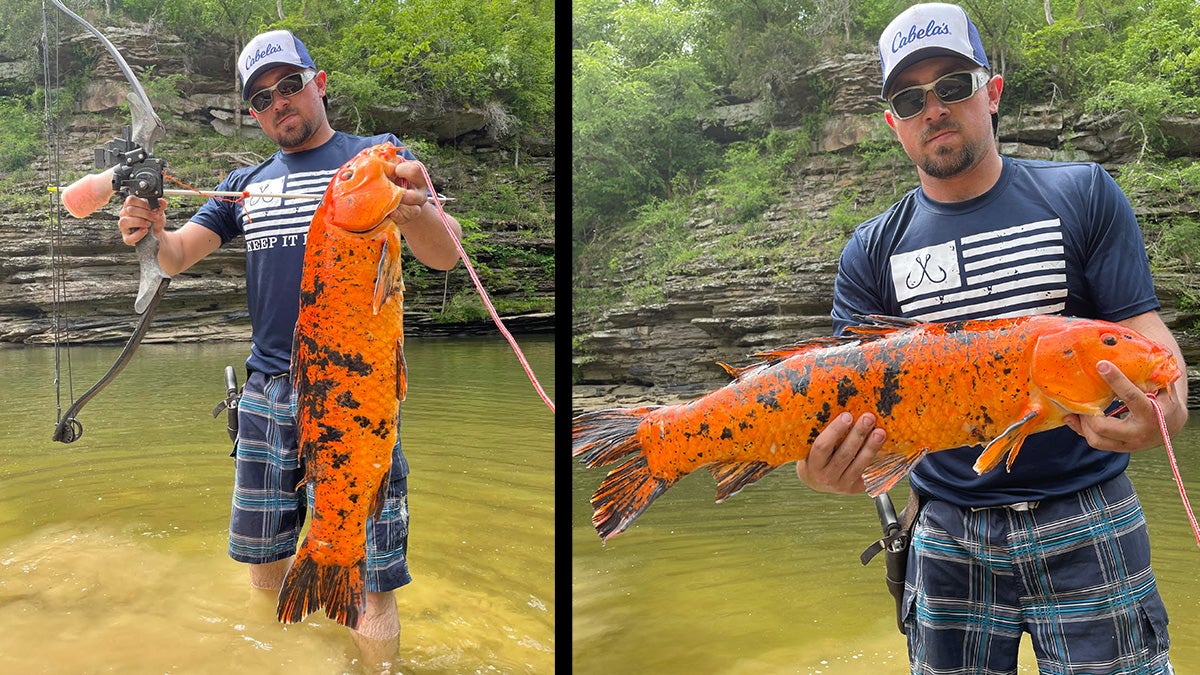 Alabama bowfisherman Ben Melvin arrowed a state-record koi—yes, koi—during a family float trip on April 30. He boated the 13.4-pound exotic fish on the Mulberry River near Hanceville. The veteran recreational and tournament bowfisherman tells F&S it’s only the fifth koi fish he’s seen in a decade of fishing the lakes and rivers of northern Alabama.

Melvin bowfishes seriously at least once a week, but on this outing, he says he was mostly just enjoying a Saturday on the river with his family. Because gar spawn in the Mulberry in late April, he decided to take his bow along in case he spotted any. He had already shot a couple of gar when he spotted the bright-orange koi. It was swimming toward the boat along with a smaller white koi that had black and orange spots. “I knew exactly what it was because they definitely stand out,” Melvin says. “It looked like a fire hydrant coming toward me in the water.”

Koi fish are a domesticated ornamental variety of carp often stocked in garden ponds. Though they’re not thought to pose as significant of an ecological threat in Alabama as invasive Asian carp, they are considered an invasive species in the state. Dumping them in public waters is prohibited.

“If I had to guess, I’d say it flooded out of someone’s pond,” Melvin says. “With all the bass that are in that river, I don’t think a baby fish that color would survive long enough to get that big.”

After Melvin shot the fish, he feared his arrow hadn’t penetrated far enough for the barbs to fully deploy. So, he allowed the fish to make its run without touching his reel. Then he and his wife paddled after it in their canoe. That turned out to be a wise decision. “The arrow was almost out of the fish when I retrieved it,” Melvin says. “It was a good thing we chased it down because if I had tried to horse it in, I’d probably have lost it.”

The 13-pound, 31-inch-long fish didn’t seem particularly remarkable at first. “That’s small compared to some of the 30-, 40-, 50-pound grass carp we’ve shot,” says Melvin. But a buddy started telling him how rare the neon-colored koi was and that he should get it mounted. Another friend told him it might be a state record. He looked up the species on the Bowfishing Association of America (BAA) website and saw the Alabama record was a 12-pound fish. When he weighed his koi at home, the scale showed 15 pounds, but by the time he got it to a certified scale, the weight had dropped to 13.4—which was still big enough to claim the top Alabama spot in the BAA book.

Melvin decided to take his buddy’s suggestion to enlist the services of a taxidermist, and now he’s looking forward to having a very distinctive mount on his wall. “It’s neat,” Melvin says. “It’s definitely a story to tell. I’m proud of it, no doubt. As I said, I’ve only seen five of them my whole life, so I guess I just happened to be in the right spot at the right time.”