We're talking about 6- and 7-pound smallies. Here's how an expert Wisconsin guide puts them in the boat 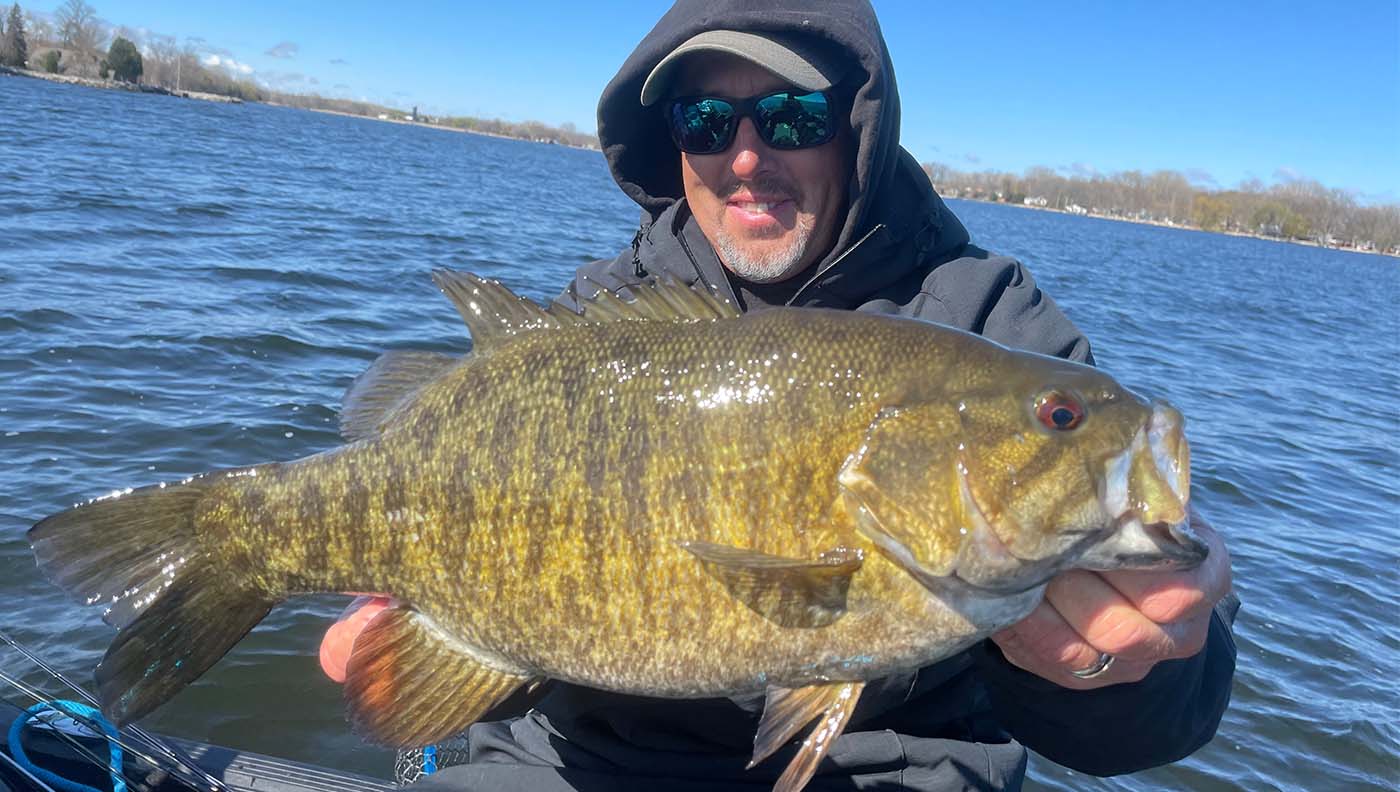 Everyone loves big smallmouth bass, because the fight these fish put up is the definition of knuckle-busting fishing fun. But big is a relative term.

Most folks would call a 4-pound smallie a great fish, and a legitimate 5-pounder might be the bronzeback of a lifetime for some. But truly huge smallmouths—fish in the 6- and 7-pound class—invoke another level of awe, inspiring comparisons to 180-inch bucks or gobblers with 1-3/4-inch spurs.

Wisconsin guide Eric Haataja, who operates Big Fish Guide Service, specializes in those smallmouths. He guides clients for big smallies 60 to 90 days per season and puts about a dozen 6-pound-plus fish in his boat every year. During a tournament several years ago, Haataja and his partner brought in five smallmouths that weighed 32.69 pounds—an average of almost 6.54 pounds per fish.

Haataja loves teaching anglers how to target these bucket-list fish. Here are his top 5 tips for catching truly huge smallies.

If you want to catch huge smallmouths, the first thing you have to do is locate the waters that hold true trophy fish. “It mostly comes down to two things: The fish need to grow old and not get ridiculous amounts of heavy fishing pressure,” Haataja says. “Regardless of what people think, when you catch a fish over and over and stress it out over and over, it’s like a fine-tuned athlete who gets in a car wreck and then another car wreck. When you stress out any fish repeatedly, it’s not going to live as long.”

In big bodies of water, like in Door County where Haataja fishes, smallmouths can escape a lot of that because the pressure is spread out. Same goes for remote lakes that don’t get a lot of attention. “These fish can grow old and get big, as long as they have the right food supply and good genetics.”

The window for lunker smallies can be brief, says Haataja, and he keys on two periods when bass are generally at their heaviest: the pre-spawn period in spring and, to a somewhat lesser extent, autumn, when fish feed heavily in preparation for winter. He’s a big fan of Wisconsin’s catch-and-release bass season, which lets anglers legally pursue bass during early spring.

“You can go out in April and target those fish when they’re putting the feed bag on,” he says. “It’s the absolute best time of the year. They’re just coming off winter, and they’re feeding heavily ahead of the spawn. A lot of fish move up shallow, where they’re much easier to access and catch. You can work a windblown shoreline in spring or a bay where the water temperatures are warmer and catch lots of fish.”

During autumn, Haataja focuses on the month of October or even early November, but he stressed that fish will usually be much deeper than in spring.

“Typically, they’ll be in deeper areas with rocks or with more current or offshore structures.”

[3] Use the right presentations for big smallmouths.

Haataja has a handful favorite lure presentations for big smallies. The first is an Alabama umbrella rig, or A-rig, which lets you cast a school of baits on wire arms. Typically, the rigs have four outer wires and one center wire that’s somewhat longer. Haataja said many anglers aren’t familiar with A-rigs, but he likes them because they let him present multiple baits, and they work well in spring or fall.

He also likes traditional smallmouth presentations such as jerkbaits, tube jigs, and Keitech swimbaits. And he uses finesse fishing lures, too, such as light marabou hair jigs—down to 3/32-ounce—and Ned rigs, which combine small plastic worms or other plastics with a light mushroom jighead.

“When it’s windy, a jerkbait works really well, as does an A-rig or big swimbaits,” he says. “When it’s calm and clear, finesse rigs to shine. The hair jigs, Ned rigs, and tube jigs work really well then.”

Haataja’s line choices also depend on conditions and where he’s fishing. When he uses a spinning rod, he goes with 10-pound Power Pro braided line, bumping it up at times to 15-pound test. When throwing jerkbaits with a baitcaster, he runs 12-pound fluorocarbon. For finesse fishing, Haataja might go with a 10-pound fluorocarbon leader, dropping down to 8-pound line at times.

[4] Focus on the best conditions for big fish.

Haataja says some people are surprised that he favors windy, wavy conditions rather than calm water. But his results don’t lie.

“Wind creates a turbulence that adds current and positions the fish in a certain way, and it blows warmer water temperatures into certain areas, so you’re able to trick the fish more easily,” he says. “A lot of guys want to go out on those beautiful calm, sunny days in spring, but it’s very difficult to catch them during in those conditions—not impossible but tougher. When it’s rough, choppy, and windy, that’s when they’re biting.”

[5] Keep learning every time out.

Big smallmouths don’t come easily even for the best anglers. That’s why Haataja says it’s important for fishermen of all skill levels to observe and learn while on the water to boost their odds.

“Whether you hire a guide or fish in a tournament, usually the biggest takeaway is what you’re going to learn,” he says. “Maybe it’s how to fish a different style you haven’t tried, learning spots, learning how fast or how slow some guys fish, or maybe how they find fish.”

In fact, Haataja says that he learns a lot from his customers‚ anglers of all experience and skill levels.

“If you’re not learning something every time you’re out on the water, it’s like not learning every day at work or school,” he said. That’s fine for casual fishing. But if you want to catch 6- and 7-pound smallies, you need to keep learning.