Mutant Fish: Have You Ever Seen a Carp Like This? 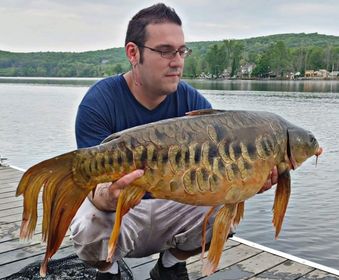 An angler in Connecticut landed a carp that looks like nothing you’ve probably seen before. Jimmy Ayala’s catch appears to display the telltale physical characteristics of both the fantail carp and the mirror carp, both of which are mutations of the common carp. The unique fish sparked interest from people across the country when Connecticut Fish and Wildlife posted a grip and grin picture of the catch on its official Facebook page.

“Check out this fish—an awesome display combining two mutations of the common carp,” wrote the Connecticut Fish and Wildlife agency. “Congrats to Jimmy Ayala for sharing such a rare and awesome catch.”

Mirror carp are known for their distinctively large scales that resemble mirrors, while fantail carp have long flowing fins. It’s not uncommon for carpheads to catch one or the other, but catching a fish with both morphs is a feat to remember.

“Not sure how this happens, but it is not commonly seen,” say state officials.

Ayala’s gold-hued fish is a nice-size carp to boot, though he didn’t provide details on its exact weight. Ayala has also chosen not to divulge where he caught the carp.

Common carp were introduced to the U.S. in the 19th century. Many people consider carp “trash fish” because they occupy marginal water and are bottom feeders, but in recent years, they have become a somewhat sought-after gamefish for bow fishermen, bait soakers, and fly anglers alike. Connecticut has become a carping hotspot and is especially known for the lunker carp cruising the bottom of the Connecticut River.

Common carp can bust scales to over 40 pounds in Connecticut, and the current state record is a 43-pound, 12-ounce fish that was caught by caught by Mike Hudak from the Connecticut River in 2012. Carp feed primarily on aquatic vegetation, insects, small crustaceans, and occasionally small fish. Connecticut Fish and Wildlife does not consider common carp invasive and manages them like any other gamefish with daily bag limits.