Just one of these line- and tippet-class records would be an impressive feat for most anglers. This duo recorded 13—in two weeks 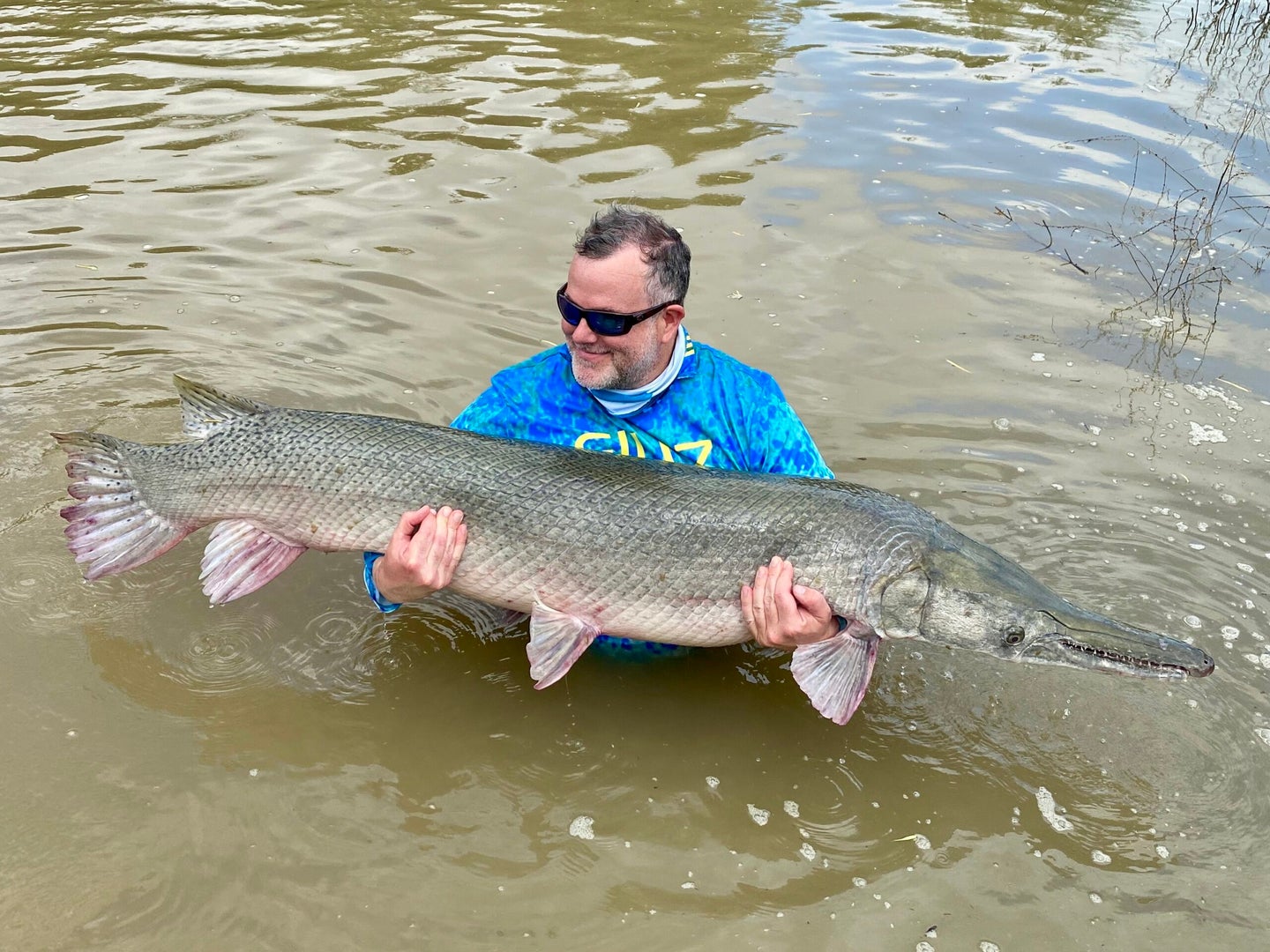 South Carolina couple Jason and Jennifer Schall took a fishing trip to the Trinity River in Anderson County, Texas, and returned home with 13 pending line class IGFA world records for gar, split almost evenly between the duo. They did it all in just two weeks spent primarily targeting trophy alligator gar, though Jason also caught a line-class-record longnose gar. They were fishing with Jason’s buddy Bubba Bedre, a local guide who specializes in gar expeditions.

“It was a trip of a lifetime,” says Jason, who has traveled the world as a passionate angler and says he’s caught over 700 species of fish. “We’ve said this many times since returning home, but that’s going to be a tough one to beat.”

Jennifer Schall landed a massive 132-pound alligator gar in the 50-pound test class, which if approved, would be one of the largest freshwater fish records ever recorded by a female angler. The gar didn’t grab the cut bait between its jaws until the last day of the fishing trip. Jennifer patiently let it work the bait into its bony mouth before setting the hook hard.

“The fight was pretty intense,” says Jennifer. “It honestly felt like trying to reel a submarine up off of the floor of the river. She was so heavy and just had so much mass and length to her, that trying to bring her up was really tough. She’d get close to the boat and be like ‘nope’ and dive again. She did that three or four times.”

“It was really fun to witness,” adds Jason. “I was sick with excitement. I felt like I couldn’t breathe. As soon as that thing shot out of the water, you knew it was the fish. It was the one you dream about—oh lord, please don’t let this thing come off the line.”

Well, it didn’t. Jennifer finally subdued the fish, which was way too big to bring onto the boat. They towed it to shore to take measurements required to submit it as a record, snapped a couple of quick pictures, and released the dinosaur-like monster back into the Trinity.

Jason also pulled off several impressive feats, landing whopping gar on extremely light line while also snagging tippet-class records by sight-fishing to trophy gar using flashy patterns on a fly rod. Perhaps most impressively, he landed a 123-pound gar using 6-pound-test. To pull it off, Jason spooled over a thousand yards of light line onto a big 80-sized spinning reel—and then tried to be patient when fighting the fish. It took him about 45-minutes to bring the gar in.

“I’m confident that even with the little torque that you can put on, you’re doing enough that the fish is still going to eventually tire out,” he says. “Alligator gar are one of my favorite species of fish. They’re just so strong and unique. They’re prehistoric monsters, really. They have these sharp rows of teeth and concrete heads. What’s not to love?”

The Schalls love the challenge of battling heavy fish with light line. Before their trip to Texas, Jason already had 14 active IGFA line- and tippet-class records as well as the all-tackle length record for channel catfish. Jason says that one part of pursuing line-class records is learning to accept that losing fish is inevitable. “It drives my friends crazy,” says Jason. “I go out there with my 2-pound line and get a big bass that jumps. They’ll see it break off and just roll their eyes and shake their heads. But you get used to it”

The duo adds that they only target particularly hardy fish for line-class records. All of the record gar they caught in Texas swam free after the required IGFA measurements were taken. The couple lives in Charleston, South Carolina, and has been together for five years. While they love chasing records together, their true passion is for sharing their love of fishing with others, be it friends, family, and even, strangers.

“We’re both certified fishing instructors for the South Carolina Department of Natural Resources,” says Jennifer. “We do fishing clinics for kids…One of the most fun parts about doing what we do is being with a kid—or anyone really—who catches their very first fish. It’s so much fun to just see them light up and have that experience.”