State officials expect "total mortality" of the trout population in at least half of the Lower Dolores tailwater. They also expect similar problems region-wide 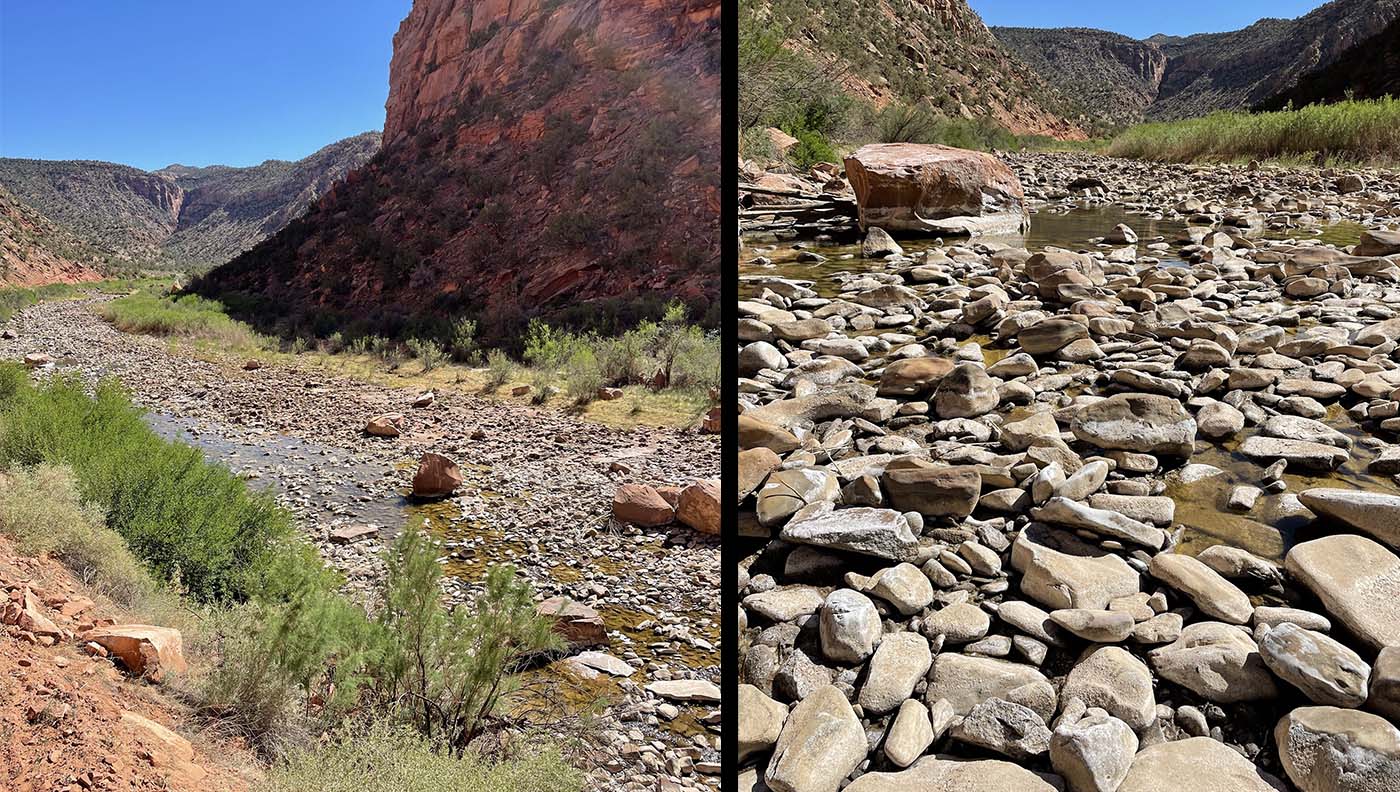 The Dolores River, a celebrated trout fishery near Durango, Colorado, is down to a trickle. Rig to Flip
SHARE

The lower stretch of the Dolores River, which translates from Spanish as “river of anguish,” is living up to its namesake. The popular trout-fishing tailwater, which sits below McPhee Reservoir, is down to a near trickle.

“The stream is flowing anywhere between 5 and 9 cfs,” reports Jim White, an aquatic biologist for Colorado Parks and Wildlife (CPW). “Typical flows are around 70 cfs or higher.”

Such low flows are taking a toll on the river’s trout population. The lack of water leads to higher water temperatures, which directly harm cold-water species such as trout.

Managers Expect “Total Mortality” in At Least Half of the Tailwater

The CPW manages a 12 mile stretch below McPhee Reservoir as a catch-and-release tailwater trout fishery. Given the conditions, the agency’s plan is to institute a voluntary fishing closure on the area. Regardless, White expects total mortality of the trout population in the lower half of that section, and potentially in part of the upper half as well. He is also concerned about the river’s mottled sculpin, a native cold-water species and favorite trout food, as well as warm-water native fish such as the flannelmouth sucker, the bluehead sucker, and the roundtail chub populations. That’s not to mention the insects, such as mayflies and caddis, that can’t live in high water temps.

“These are the lowest flows I’ve ever seen down there,” he says. “I’m expecting trout mortality creeping up closer to the damn than what we’ve ever seen.”

There are two main culprits in the Dolores’ plight: agricultural water use and drought. McPhee Reservoir was a man-made project completed in 1985 primarily to store and provide water for agricultural use in the region. The reservoir itself has become a known hotspot for cliff jumping and catching smallmouth bass, but recent drought conditions have put the project’s long-term viability in question. Not only is the tailwater at 5 to 10 percent of its usual flows, but farmers are only receiving similarly meager water allocations.

Before the creation of the dam, spring runoff would provide enough water to replenish deep pools and runs in the stretch of river that is now suffering. The reservoir is expected to reach its lowest level since its inception this summer.

Experts Eye Trouble for Trout Rivers Across the Region

“We’ve been in a drought for almost 20 years,” says White. “Everybody is suffering from dry conditions here on the West Slope of Colorado and region-wide in Utah and Wyoming.”

White adds that climate change is playing a role in creating extended drought conditions “without a doubt.” According to the U.S. Drought Monitor, every state in the Western U.S. is currently experiencing drought conditions.

“Droughts are more common, they’re lasting longer, and they’re tied to some of the variability that’s coming from climate change,” says Scott Yates, Director of Trout Unlimited’s Western Water & Habitat Program. “The Dolores and a lot of other western tailwaters are cautionary tales that things are changing.”

Yates doesn’t expect drought conditions in the West to improve any time soon—in the Lower Dolores nor across the rest of the Colorado River Basin. He’s focused on finding innovative solutions to counter the effects, with efforts such as providing market incentives for farmers to use less water during dry years. TU’s Western Water & Habitat Program has a core mission of working with ranchers and farmers on a variety of ways to restore trout habitat on private lands.

“We need to work together and find additional tools in how we manage water,” he says. “Our bottom-line on this stuff is that farmers, ranchers, municipalities, tribal interests, and conservation groups are going to have to get to the table to work together.”

Until then, anglers can expect to see more of their favorite fishing waters drying up, like the Lower Dolores. “As drought continues to grip the West, more and more rivers will be facing the same scenario—this year and beyond,” warns CPW in a press release.