The Rules of False Albacore Engagement

Every fall, when false albacore migrate inshore, they become one of the most prize species to target. But you better act fast, because they don't stick around for long 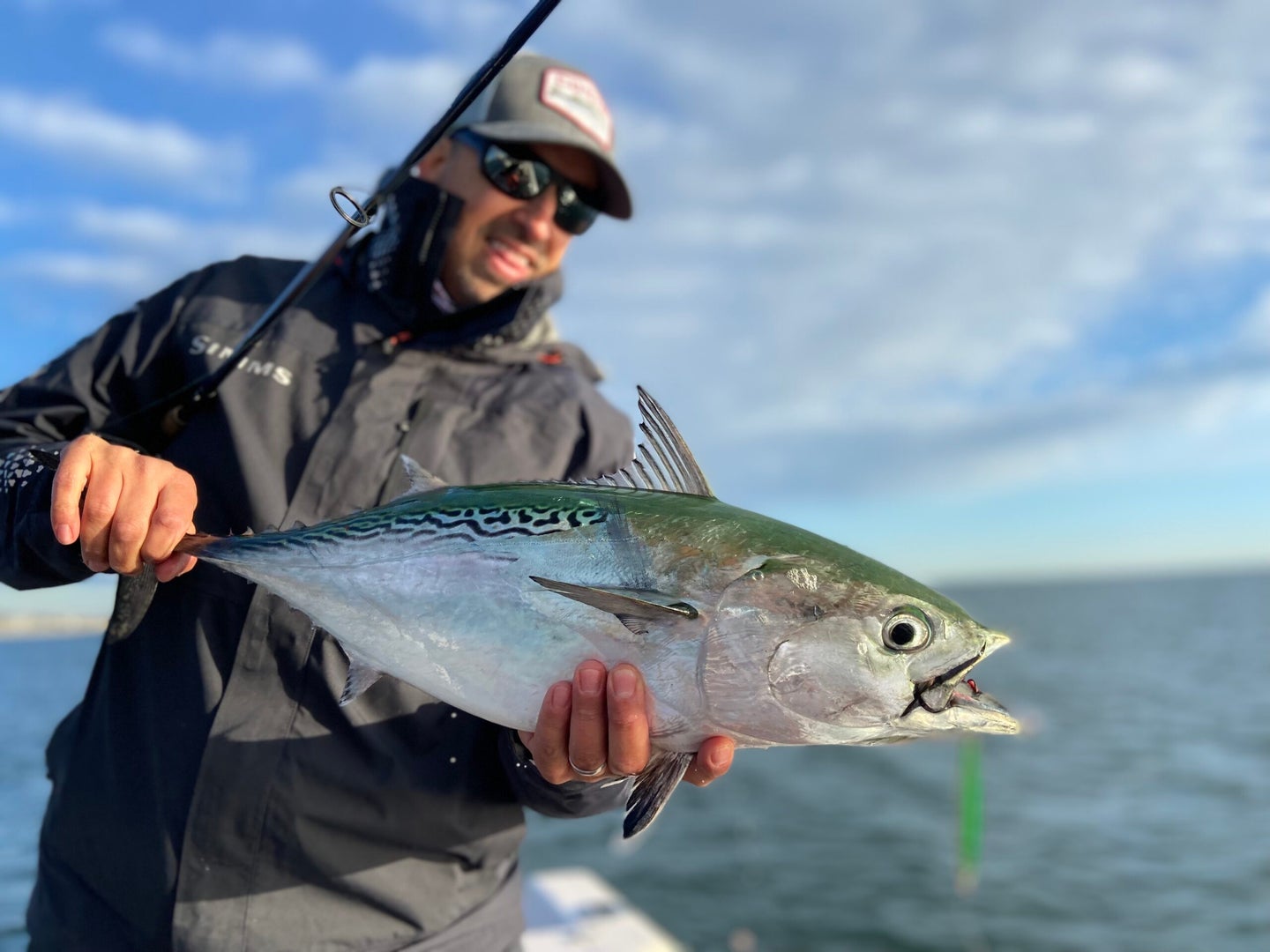 Want to test your reel's drag? Hook a false albacore, and hang on. Joe Cermele
SHARE

Your average offshore angler loathes false albacore—better known as bonita in the South and across the Gulf of Mexico. They’re not prized on the table, and they have a nasty habit of eating jigs, baits, and trolling lures intended for much more delicious targets like yellowfin tuna and mahi mahi. In other words, false albacore are a nuisance in the bluewater scene.

But then a funny thing happens. Every fall, they migrate inshore from the Carolinas to Massachusetts, instantly transforming from pest to prize. Anyone with a small boat, kayak, or just two feet on the sand can get a crack at these mini tunas, which fight 10 times harder than all the other inshore species within that migratory range. Their visit, however, is fleeting, which is why members of the false albacore cult work so hard to get a fix while they have the chance. Chasing these speed demons will test your patience and your drag, but you can increase your odds of success by remembering these critical rules.

False albacore are the Indy cars of the ocean. Everything they do, they do with speed and aggression. But what they don’t do is turn around and look behind them. A school of albies gets such a head of steam when rushing a pile of baitfish that the encounter often only lasts a couple seconds. You see a few boils, a few splashes, maybe a couple quick streaks just below the surface or a fish airing out, and it’s over. Then, they’ll do it all again 50 or 100 yards away, sometimes seconds after you last saw them, sometimes not for 10 minutes or more. Part of the challenge is simply getting yourself into a position to hit them with a cast. But even when you do get your shot, a common mistake anglers make is casting where the albies were instead of where they’re going.

You’ll often see albie freaks watching instead of casting. They’re looking at how long the schools stay up when they feed and, more importantly, which direction they’re moving. If you can get an idea of that general direction, you’ll not only have a better shot at positioning yourself in their path, but you’ll also know where to fire a cast when they finally pop up in range.

For a fast-moving albie to snatch your lure or fly, it practically has to collide with its face, and once your offering is behind it, it’s totally out of play. Therefore, the goal should always be to slightly lead the fish. This is easier for boaters, but surfcasters can do this by noting which direction the fish are moving up or down the beach, then walking well ahead of the action and waiting for the fish to come to them, rather than running after every group of boilers but being late to the party with a cast.

There’s no such thing as finesse fishing for false albacore. Once again, when they’re feeding, it’s fast and violent, and they’re triggered by forage reacting to that violence. When albies attack, bait is showering in the air, swimming for dear life to get away. Therefore, a lure or fly slowly plodding along can look so unnatural that it’ll get refused. The trick, is matching speed with speed.

When you finally get a solid shot at a feeding school, let your lure hit, drop the rod tip to the water and reel like crazy. You cannot crank fast enough to make a metal jig or spoon outpace an albie, I promise, so go ahead and really burn it. Underwater, the fish are swimming so quickly as they eat, they’re just keying in on frantic movement and the flash of the live bait. This high-speed retrieve does the best job of matching what they’re already looking for down there.

If you’re casting flies, now is the time to lean on a two-handed retrieve. As soon as your Clouser or Deceiver touches down, tuck the rod in your armpit, point the tip at the water, and start stripping the line with both hands like you’re milking a cow at warp speed. The method takes a little practice to master, but you’ll never get a fly moving as quickly with a normal one-handed strip.

False albacore have incredible eyesight. If you think about, they have to in order to home in on tiny baitfish while moving at such high speeds. In the perfect scenario, there are so many albies around hammering bait that they indiscriminately slam whatever gets in front of them, but that’s not always the reality. Even though they might only have a fraction of a second to commit to your lure or fly, they see more than you might think in that fraction.

I can’t tell you how many times switching from 30-pound fluorocarbon leader to 20- or even down to 12-pound has made all the difference in the number of bites I’d score. Likewise, scaling my lure or fly up or down by just one size was the ticket for going from an occasional eat to a connection every time I got a good shot at a school.

Albies can be as selective as rising wild trout, and sometimes matching the forage at hand is a must, while other times you can get away with just being close enough. As an example, if albies are on bay anchovies, don’t assume they’ll crush the chartreuse Clouser they ate last time. Make the effort to match that bait with a brown-back Clouser. Likewise, epoxy jigs have become very popular for these fish over the last few years, and unlike classic metal lures, they come in a wide variety of sizes and colors so you can match the forage at hand as closely as possible.