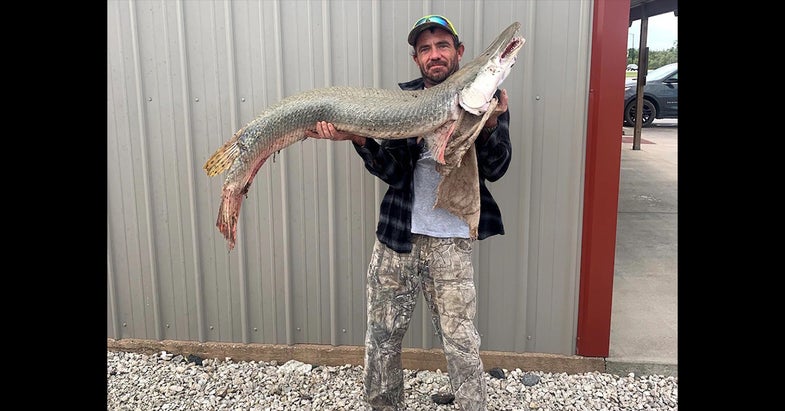 The alligator gar taped in at 4.5 feet long. KDWP
SHARE

Officials are investigating how an alligator gar was recently caught from the Neosho River in Kansas. It’s the first time an alligator gar was caught in the state, according to the Kansas Department of Wildlife & Parks (KDWP). Angler Danny Smith landed the 39.5-pound alligator gar that measured 4.5 feet long on a September night fishing trip in the southeast corner of the state.

Alligator gar are endemic to portions of the Mississippi River Drainage in southwest Ohio, southeast Missouri, Illinois, and in southern waters near the Gulf of Mexico. They’re also found in southern Oklahoma. Finding an alligator gar in Kansas is perplexing KDWP fisheries biologists. The Neosho River is a 463-mile tributary of the Arkansas River in eastern Kansas and northeast Oklahoma, and the Neosho’s tributaries connect with portions of the Arkansas and Missouri rivers, among other waterways.

“We’re confident the information from the angler is accurate and the fish was, in fact, caught from the Neosho River,” KDWP Fisheries biologist Connor Ossowski said in a press release. “However, that doesn’t mean the fish originated from the river.”

Though not in Kansas, several states have reintroduction programs to help the threatened alligator gar return to its native range. In those states, wildlife managers often chip-tag hatchery-reared alligator gar before releasing them. However, KDWP officials said the Neosho fish did not have such a marker and believe it is a wild fish.

“Because most populations of this species can be distinguished from one another with a sample of the fish’s fins, another option we’re considering is genetic identification,” said KDWP assistant director of Fisheries research, Jeff Koch. “This will tell us if the fish came from an existing population in another state.”

The Neosho is a long river with 12 low-head dams and two others that create lakes, including Grand Lake. The river was previously named the Grand when explorer Zebulon Pike encountered it on his visit with the Pawnee in 1806. Today, blue catfish, paddlefish, and largemouth bass are most often targeted by anglers there. Kansas has three native species of gar: longnose, shortnose, and spotted. Longnose are the most common and measure up to 5 feet long. But their heads and snouts are not as rounded and pronounced as the alligator gar, which can grow to more than 300 pounds and 8 feet long.

Koch said if the fin sampling for genetic ID of the gar is unsuccessful, the KDWP could use try using microchemistry, which involves comparing the element concentration in a bone sample with that of the river water. If the elemental samples show consistencies, biologists could determine how long the fish has been in the river. Officials also have not ruled out the possibility the alligator gar was released by someone who had it in an aquarium or tank. They’re still considering all possibilities: “It’s not unlikely that this fish was once somebody’s pet or purchased from a pet store, and simply released into the river once it became too large,” said Doug Nygren, KDWP Fisheries Division director. “These techniques should allow us to determine which mode of introduction occurred.”