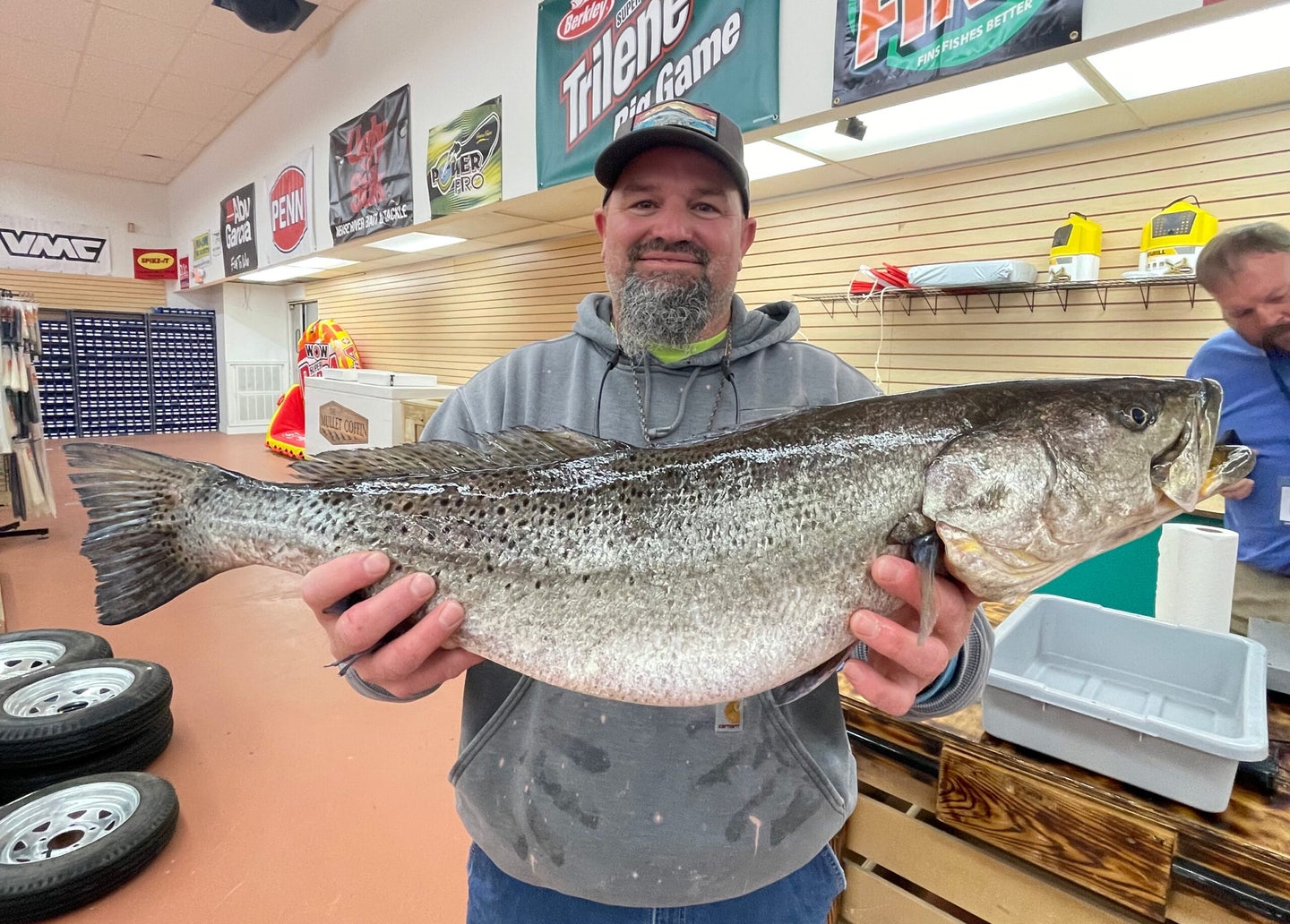 The record-breaking speckled trout had a length of 33.5 inches and a girth of 18 inches. Todd Spangler
SHARE

Todd Spangler of Merritt, North Carolina, just broke one of the Tarheel’s State’s longest-standing fishing records—with a fishing rod he made himself. On February 9, Spangler caught a 12-pound, 8-ounce speckled trout near the mouth of the Neuse River in Pamlico County. Spangler’s catch came on his first bite of the day and easily topped the previous state record of 12 pounds, 4 ounces, which was set back in 1961 at Wrightsville Beach.

Spangler and a buddy were fishing around the boat slips in a residential harbor at around 8 a.m. when Spangler hooked into what he initially thought was a striper. Since the recreational season for striped bass was closed in 2019 throughout a large swathe of North Carolina’s coastal waters, including the mouth of the Neuse, Spangler was anticipating that he’d have to release the hard-fighting fish after he brought it to the boat. “I said ‘if this is a trout, it’s gonna be one of the biggest trout I’ve ever caught,’” he tells F&S. “It came up and swirled once, but it was far enough out that we couldn’t see it well. I told my buddy to get the net just in case. I kept fighting it, and when I saw it flash right below us I said, ‘Man, that’s a big striper right there.’ Then it came up to the surface, and I saw that it was a trout, I went all to pieces. I said, ‘Oh, my lord. Get the net! Get the net!’”

After boating the fish, Spangler and his friend tried to resume fishing, but curiosity got the better of them. “My buddy said, ‘man, I want to find out how much that thing weighs,’” Spangler recalls. The anglers used a portable scale to get a weight of 12.52 pounds. Spangler says he was skeptical that the cheap scale was giving them an accurate measurement. And he had no idea what the existing state record speckled trout was in North Carolina. His friend looked it up online and delivered the news: If the scale was correct, Spangler had just topped state record by four ounces. They stashed their gear and headed to the boat ramp, then on to Neuse River Bait and Tackle in Grantsboro, where a certified scale also read 12.52 pounds. The official measurement, confirmed by a state biologist who arrived at the store a couple of hours later, came in at 12.50 pounds. The whopper had a length of 33.5 inches and a girth of 18 inches. Speckled trout are also commonly known as spotted seatrout.

“I had to walk away from everybody and collect myself, because I was like, ‘oh my lord, I can’t believe this is happening to me,’” he says. Spangler started building his own rods around ten years ago after taking a rod-building class offered by Mudhole Tackle. He finished making the 6-foot-6-inch medium action rod that he caught the speck on just a week ago. His setup also included a Daiwa reel spooled with 20-pound test Power Pro braid and a Z-Man shad jerk bait.

“It makes it a little more special that I caught the record fish on something that I built myself,” Spangler says. “It’s gratifying. I just finished it, took it out there, and this is what happens. To know that it just caught a state record just blows my mind.

“I hope the record lasts another 60 years,” Spangler adds with a laugh. “But I’m gonna go out there and try to break it myself tomorrow.”