A Trout Bum in the Making 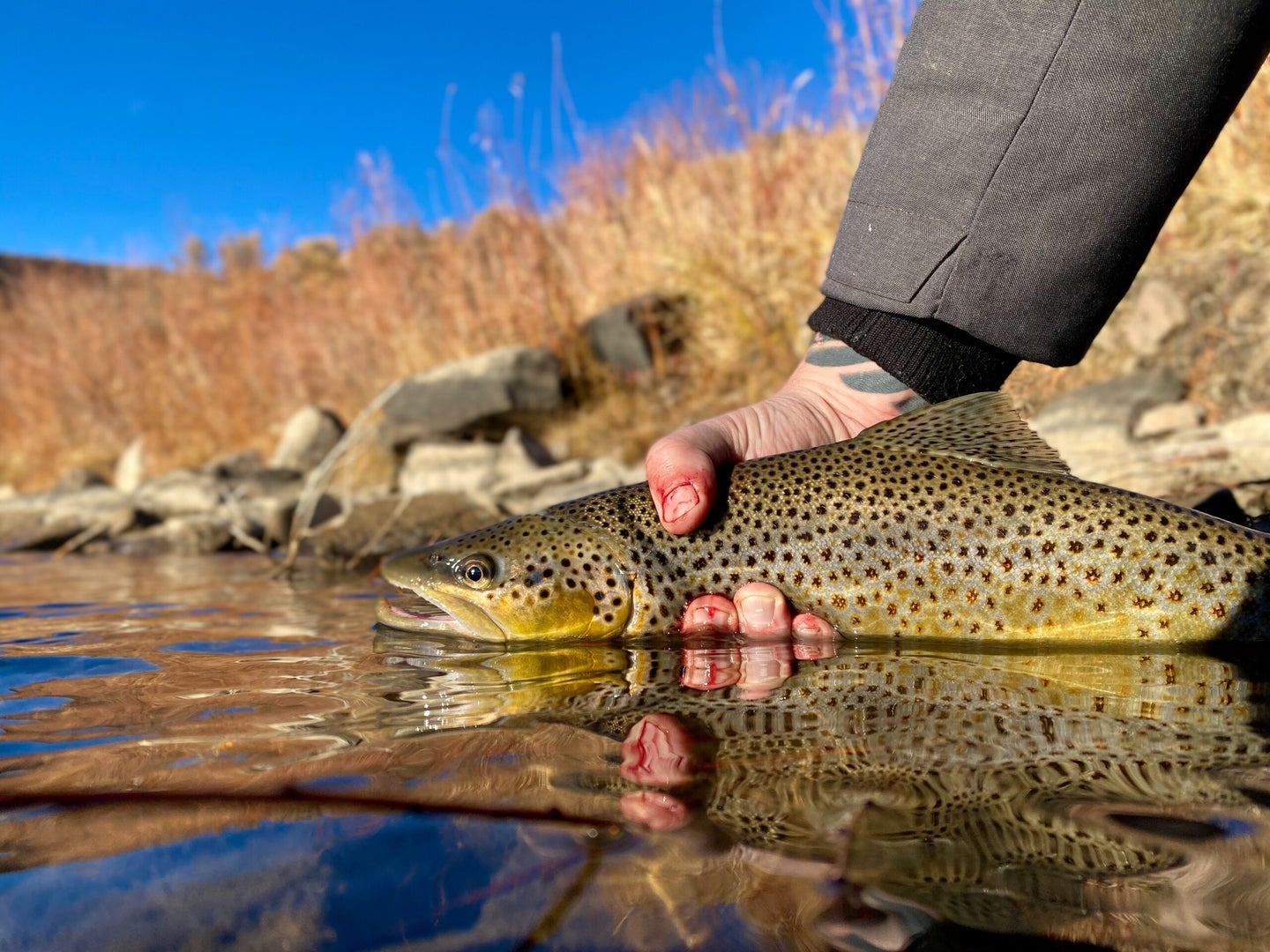 I dipped my hand into the Colorado River, a carry-over ritual from fishing for bass. “Tell me where you’re hanging,” I said to myself. The water was cold. So cold that my usual quarry would be deep and lethargic to the point of frozen in state. I wasn’t aware yet of how water temperature affected trout. “There’s no chance in hell I’m catching anything.”

My lack of confidence sprouted because this was my first time fishing for trout. As I cast a Rooster Tail toward the opposite bank, I said a quick prayer to the fish gods. The swift river swallowed my lure with a pointed slurp.

I’ve only ever fished for bass, crappie, bluegill, and northern pike. Trout weren’t on the menu in my neck of the Midwest. Rainbows, cutthroats, and browns all had a mystic quality to them, necessitating expeditions out West and demanding fly rods and flies—and patience, a virtue I was born without. Trout just always felt out of reach for this lake angler.

So when the opportunity to spend three weeks living along the Colorado River presented itself, I bit. Snow-dusted Rockies encircled my family’s temporary home, but, more importantly, I had access to nearly 5 miles of a pristine (and private) fishery. And even though I didn’t have a single shred of an idea as to how to catch a trout, I had to try.

The Rooster Tail spinning its way back toward me was a Walmart impulse purchase. I’d been sent to grab a winter coat for my daughter, but couldn’t help browsing the fishing department. A 1/6-ounce Worden’s Rooster Tail with a gold blade, rainbow body, and white-and-black tail jumped out at me. That vaguely looks trouty. I bought two.

My first few casts were all over the place. Instinct told me I should run the lure across the bank; the warmer, shallower water giving way to the deeper ambush zones should be perfect. Well, perfect for bass. After that didn’t produce a strike, I cast toward all my go-to spots: across the bank, toward an old bridge support, and the base of a drainage system. Not a nibble.

Another series of casts fell in quick succession. I started twitching the lure as I reeled, hoping to trigger a reaction strike. A half-hour came and went with nothing to show for it. Rock-hopping from boulder to boulder, I made my way downstream. Time to switch tactics, I thought. I started snapping the rod, burning the rooster tail through the clear river. The lure came into view about 4 feet from where I stood when a dark shadow pulled up behind and took it. I set the hook.

The fish made a run toward a rocky outcropping, but didn’t break off. Less than a minute after the strike, I brought the rainbow trout onto the shore. Elation washed over me as I stared at the superb fish—its oranges and pinks, streaks of blue and touches of purple and bright silvers. I got the fish under control just long enough to take a photo, then released it back into the river.

The fish now gone, I sat down on a rock and played the scene over. For months, I’d been cooped up, sheltering in place, afraid of the outside world. Here, at this moment, I could breathe without an ounce of anxiety. My stress dissolved. My appetite, however, was only whetted.

I couldn’t wait for my next trout.

The next day, I hiked up the river, casting along the bank as I went until I came to a bend. Across the river was what appeared to be a shallow, calm section. The pool gave way to a torrent of burbling water moving across the riverbed. I cast the rooster tail into the hole—and seconds later, my second trout bit. The rod tip bent, the line tightened, and I was fighting the fish, as well as the current.

A minute or more elapsed between strike and landing with me staring at another beautiful—and slightly bigger—rainbow. I let out a quick, “Whoohoo!” before releasing the fish back in the water.

Fish came fast and furious for the next hour. I landed 11 rainbows, but had one miss that practically ripped the rod from my hands. Monsters were in there, and I could barely contain my delight when I arrived back at the house at sunset.

Several days passed before I could dedicate a few hours to fish again. I decided to hike a couple miles upriver and eventually found a promising spot. Set beneath an old mine tunnel lay a section with a deep, slow pool on one side, calm water in the middle, and fast-moving eddies up top.

I fired my lure into the calm water, but nothing wanted it. I made another cast, this time slightly more upstream, and burned the bait through the water. A large dark shadow appeared—and smacked the lure. I knew immediately that this fish was different from the 1- to 2-pound rainbows I’d been catching.

The trout put up a strong fight—diving into the pools, rising to the surface, jumping to try and spit the lure—but I gave no ground. After a few minutes of it rising and falling, I eased the tired fish to the bank. Darker in color than the others, and far bigger, I realized then that this wasn’t a rainbow. I’d just caught my first brown trout.

In my hands, the fish felt about 4 or 5 pounds, and looked at least 22 to 25 inches. The fading sunlight bounced off the trout’s dark-brown hues. Its jaw was more hooked than the rainbows I’d caught, and as I removed the hook, I nicked my thumb on its teeth.

I took my time releasing the fish, studying its dorsal fin hanging just above the shallow water. The fish felt tired, but there was still power in its muscles as it wriggled back and forth in the current before swimming away. Later, as I was walking back to the house, I felt the blood still dripping down my finger. I wiped it across the rod’s cork—a badge of honor I won’t soon forget.

The One That Got Away

I became obsessed with that brown trout. I wanted that fight again. But I spent my last week in Colorado in utter frustration. As we edged closer to our last days, I became despondent. I was still catching fish, but the high of the brown’s fight, its coloring, and the hope I could land one more was fast disappearing. My wife shooed me out of the house more and more, while my daughter asked “You ok, Daddy?” when I came back in looking sad after getting skunked again.

With our departure just a day away, I’d all but given up. I stayed within a few hundred yards of the house and stopped looking for new spots where a brown could be hiding. I cast my lure along the bank and into a deep trench out of which I’d pulled a nice rainbow. I let the lure sink about 4 feet down and I started a slow retrieval. That’s when the line went taught, and my rod doubled over.

I kept tension while I adjusted the drag to a stronger setting. Zigging and zagging, the fish did all it could to cut the braided line across the jagged rocks beneath the water. As I reeled, I jumped from rock to rock to get a better handle on the fight and bring the fish to the surface, but every time I got it close, it’d rail back into the depths. The first minute of the fight felt like 10. One minute later, and the fish was close enough to the surface for me to see it—another brown, and a heck of a lot bigger than the first.

I hooted and hollered as I fought the fish toward the bank. I couldn’t believe it, the fish I’d been waiting for was on my line, right there, just a few feet from landing. I’d done it!

As I brought the brown onto the shallow bank of slippery rocks, I reached with my hand. But with one hard tail flick, the fish spat out the lure, flopped for a second, and vanished back into the depths. I’d lost that final fish-story of a fish—the one I’d tell about to all my friends and family for years. I may be still telling that story right now, but it doesn’t feel as good as I imagine it would if I’d landed the fish and had a picture as proof. Right now, it just feels like a fish story. All bluster, no proof.

Just after I lost the fish, I sent a message F&S editor-in-chief, Colin Kearns: “Gonna cry, lost the biggest fish I’ve ever hooked 6 inches from my hands. Went foot into the freezing waters to try and get it. And we’re leaving tomorrow. Had to be longer than 25 inches and at least 5-7 lbs.” Kearns’s response: “Oh, man… I feel for you! But that’s only gonna make the story of your eventual trophy even better.”

He wasn’t wrong. The possibility of a trophy brown trout now has me hungry to go after more. Since then, I’ve since switched up my gear—new reel and rod, a bigger assortment of Rooster Tails—and my family moved to Utah’s Heber Valley, where there’s a world-class trout river that runs through the mountains. And while I didn’t move us here specifically for the fishing, my time in Colorado inspired me to go after more of this amazing fish.

I can’t wait for my next trout.