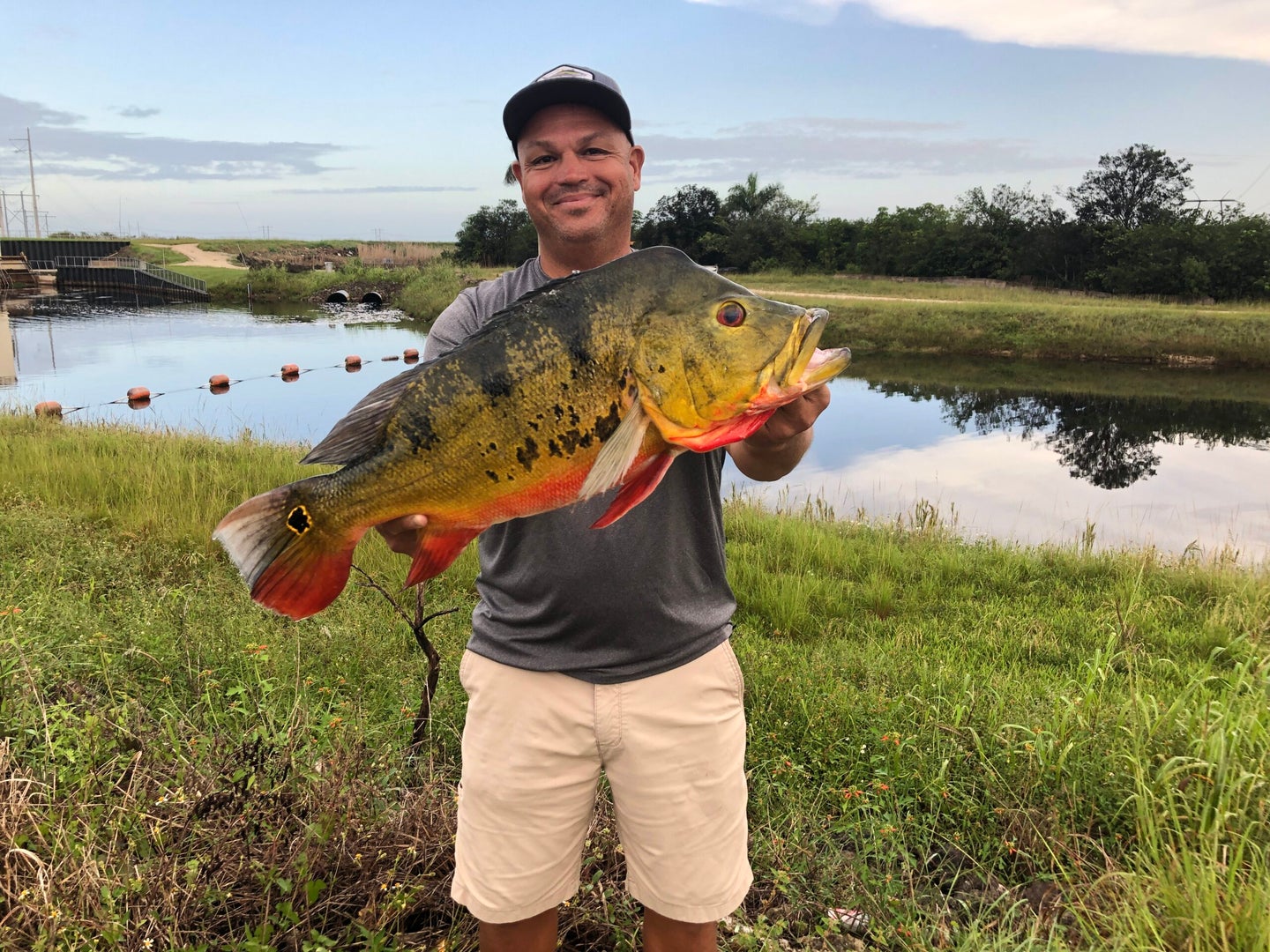 This lunker peacock bass broke a state record that was set in 1993. FWC
SHARE

After Felipe Prieto waded waist-deep into a Florida pond to keep the biggest bass of his life from breaking his line, then endured a sleepless night before officials could weigh his catch, the devoted peacock bass angler came away with a new state record—a 9.11-pound monster. Prieto was fishing a Broward County pond on October 8 when he hooked the fish around 5:30 p.m.

“I had caught three or four [bass] and was walking around looking over the bank ledge to see if I could spot any free swimmers I could pitch at,” says Prieto, who was using a live shiner for bait. “I didn’t see any, so I just pitched to a random spot and the line started peeling out of my hands at a hundred miles an hour. When I set the hook, I could feel that I had a really big fish on.”

Butterfly peacock bass are the only species of nonnative freshwater fish to ever be legally established in Florida waters. They were introduced to coastal southeast Florida by the Florida Fish and Wildlife Conservation Commission (FWC) in 1984 to help reduce the number of undesirable nonnative fish like spotted tilapia. They thrived in the region’s warm, slow-flowing freshwater canals, lakes, and ponds—and they’ve done their job keeping a lid on the exotic species released into Florida waters by aquarium owners. According to FWC biologist John Cimbaro, stomach-content analysis has shown that spotted tilapia can make up over 75 percent of the peacock bass diet.

The flamboyant, aggressive South American fish has also proved popular with anglers. “We don’t have recent economic numbers, but I can tell you that people travel from all over the country to fish for them, and they contribute millions of dollars to the South Florida fishing economy,” says Cimbaro. “They are very colorful and most people who fish for both largemouth bass and peacocks consider the peacock to be a harder fighter.”

Prieto, who has been chasing peacock bass for more than 20 years, concurs: “One of the reasons I fish for them so much is the thrill of the fight. They’re basically a largemouth bass on steroids,” he says. “They’re ferocious. They are very, very aggressive hitters and very hard fighters. You have to use top-notch gear or you won’t land them. They are that strong, and I love that about them. They make you work.”

When Prieto’s record peacock bass tried running into some rocks and drainage pipes in the lake, the angler decided it was time to get wet. “I had to walk out almost waist-deep into the pond to keep him from breaking me off,” he explains. “[The bass] gave me a good two-and-a-half-minute fight before I actually saw him jump out of the water and try to shake the hook. That’s when I got a glimpse of how big he really was. It was just incredible.”

After the first jump, Prieto was able to work the fish toward the shore and, eventually, onto the grassy bank. “Once I had him in my hands, I knew he was either a record or close to a record,” he says. When his Boga Grip scale flashed a weight above 9 pounds, Prieto knew he had a decision to make: Either submit the bass for state-record consideration, which would mean taking it the next day to FWC officials or let it swim free. Prieto initially decided on the latter. He returned the fish to the water and spent 15 to 20 minutes trying to revive it, but it wouldn’t recover. “I guess he gave it all in the fight,” says Prieto. “He couldn’t come back, and that was the final straw for me making the decision to submit him.”

After a second scale pegged the fish at 9.11 pounds, Prieto knew it was going to be close. The Florida state record for peacock bass was 9.08 pounds, a record that had stood since 1993. FWC regulations require that fish between 5 and 10 pounds top an existing record by at least a half-ounce, which is .03 pounds, to dethrone an existing state record. “I didn’t sleep all night,” Prieto recalls. “I was thinking that if that fish lost a couple of ounces, it was not going to make it.”

But the next morning, FWC biologist Barron Moody certified Prieto’s catch as Florida’s new state-record peacock bass with a weight of 9.11 pounds, which was exactly one-half ounce heavier than the standing record. The fish taped in at just over 23-inches-long.

“It was pure joy. I couldn’t believe it,” says Prieto. “I’ve put in so many hours fishing for peacock bass that to come upon a fish that is actually a record is amazing. I’ve caught 7-pounders, 8-pounders…I’ve caught so many fish that were close, but to actually be over, I was in shock. I’m still in shock today, to be honest.”

Butterfly peacock bass populations are flourishing in Broward and Miami-Dade counties, where water temperatures are reliably high enough to sustain the cold-intolerant species. The species has also been gaining footholds as far north as Palm Beach County because of recent mild winters. Prospects for continued good fishing look bright. FWC biologists have already documented even bigger peacock bass than Prieto’s record. “We’ve seen fish as large as 12 pounds,” says Cimbaro. “So the challenge [of catching an even bigger state record] is still out there.”