The Season: Biting Back

In something of an act of vengeance, the author and his buddies decide to go after sharks months after pods of blacktips spoiled a day of albacore fishing 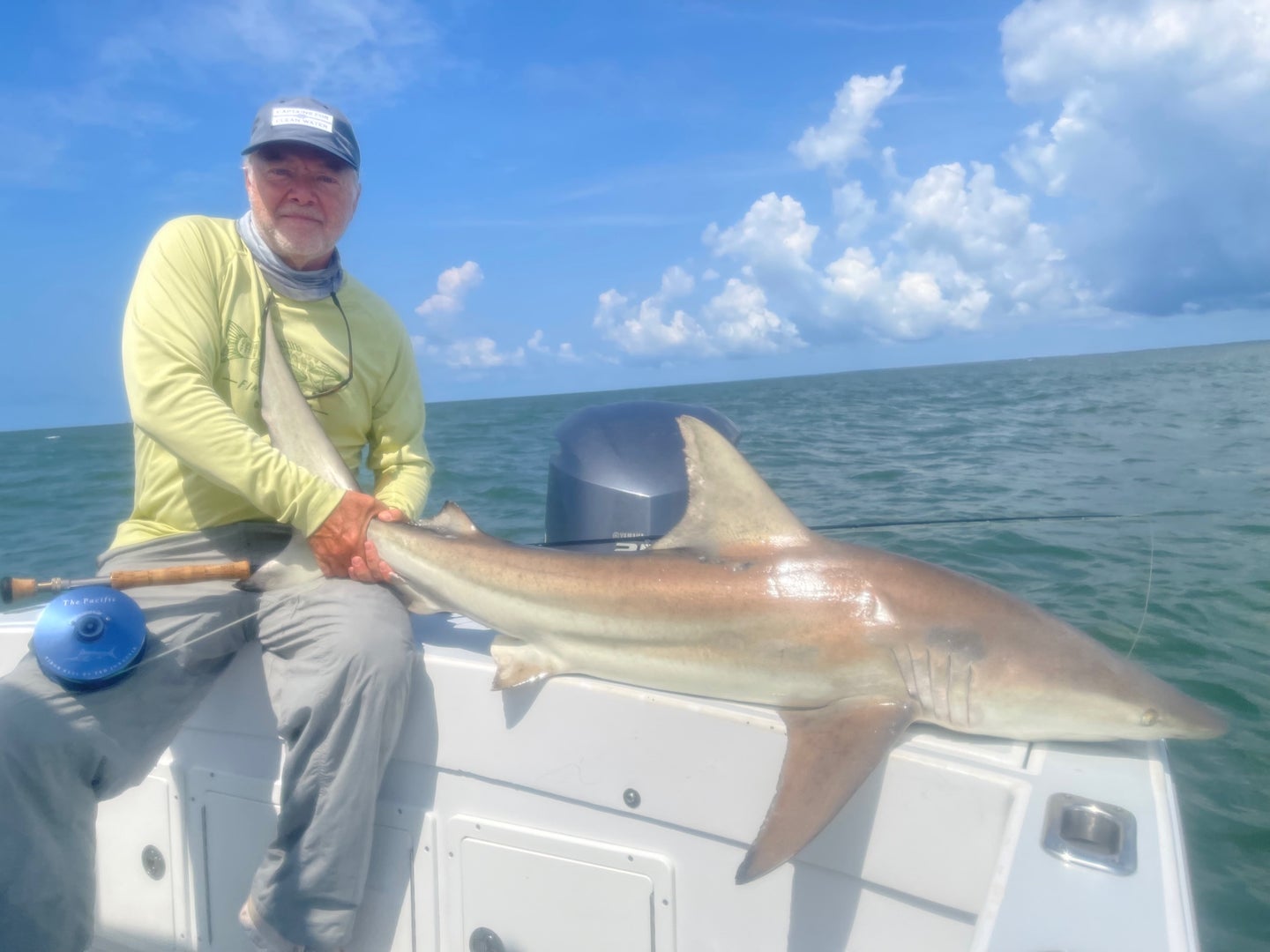 The author with a nice blacktip shark. Nick Roberts
SHARE

“We’re looking for an EF5 Sharknado,” Captain Gifford Scott said, dumping a 5-gallon bucket of bloody chum water over the gunwale. “These onesies and twosies don’t really cut it.” He scooped another bucket of seawater, and swished a bleeding false albacore around in the slop. Ten feet behind the boat, a pair of Spanish mackerel fluttered near the surface, rigged hookless and clipped to a line from a spinning rod—their flanks shredded to release an extra load of scent into the water. When the sharks came, Scott teased them with the chum, jerking the fish out of reach as I cast a fly into the swirl.

When the sharks come… That’s something I hadn’t wished for before. But last fall, my pal, Nick Roberts, and I spent half a day wishing sharks away off Cape Lookout, South Carolina. Pods of blacktips crashed our false albacore party, snatching three hooked fish at the boat, shredding fly lines, and scattering our target fish. At first, it was thrilling to see so many predators, but we soon tired of losing hard-fought albies. In the months since, we’d been plotting our revenge, and now here we were: Off the coast of South Carolina, where I had a 14-weight fly rod in hand, loaded with a simple, large blood-red craft fur fly, with greasy, bloody chum baits flagging behind the boat. We put our backs to the sun so we could see the sharks coming.

“It’s funny,” Roberts said, scanning the rollers 50 feet behind the boat. “The thing that you don’t want is suddenly the one thing you’re hoping for.” We both stared into the ocean. “Come on, tax man,” Roberts said. “We’re ready for you this time.”

The tax man… The man in the gray suit… These are euphemisms born of a shark’s propensity to take a bigger bite than it deserves—and maybe show up when it’s least welcome. And almost on cue, a shark appeared, surfing down a roller, the color of a cigar, with a pointed snout and a just-stopping-by attitude. It snubbed the fly twice, turning away when it was mere inches from the hook. We knew the drill. Sharks bite much better when there’s more than one. Competition riles them up. And this was a fine-toothed shark, which tend not to participate in the fishing game altogether.

But competition wasn’t hard to find. Within a few miles, more than a half-dozen shrimp trawlers were hauling nets and culling their catches. Behind them, bottle-nosed dolphins porpoised in the cull slick. Gulls and terns wheeled and dove. Sharks can’t pass up the easy meal of dead and disoriented fish that results from trawling, but it’s a matter of finding which boat has drawn the crowd.

Behind a second trawler, Scott let out the chum teaser. Two minutes later, the sharks showed—one behind the boat, then another off to port, its fin knifing the surface, a more menacing demeanor. My first cast was right in front of the target—which was not what I wanted. Sharks have eyes on the sides of their heads, so they don’t see very well straight ahead. I picked up the fly and dropped it a second time, maybe 12 feet behind the boat, ahead of the tax man and off to one side. The blacktip turned and arrowed in. I held my breath. Unlike those of most fish, the mouth on a shark can be a half-foot away from the tip of its nose. I watched the red fly disappear, then, out of nowhere, the second shark snatched the fly nearly from the mouth of the first.

In an instant, the water exploded. The broom-handle-stiff fly rod turned al dente as the shark streaked off, loose coils of fly line in herky-jerky loops until the line straightened and the reel zinged. The blacktip didn’t hit the brakes until it peeled off 150 feet of fly line and backing, then swapped ends and charged the boat.

I crabbed to the bow, reeling furiously, then gave up on the reel handle and stripped in great grabs of fly line four feet at a time. The shark torpedoed under the boat, and I barely cleared the bow, fly rod bent double, as I took the fight to the other side.

And this is what I wanted: A big fish, a strong fish, a fish to fight. If anything, fly fishing for sharks is solid practice for fishing for brutes like tarpon or golden dorado. (Like I ever fish for golden dorado….) Sharks are willing and plentiful in my waters, and will leap and run and burrow to the bottom. Like this one did, after a pair of searing runs. Fighting a shark might make for a decent stand-in for a tarpon on the line, but at some point, it becomes good practice for trying to pull a sofa out of the water with a fly rod.

“Ground and pound,” laughed Scott, as the fight turned into a winching operation. “That’s the game now. Be careful what you ask for.” But when the fish surfaced, and rolled to its side, and cried uncle at the boat, I’m glad I got what I came for. A quick photo and a bonus—this shark was tagged, so we note the tag number to turn into the state fisheries department.

Then Nick was up. The chum bucket was ready. The sharks were feeding. Revenge was sweet, if costly. My new 14-weight sharking rod should show up any day now.