How To Be Ready for Any Fall Fly Fishing Condition

Fall fly fishing is by no means a slam dunk. But you can beat unpredictable conditions if you know a few tricks 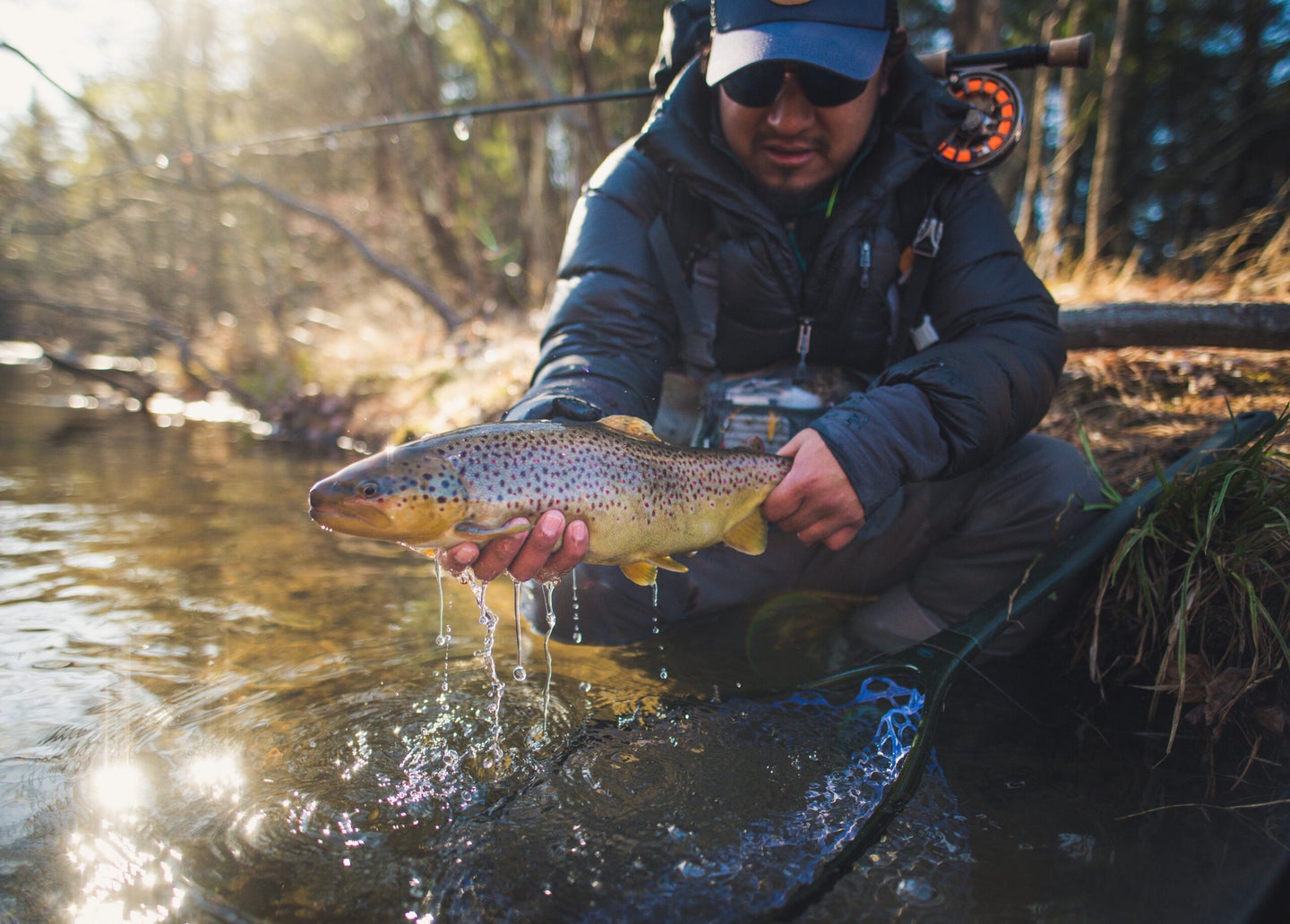 Fall fly fishing can be lights-out if you prepare for the conditions. Cavan Images via Getty Images
SHARE

We fly-fishers really look forward to the fall, with its cool weather and big trout. But when it arrives, it races by at breakneck speed, or at least that’s how it seems to me. Once the streams begin to cool down and the trout become vigorous again, how many weekends do we have before the snow flies? And once we’ve managed to schedule a few free days to enjoy the season, will nature assure we have ideal fishing conditions?

The answer to the second question is “fat chance.” Fall is an active time for weather, and we can expect everything from mini-heat waves to what feel—after the summer—like deep freezes. It may be dry, or it may pour. It will probably be windy. Autumn’s flies may or may not hatch.

Still, tons of good fish are caught every fall.

The secret to success in unpredictable conditions is to prepare in advance—to have the gear, the flies, the clothing, and the techniques for the various scenarios ready to go. Here are some of the situations you may encounter over the coming weeks, and what you can do to make the best of them.

Use the Right Dry Flies and Leaders in Low Water

In many places, summer winds down warm and dry, making for skinny rivers and spooky trout well into October. That doesn’t mean the trout won’t feed on hatching flies. But it does mean you need to be really careful if you want them to feed on your flies. Long leaders, tapered to as fine as you dare—6X or even smaller, unless you’re especially likely to get into heavy fish—and small dry or emerger-style patterns are usually in order. Blue-winged olives are the most common mayfly in autumn rivers, and flush-floating, slim-bodied flies like parachutes or Compara-duns are the best styles to use. Casting upstream so you’re behind the fish and out of sight is always a good idea. Casting downstream can be even more effective, especially on calm water; be sure to throw some slack into the cast so the fly drifts naturally down the trout’s feeding lane.

Not all autumn aquatic insects are tiny. In the East and Midwest, you may still find Isonychioa mayflies in sizes 12 or even 10. More likely, however, you’ll see what are often called October caddis flies. The true October caddis is a western hatch, but similar big caddis flies are found across the country, usually in a Halloween-appropriate orange color. As with all caddis, a soft-hackled wet fly representing the emerger is a better bet than a dry fly, but both will work.

How to be ready: Floating fly line; 12-foot leaders; spools of 6X and 7X tippet, preferably fluorocarbon. You should have parachutes, Compara-duns, cripples, or RS2 flies size in sizes 18 to 22, along with a few brown mayflies in 12 and chunky orange dries or soft-hackles, also in 12, for the caddis. Pheasant Tails or other slim nymphs in the same sizes will be necessary if fish aren’t rising. Before the really chilly weather sets in, beetle, hopper, and ant patterns will take trout when no aquatic insects are active.

All it takes is the remnants of a tropical storm or a line of strong thunderstorms ahead of a cold front to blow out your favorite streams. You may still find rising fish in stretches that remain relatively calm despite the increased volume and flow, but rain-swollen rivers generally call for subsurface fishing. For many anglers, that’s not disappointing. Fall is a great time to fish weighted nymphs or streamers, down deep where the big trout lie. Rivers running high with rain may look inhospitable to trout, but except for the most extreme floods, trout generally hold comfortably and feed well when their rivers swell. The heart of the current may be too much for them, but pockets of “soft water” will provide safe harbor.

I recall a vivid example while fishing a wide river in the southern Adirondacks in New York. The main channel was running hard enough to float an F-150, but I found a side pocket not much bigger than a billiards table, stripped an olive Woolly Bugger across it just under the surface, and caught trout after trout. Most of the time, you need to explore these pockets with nymphs and streamers that sink readily. Be thorough, because every pocket or seam can hold a fish. Use heavy nymphs or streamers on stout leaders, cast well upstream so the fly will have sunk to near the bottom when it reaches your target water, and try to keep a tight line to detect strikes.

How to be ready: Floating, sink-tip, or full-sinking fly lines; 7- to 9-foot leaders for nymphs, shorter for streamers, tapered to no finer than 4x, and don’t be afraid to go heavier, especially with all-but-invisible fluorocarbon. Tungsten bead-headed caddis pupae, mayfly-style nymphs like the Frenchie and Gold-Ribbed Hare’s Ear, Squirmy Wormies, and Mop Flies, along with your favorite streamers, can produce.

(Of course, nymphs and streamers are very effective in the deeper sections of streams at their normal levels. This is especially true in the fall, as trout feed ravenously, the way bears gorge on berries to pack on weight for the long winter ahead.)

Make the Most of Fall Trout Spawning Behavior

Late summer and fall are when all six species of Atlantic and Pacific salmon leave their “oceans,” be they freshwater or saltwater, and swim up their natal rivers to spawn. These fish often bite less out of hunger than aggression. They’re pairing up, chasing off rival suitors, and guarding nests from egg-raiders. And while rainbow trout, known as steelhead in their migratory form, spawn in late winter and spring, they too often ascend the salmon rivers in the fall to join the party and feast on drifting eggs dislodged from nests.

Salmon and steelhead anglers in the Pacific Northwest and the Great Lakes know this situation well and have developed specialized tactics and gear for it. The gear and tactics translate easily to our local trout streams, because resident trout spawn, too. Bouncing patterns that imitate salmon and trout eggs along the bottom, with the help of one or two split shot on the leader if need be, is a very effective approach as the days get short and the water cools down into the 40s. These flies need to be deep, and a strike indicator can really improve your chances of detecting takes and striking in time. Streamers from Woolly Buggers to Game Changers will draw the ire of the procreation-obsessed trout, and a sinking line with a short leader will keep the flies swimming among the trout rather than gliding over the heads. But then there is the dedicated breed of anglers who swing large wet flies, such as Intruders, with two-handed rods, hoping with remarkable patience to find a fish willing to rise from the streambed and attack. You can do it with trout, and you don’t need a two-hander. But you do need the patience.

How to be ready: Floating lines are fine for indicator nymphing and will do for weighted streamers; if it’s an option, an intermediate or full-sink line is nice for streamer fishing. As with high water, there’s no need for finesse leaders. Glo-Bugs, Sucker Spawn, and other egg patterns aren’t usually weighted, so have an assortment of split shot to help them sink. Hefty trout are often caught at this time of year, and a 6-weight would not be overkill, but your standard trout rod will probably be fine.

Dress for Chilly Fall Weather and Long Days on the River

Late October rain is a different experience than summer rain. The precipitation won’t necessarily spoil the fishing, or at least not until the rivers start to look like chocolate milk, but getting soaked to the skin in chilly temps will probably spoil the fun. River valleys sometimes shield anglers from the worst of autumn wind, but in open country, the gales will disrupt your temperature (to say nothing of your cast.) Know the forecast and dress accordingly.

How to be ready: Good non-cotton socks and base layer under wool or fleece pants and tops will keep you warm but not clammy. A modest down or synthetic puffy jacket under a good breathable rain shell will usually do for outerwear; your waders, of course, will help. By late November you’ll probably want a warm hat and gloves, fingered or fingerless as you prefer. Don’t hesitate to reel up and take a 10- or 20-minute walk if you get the shivers; the fish will still be there when you get back. Finally, if the wading is at all challenging where you plan to fish, please consider some extra traction for your feet, either pull-on cleats or good quality screw-in studs, and a wading staff. Falling in cold water can be dangerous. Stay upright and enjoy the whole day.