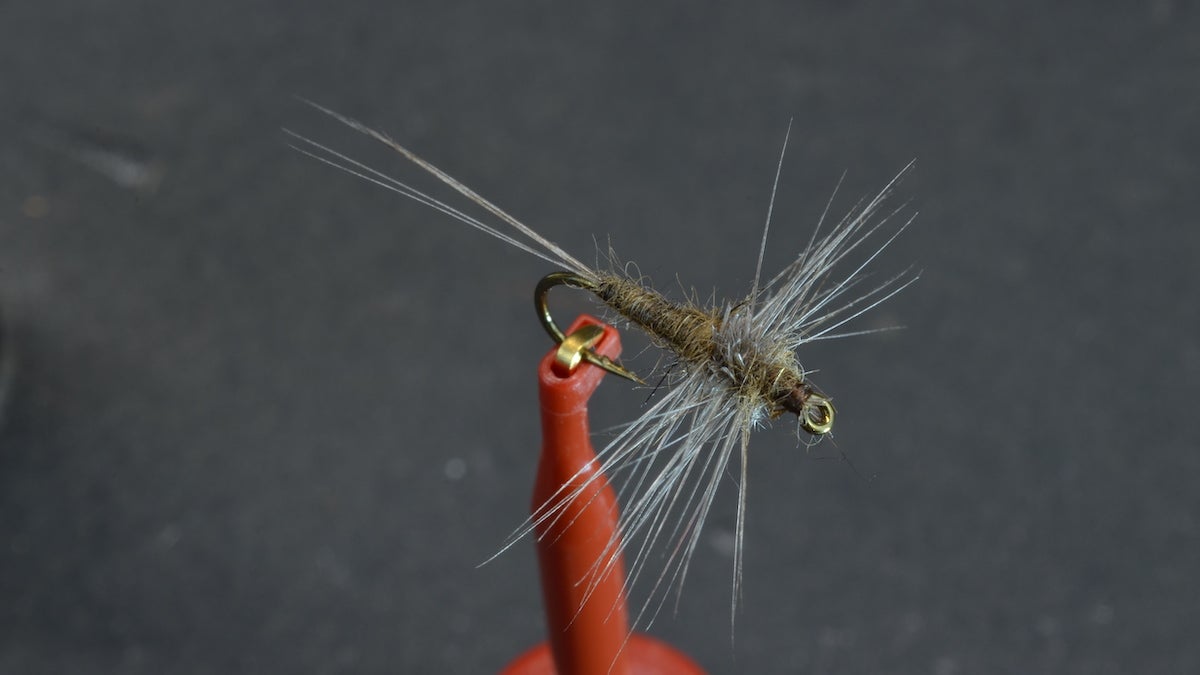 A spinner fall is the driest of dry-fly fishing. It’s when trout aren’t watching for flies that swim up from the streambed, but rather for flies that drop from the sky.  Sure, some spinners, as spent mayflies are called, slip below the surface and are eaten there. But a spinner fall—the mayfly mating swarm that ends with flies floating helpless on the water, their wings lying flat—mostly means bites at the surface, right where so many of us want to catch our trout. And it’s 100 percent mayfly, the fly for which fly-fishing is named; caddis flies and stoneflies and midges don’t do this sort of thing.

Flies used for this fishing all have the same basic design: slim body, long tails, horizontal wings. The main variable is what the wings are made of. Some tiers use the tips of hackle feathers, attached perfectly symmetrically. Many use bundles of polyester or nylon fibers, which are much easier to manipulate than finicky feathers. Some tiers go with natural materials, employing little sprigs of cul de canard duck feather, snowshoe hare’s foot, calf tail, or deer hair.

I only make spinners like this one, with trimmed hackle. In my experience, feather tips, CDC, poly, and Antron wings are too flimsy. These wings need to play both imitative and functional roles, and a certain amount of stiffness is required for them to work as outriggers keeping the fly afloat. Snowshoe hare and calf tail are better, but also bulky, and deer hair wings are tricky to make.

I wing my spinners by wrapping on a good dry-fly hackle, then clipping off the top and bottom, leaving only wings sticking out the sides. For one thing, it feels like the easiest method. But also, the wings don’t droop or clump, as long as the hackle is good and stiff.

Hackle-wing spinners are devilishly difficult to see on the water, but somehow that seems right. Real spinners are just as hard to spot, unless they happen to float right past your leg. Spinners are, after all, the most slender and ethereal of mayflies, and I think the barely-there look of a hackle-wing in the surface film best matches the natural. Enough trout have agreed for me to stick with the design.