Come autumn, ducks and bucks get all of the attention. But don’t sleep on the addictive chaos of a boat-bloodying, baitfish-puking false albacore blitz 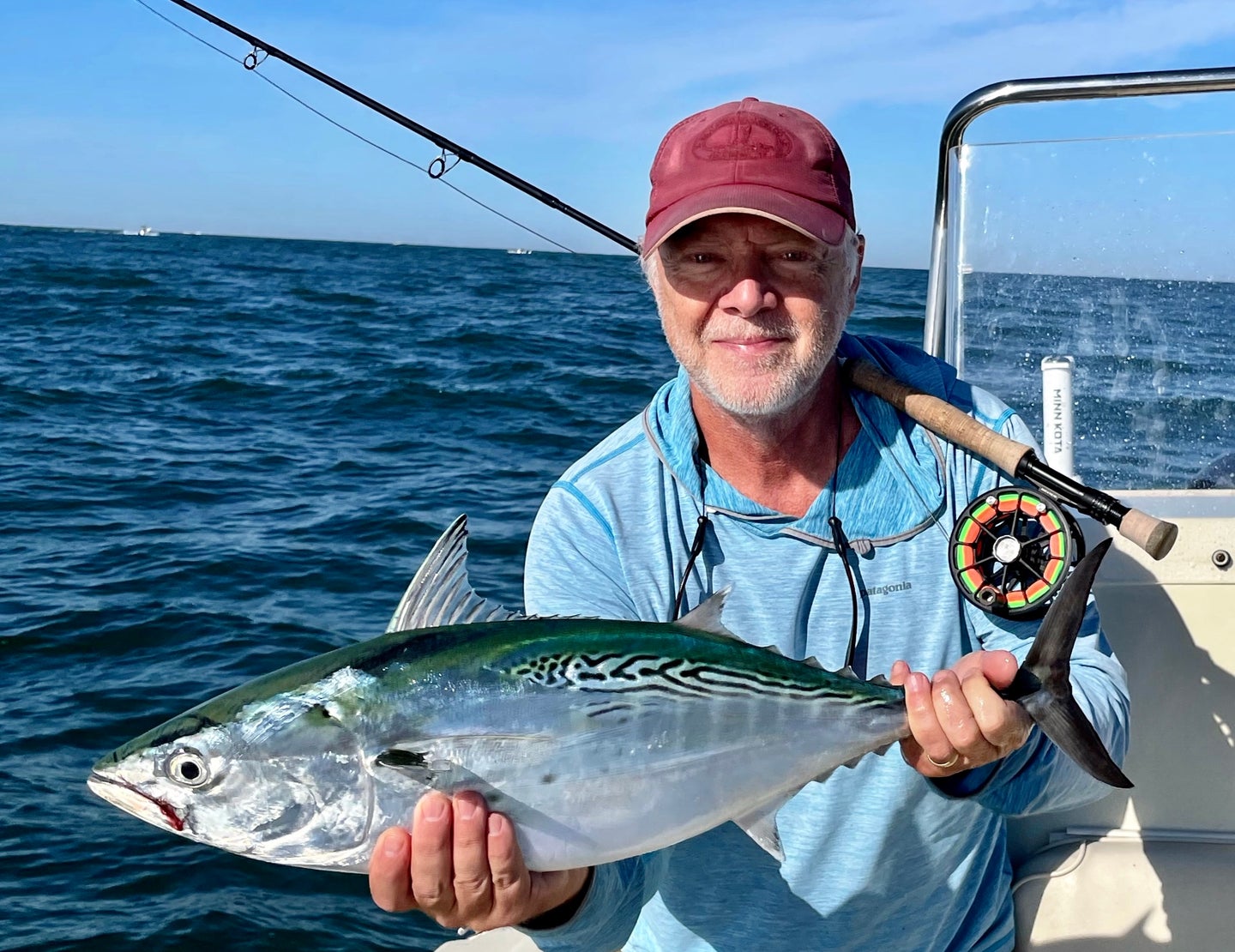 The author with a false albacore. Steve Love
SHARE

“The Season” is a new online column from F&S editor-at-large T. Edward Nickens. You can also follow Nickens’ adventures on Instagram @enickens.

The feed built like a gathering storm: Three fish crashing bait here, a small school knifing through the chop over there. Then more around the boat, and suddenly the birds appeared as if they’d hatched from the waves like giant mayflies—terns and gulls wheeling and diving. Where in the world did they come from? Boats streamed in from inshore and offshore as the false albacore showed en masse. Foaming water close and far, more birds, more bait, more boats, more everything.

My buddy Steve Love crouched on the casting deck, rocking in the slop. With so much bait and so much chop, the albies shed their typical aversion to the boat, showering silversides all the way to the hull, slashing bait within an arm’s reach.

Fish on top, fish on the sonar, fish all around. On the radio, a guide cackled through the static: “Could be THE albacore blitz of the season!” No one answered, bent to the task of putting hooks into false albacore.

This is what I’d hoped and planned for, why my kitchen table at home had been transformed into a fly-tying bench for weeks, why I’d worked late and early to meet my deadlines and hoarded gas money for the outboard: the wild abandon of a full-blown false albacore feed.

For my working vacation, I’d relocated to the North Carolina coast, but the false albacore season is a scene up and down much of the East Coast at one time or another. Just as the leaves turn color and the bucks are on the move, cooling water pulls clouds of baitfish out of the Pamlico, Albemarle, Core, and Bogue sounds. It’s a free-for-all of silversides, anchovies, and menhaden, and the false albacore patrol the beach, corralling bait, waiting for whatever switch it is that turns them on and steers them to the surface. In years past I’ve ping-ponged between trying to catch albies and trying to kill deer and ducks, but this year I turned away from serving multiple masters and went all in on fly fishing for albacore. For 10 days, I’ll work when it’s blowing and fish when it’s not.

“There he is!” Love hollered from the boat, but it was an unnecessary announcement. When a false albacore hits the fly and feels the hook, there’s only one place it wants to be—the far side of the horizon. That first blistering run of an albacore on the fly is the addiction, but those first five seconds after the hit are when everything that can go wrong can go wrong fast.

Love grips the 9-weight and holds it away from his body, as the coils of fly line rip through the guides. It’s a frantic dance to free the line from the deck and around his feet, for there’s no stopping the green-backed freight train running for its life. It’s only when the line goes tight and the fish is on the reel and the drag zings and whines that he looks around and catches my eye that the expression on his face tells the story: Unreal.

The weird thing was, 24 hours earlier I was skunked on the same piece of water. Just the day before, I met the sun rising over Cape Lookout and ran 30 miles chasing popcorn fish—those aggravating instances of albies surface-feeding for a second or three, then vanishing. I was alone on the boat, running up and down the beach and seeing fish rise and disappear forever, hour after hour. Even the guides were lamenting. On the radio, guides groused about the lack of bait, the lack of a feed, the lack of action. On Instagram that night, lots of virtual back-slaps:

Inspired by my anglers they never gave up.

A dispiriting day. But what a difference a day makes. And a wind change. And whatever flips the switch for these fish. Three hours of nonstop crazy, then the tide ends with the boat splattered in fish blood and projectile-vomited baitfish. The console was awash with shattered flies and lengths of sheared leader. There were even beers left intact in the cooler—a definite sign of an epic day.

These are the gifts of November, the hinge in the great turning from autumn to winter. The Northern Hemisphere leans away from the sun. The days wane and cool. Birds, fish, bears, insects—all of the wild senses the shift. And on the North Carolina coast, for those struck with albie fever, it’s now or never and there’s no time to waste: The rifle opener for deer is but two weeks away.