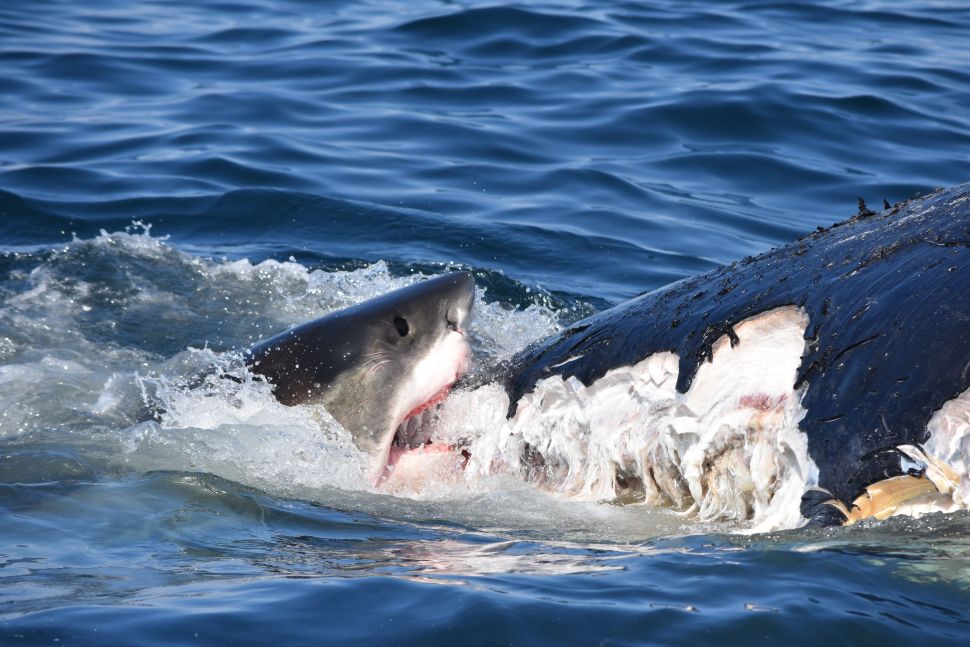 The death of a humpback whale set off a great white shark feeding frenzy in mid-August off the coast of Massachusetts. Marine biologists from the Massachusetts Division of Marine Fisheries (MDMF) and the Atlantic White Shark Conservancy (AWSC) had been out studying basking sharks in the 842-square-mile Stellwagen Bank National Marine Sanctuary when they heard that a dead humpback whale had been spotted nearby. The research team led by Greg Skomal, a noted shark expert, rushed to a scene that one scientist called “unimaginable.” They captured the rare video below of the apex predators rising out of the water to tear hunks of blubber from the dead whale.

“It was nature in action,” research ecologist David Wiley told LiveScience. “Everything dies for something else to consume. Nothing goes to waste.” The researchers observed at least 8 great whites feeding and successfully tagged 5 of them with acoustic tracking devices that will provide important data on shark movements. Six of the sharks were already known to and named by the AWSC team—Iceland, Mark, Pipit, Right Eye, Skyline, and Web. Two large females were previously unknown to researchers, including one absolutely giant 18-footer.

“One of the hardest things to communicate to people is how massive white sharks can be,” shark biologist John Chisholm wrote in a tweet. “Until you see one in person, it’s hard to appreciate the girth, which may be more impressive than length.”

Researchers were also able to identify the dead whale, which was a cataloged but unnamed calf born in 2020 to Venom, a well-known female humpback. Wiley said that the one-year-old whale most likely died as the result of human interaction, such as an encounter with a large boat or a fishing net.

The feeding frenzy also grabbed the attention of Cape Cod whale-watching boats. “It was the first time I had ever seen this happen,” Captain John Goggin told the Boston Herald. The rarity of observing this type of scene is partly due to the short-lived nature of the phenomenon: Once scavengers strip the buoyant blubber, the remaining carcass quickly sinks to the ocean floor. “Although upsetting to many, the death of this young whale will sustain many other organisms,” wrote Chisholm. “It provides an important windfall for the blue sharks, white sharks, and sea birds. Once it sinks, the benthic community of critters will also benefit from it.”