This year, while others are deer or duck hunting, you might just land the biggest king of your life 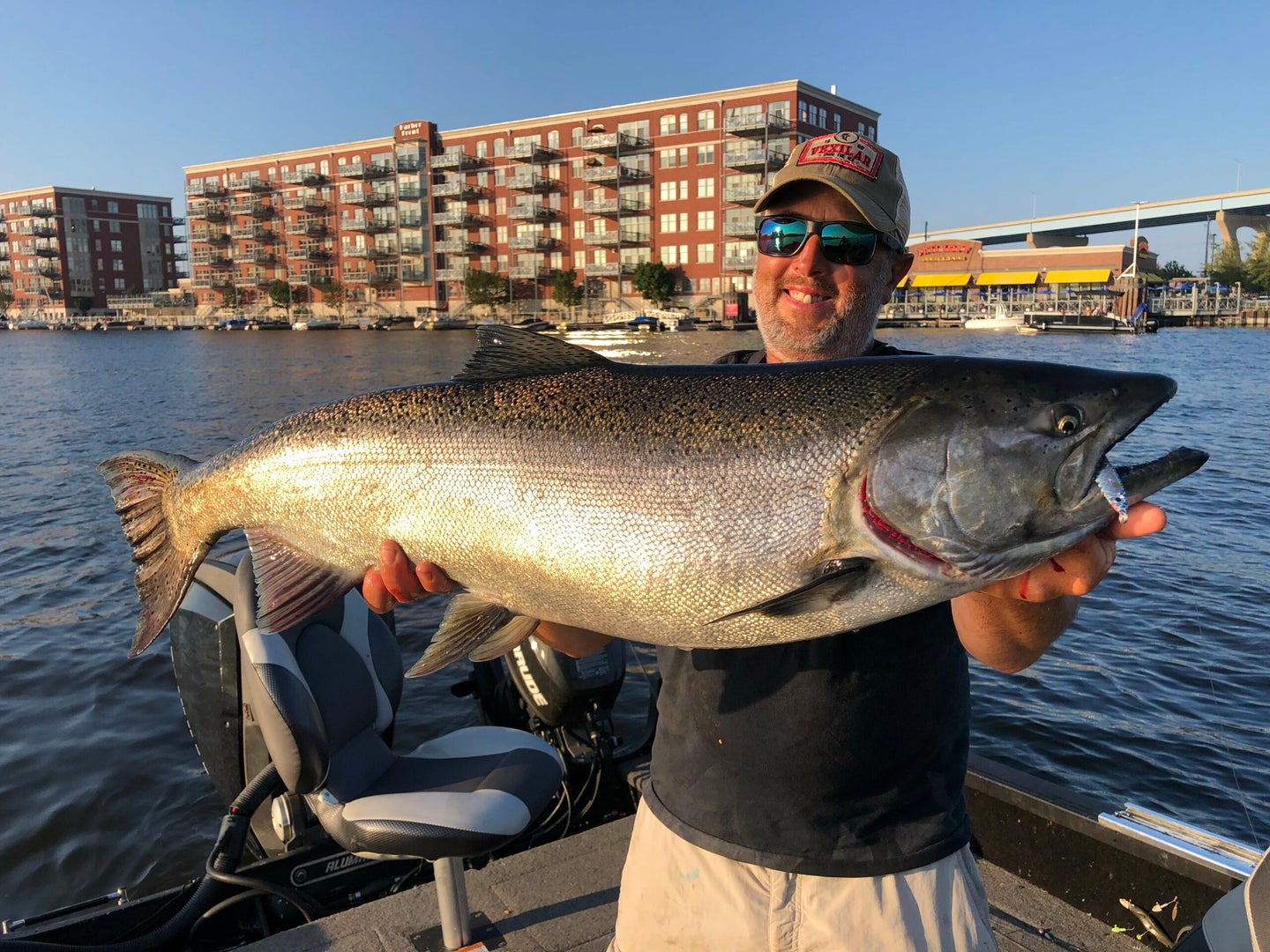 The first cool fronts of August portend more than the promise of falling leaves and migrating geese. They usher in a unique window of opportunity for big Great Lakes salmon and trout. Eric Haataja knows all about this. The multispecies fishing guide chases big fish year-round in his home state of Wisconsin and elsewhere, but early autumn on Lake Michigan marks one of his favorite periods. And many anglers—whether by boat or from shore—can capitalize on this bite.

“This is definitely one of the best times of the year to catch very big fish,” Haataja said. “If you have not tangled with one of these fish, it’s a must to try.”

Chinook and coho salmon aren’t native to the Great Lakes but have been stocked for decades and continue to support a thriving sport fishery. They behave much like their native Northwest cousins by spending summers feeding in vast areas of open water. Then, when they’re old enough, they migrate up tributary streams and rivers to spawn in autumn.

According to the Wisconsin Department of Natural Resources, Lake Michigan king salmon typically spawn after two to four summers in the lake. Haataja said those fall-run fish average about 17 to 22 pounds. Cohos generally spawn at 2-plus years old—after two summers in the lake—but some male cohos will spawn after only one summer. Haataja said autumn cohos usually run about 4 to 8 pounds.

Along Wisconsin’s Lake Michigan shoreline, fish stage during early fall at many ports and harbors from Door County south to the state line near Kenosha. Similar opportunities abound at tributary mouths in other Great Lakes with good salmon populations. The seasonal change might begin in late summer and typically peaks as fall progresses.

“If you start getting west winds and some rain and cold water temperatures in August, the fish are going to start showing up there,” Haataja said. “Everything is dictated by the wind direction, which changes the water temps, which moves the fish around. I usually start in September at the pier heads and river mouths, where all the fish are staging.”

King salmon typically arrive near tributaries first, followed by cohos. Kings usually outnumber cohos at harbors and river mouths, although anglers sometimes find good numbers of both during years with cold water temperatures. Action at port and river-mouth areas usually lasts about two weeks to a month, depending on conditions, but Haataja said patterns can change quickly.

“My philosophy with fall staging fish is they can be here today but gone tomorrow, meaning they’re staging here today, but you get rain overnight, and they’re gone, heading up the river tomorrow,” he said. “They’re moving, but they’re not hard to locate. That’s the good thing.”

In fact, Haataja said, locating staging salmon with electronics or even general observation might be one of the easiest aspects of the pursuit.

“It’s a very angler-friendly time of year,” he said. “In a boat, use the side-imaging on your fishfinder. If you don’t see them there, just look around. A lot of times, they’ll be jumping and porpoising kind of like a trout or tarpon, coming up and then going back down. They’re a very visible fish, so if you’re around them, you’ll see them coming up. If you don’t see anything on your graph or coming up, don’t fish there. Get out of there. Go to the river mouth. Go to the harbor. The fish will tell you where they’re at through your electronics or your eyeballs.” And after you’ve found salmon, the fun begins.

Read Next: 8 Vintage Stream Flies for Salmon and Trout

How to Catch Salmon in the Great Lakes

Read Next: How to Fish Spoon Lures in the Fall

“A lot of the baits that seem to work well in fall kind are fire-tiger, chartreuse, lime-green or even an orange pattern,” he said. “You can’t go wrong with fire-tiger, really.”

When fishing from a boat, presentation options expand considerably.

“When I troll in fall, you can catch them on spoons, and you can still catch them on a flasher-fly combo,” Haataja said. “You can catch them on J-Plugs and crankbaits. All work really well in the fall. When you’re casting or jigging, you can get them by vertical jigging with a jigging spoon or a plastic. Or you can also get them fishing (cured salmon eggs) under a float or straight beneath the boat. And I’ve also done well using alewives in fall that I’ve caught and used for bait.”

The choice of methods might depend greatly on conditions. Haataja said water temps in the mid- to upper 50s are ideal. In slightly warmer water—low 60s—fishing can still be good, but salmon tend to be more finicky and difficult to catch.

“If the water temperatures are fairly warm and there are more fish on the outsides by the lake instead of inside the harbors yet, I might troll crankbaits,” he said. “If the water cools down and gets really cold, sometimes I’ll troll J-Plugs and spoons more. And when the water is warmer, I like to fish more at night. When the water is cold you can get them all day long.”

“You’ve really got to be ready gear-wise, because they will spool you,” Haataja said. “Typically, you’re looking at a minimum of like a 2500- to 3500-size reel with 30-pound braid. And a 15-pound fluorocarbon leader is a pretty safe bet. Also, if you’re fishing for fall kings, make sure you bring an extra spool of line with you in the boat or from shore, because they’ll run you all over the place.”

Fishing After the Spawn

As autumn progresses through September and into October, salmon will migrate up tributaries to spawn, followed by other fish species. About mid-October, Haataja will ditch his boat, don waders, and start hitting streams and rivers to target those fish, typically using spinners.

“After the kings spawn, the coho salmon will migrate upriver to spawn, followed by brown trout and steelhead,” he said. “For salmon, the prime river fishing is during the middle or end of September into October. For brown and trout and steelhead, it’s late October, November, and December—any time the river is open. It’s a great opportunity to catch multiple species of fish in the same day, all from shore.

Of course, many anglers give fish a break during fall, trading their rods and reels for bows or shotguns. This year, consider giving in to the allure of knuckle-busting action on monster salmon. The deer and ducks will wait, and your autumn efforts might net the fish of a lifetime.