The recent expedition could have uncovered up to 40 undiscovered species 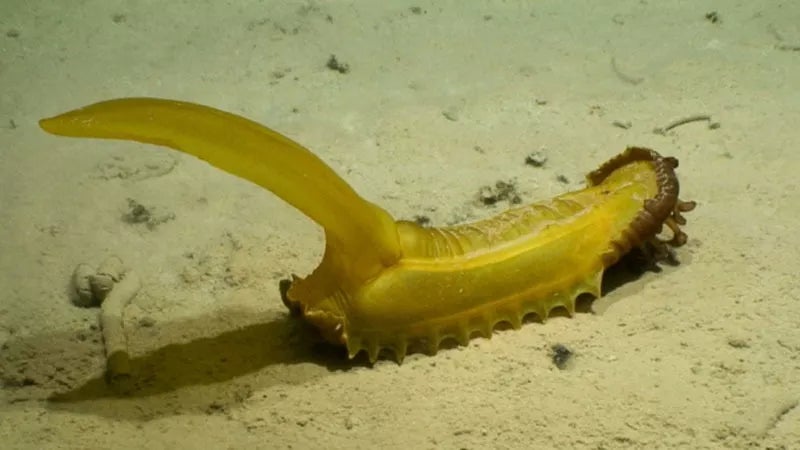 At one end of the biological spectrum are charismatic megafauna, those “flagship species” that inspire the devotion of conservationists and the manufacture of cute, cuddly plush toys sold in zoo gift shops. On the other are critters so homely or baffling they inspire a different kind of wonder.

It’s easy to guess which end scientists with the Natural History Museum (NHM) of London were working when they used a remotely operated vehicle to explore the edge of an abyss more than 16,000 feet below the surface of the Pacific Ocean. As detailed in a paper published July 18 in the science journal ZooKeys, the deep-sea expedition discovered a mother lode of oddball organisms previously unknown or under-studied by science, including an elastic, banana-shaped sea cucumber called a gummy squirrel and a sea sponge that resembles a tulip.

The creatures’ evolution in the harsh conditions of the deep ocean—where they survive despite crushing pressure, no light, and a dearth of nutrients—gave rise to bizarre adaptations that remained remarkably consistent for eons.

“One thing that always strikes me is that a lot of these lifeforms we see haven’t changed much over the course of millions of years, which is crazy to think [about],” Guadalupe Bribiesca-Contreras, an NHM biologist and lead author of “Benthic megafauna of the western Clarion-Clipperton Zone, Pacific Ocean” told Live Science. “Many of these species we’ve seen as fossils, and they look exactly the same now.”

The gummy squirrel—so called because it supposedly resembles a squirrel-shaped gummy bear—has a sail-like appendage on its back and multiple rows of tube feet along the bottom and sides of its 2-foot-long body.

The ability to observe these uncommon creatures in their natural habitat, rather than in the fossil collections of natural history museums, was one reason for the expedition, which brought back specimens of 55 creatures, most never before collected by science. Nearly 40 may turn out to be newly discovered species.

Scientists also hope to better understand the biodiversity of the barely explored area as interest in deep-sea mining grows. The Clarion-Clipperton Zone, a 2.3-million-square-mile area between Mexico and Hawaii, features a mixed topography of seamounts, troughs, hills, and fracture zones that creates habitat for a wide range of sea life. It’s also seen as a promising target for mineral extraction.

The researchers call for further studies to help inform management plans to protect the area. “The little information we have about this environment and the species that live there makes it very difficult to know how damaging mining could be,” Bribiesca-Contreras said.