The Best Late Fall Trout Flies According to Fishing Guides 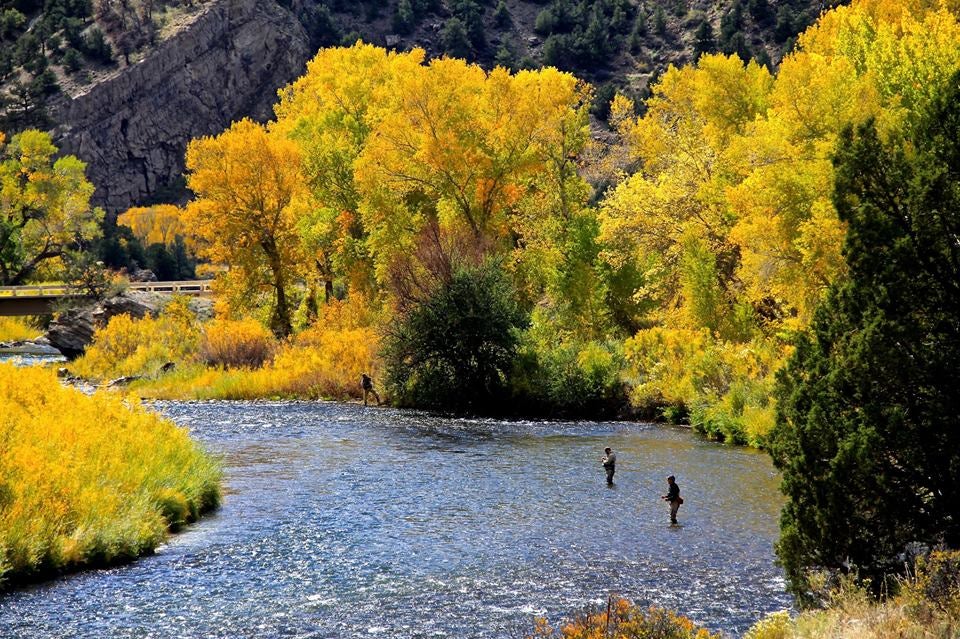 Fall is a great time to land a giant. Morgan Lyle
SHARE

It was mid-October. Rachel Finn answered her phone on the bank of the West Branch of the Ausable River. The head guide at the Hungry Trout Fly Shop was fishing for fun on her day off when I called.

“When it’s overcast and not windy—oh look, there’s a rise—the Blue Winged Olive is definitely a go-to for me in the fall,” Finn says. “Right now, it’s just not so right.” So rather than a dainty size 20 dry fly, she was picking the Ausable’s legendary pockets with a store-bought, meaty, old-school nymph.

Fall trout fishing is like that. Technical dry-fly fishing with spider-web tippets is over, for the most part. Governed by the urge to spawn and the instinctual awareness that winter is coming, “these trout are getting feisty,” as Rachel puts it.  “The fish are aggressive and territorial and interested in getting things out of their face.”

When landlocked Atlantic salmon run up the Ausable and other tributaries of Lake Champlain in the fall, Finn greets them with her articulated modern version of the venerable Grey Ghost streamer, updated with marabou instead of the traditional hackle-feather wing. Meanwhile,  she has dusted off another classic to put in the trout’s faces: “I started fishing Woolly Buggers again, and I haven’t fished them in so long. Everybody’s got ‘em. They’re standards for a reason.”

The same dynamic plays out across the country’s trout regions.

“Fall in Northern Michigan for resident trout is streamer time, 7-weights and 250-grain sink tips,” says Chuck Hawkins, owner of Hawkins Outfitters in Traverse City, Michigan. “My favorite fly this time of year is a fly I created, the Nutcracker. A deer hair sculpin head, some marabou, and a little flash with a rabbit strip tail. The head creates turbulence that gives the tail lots of movement.”

It’s hard to imagine a trout being able to resist all that lifelike movement. But Hawkins Outfitters guides have found distinct color preferences on Michigan’s storied trout rivers: “Olive and white on the Manistee River, black on the Pere Marquette, and yellow with brown head on the Au Sable River in Northern Michigan,” Hawkins says.

Colorado has labeled about 325 miles of its rivers as Gold Medal trout water, and the Arkansas River accounts for nearly one-third of the statewide total. You can expect about 2,000 trout per mile, most of them wild browns, and if you want to catch them in the late fall, you’ll need to use flies designed for deeper water.

“Late fall fishing on the upper Arkansas river centers on the trout moving out of their feeding areas of summer and concentrating in the spawning and wintering water. Surface feeding falls off and the game is deeper nymphing in those areas,” says Stuart C. Andrews, head guide at ArkAnglers, outfitters with locations in Buena Vista and Salida, Colorado. “By this point in the year, correct depth is the main variable, with stout headwinds a close second.”

ArkAngler’s guides recommend the Jigged Tungsten FB Pheasant Tail in size 10 to 14 for general mayfly-caddis nymphing. It sinks readily, rides with the hook up, and pheasant tail is a proven fish-catcher. Midges become increasingly important as water temperatures drop, and Andrews recommends the Zebra Midge in black or red, size 18 and 20 to imitate them.

Capitalize on the brown’s autumn aggression with the Pine Squirrel Mini-Leech. Small enough in sizes 12 or 10 to drift under an indicator, it can also be swung or stripped, and the pine squirrel fur provides superb movement. “Territorial brown trout are quick to respond,” Andrews says. In all cases, use fluorocarbon leaders from 7.5 to 9 feet.

In California, steelhead and brown trout are the main attractions in October and November, says Zachary Miller at The Fly Shop in Redding. The rubber legs that so effectively trigger big browns in the Adirondacks have a similar effect on the same species in the McCloud River, as part of the TJ Hooker.

“This fly is an absolute workhorse, combining the fish-catching power of the Pat’s Rubberlegs (a very close relative of the Girdle Bug) and the Woolly Bugger,” Miller says.  “I can count on one hand how many small trout I have caught on this fly. This pattern catches hogs. On the end of a tight line or beneath an indicator, trout simply can’t resist.”

As in much of North America, California trout feast on an October caddis, a robust bug that shows up toward the end of the season—creating an environment for reliable dry-fly and emerger fishing. Miller recommends the Posse Bugger, a stout-bodied wet fly with a sizable bead. “The Posse Bugger is a classic pattern that works really well when these large caddis start running around, and trout eat ‘em up,” he says.

When chasing steelhead, Miller employs a Burnt Chicken, an articulated wet fly/streamer in the style of the Intruder, with the same translucent design and lifelike action. Thrown on a 12-foot, 6-inch 6-weight Spey rod, this fly hunts everything from the rocky tail-outs on the Trinity River to boulder-riddled runs of the Klamath,” he says. “Black and blue is the classic, but the fish here have a soft spot for copper, so my first cast in any run will be with a black and copper Burnt Chicken.”

You can’t go wrong with any of these flies, but heaven knows there are many more that will serve you well in the late fall. You may in fact need the Blue Winged Olives and the spider-web tippet if a stretch of mild weather inspires the flies to hatch and the trout to rise. Mostly, you’ll want streamers and nymphs; here are some basic guidelines to keep in mind when buying or tying for the chilly days when the last of the leaves fall.

What To Look For In Late Fall Flies

1) Tungsten is Your Friend For Late Fall Flies

The heavier your flies are, the more quickly they’ll drop to where the trout are holding. Tungsten is the metal of choice for maximum weight, although old-fashioned brass beads with lead or lead substitute wire on the hook shank will help, too. There’s an ever-greater variety of tungsten sculpin heads, shrimp bodies, and hook-inverting beads (for fewer snags and upper-jaw hookups) available today.

2) Movement in Your Flies is Key

The tail of a streamer swishing side-to-side or the nervous wiggle of rubber legs may well be the design element that convinces fish that your fly is a living thing and therefore worth eating (or attacking.) Rubber appendages, squirmy worms, marabou, bunny, and pine squirrel strips are the most common fly components to give a fly life, but there are others. It’s hard to imagine a more lifelike motion than Blane Chocklett’s Game Changer, for example.

Read Next: 19 Ways to Avoid Pissing Off Your Fishing Guide

3) When Temps Are Low, Go Slow

As stream temperatures fall through the 40s and aquatic insect activity trails off, trout are less likely to chase things around. But they’ll bite if a tasty treat or an annoying pest is within range. Fish thoroughly, and be ready to strike on every drift of your nymph or swim of your streamer.