Video: Fisherman Drives Off With Ice Fishing Shanty—With His Buddy Still Inside 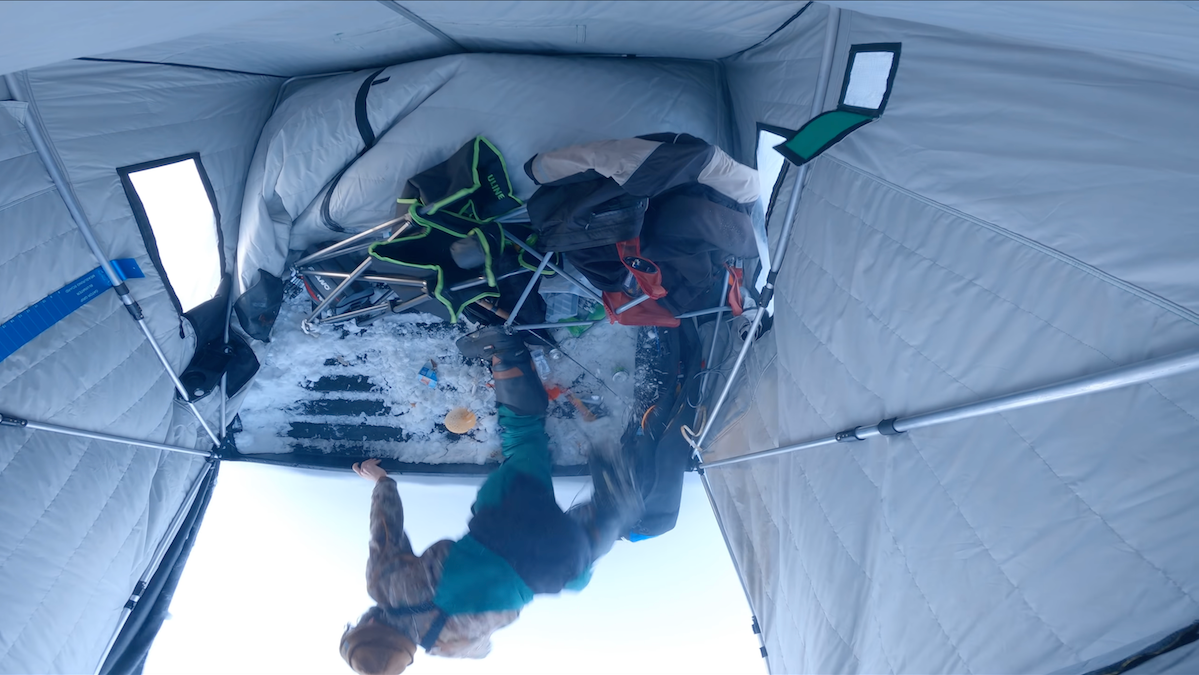 Seth Trobec had to bail out of the moving ice fishing shelter. Get In There Outdoors, via YouTube
SHARE

I crack up every time I watch the video, and I must have seen it 20 times now. Pro tip: Slow it down to half- or even quarter-speed. It’s even funnier. We’re out on the ice with Seth Trobec and his buddy, Cody Mjolsness, on Lake Canisteo—an old mine pit stocked with trout in northern Minnesota, not far from Grand Rapids. Mjolsness, who is headed out to pick up another buddy back on shore with his snowmobile, tells Trobec, ”I’ll be right back.”

“Yep,” says Trobec, closing what appears to be an ammo box and settling in to keep fishing. It’s the standard ice fishing set up: folding chairs, a little propane heater, extra duds scattered about, a radio playing, a GoPro running in the background. Trobec’s hoping to catch another lake trout, maybe one bigger than the 30-incher he hauled in a few days ago. The snow on the lake was thick that day, he told me.

“Cody probably figured he’d have to gun it pretty good just to get going.” Around 38 seconds in, we hear an engine start, popping and revving like a chainsaw. By now, Robec is standing up inside the house as he ties a rope off to its aluminum frame.

Two seconds later, the house shakes. Mjolsness has obviously neglected to unhook the sled from the snowmobile. “Hey!” yells Trobec, trying to alert his buddy. “HEY!” But it’s too late. The house takes off, with Trobec in it. It passes by an auger and a couple more fishing rods on the snow.

Trobec quickly decides he’s seen enough and bails out headfirst into the whiteness. It is, quite simply, epic; a ho-hum day turned upside down in a heartbeat. But the clincher, the thing that makes this a legit contender for America’s Funniest Home Videos? It’s Trobec’s scream, a drawn out “HEYAHHHHHHHHHH!” as he jumps.

It’s kind of like a WWII paratrooper at 10,000 feet yelling as he exits the plane over occupied France. It sounds like a man screaming what he knows may well be his last scream. And there’s just something about that scream that makes this video endlessly watchable. Coupled, of course, with the fact that nobody got hurt.

Trobec was kind of amazed at that himself. “We didn’t even lose any gear,” he said. “Just the lure that was in the water that snapped off where the line got cut at the edge of the hole.“ I recommend that you save this video. On those days when you’re sure that nobody has it worse than you, it’s a reminder that at least one guy does.