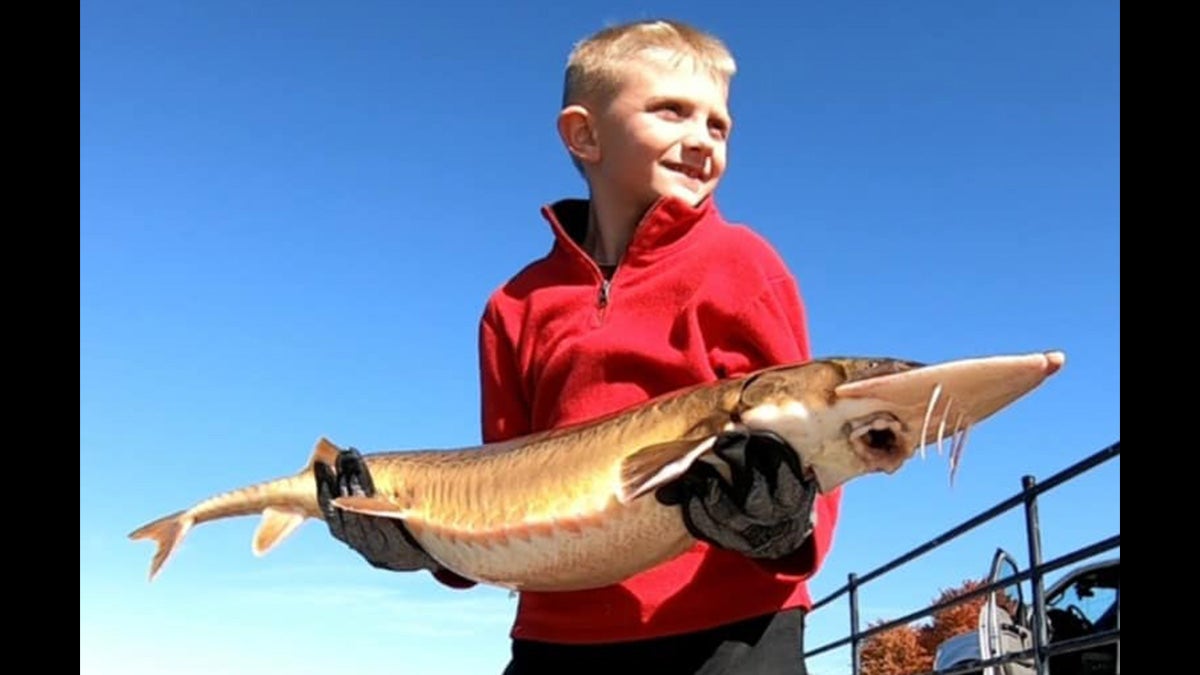 An 8-year-old Illinois boy boated a potential world record shovelnose sturgeon on the Rock River in October. Kashten Gustafson caught the sturgeon, which weighed 11 pounds, 13 ounces, while fishing with his father, Troy Gustafson, and uncle, Marty Gustafson, near the Quad Cities.

Shovelnose sturgeon are found only in the United States, primarily in the Missouri and Mississippi river systems. Unlike some sturgeon species, which can top 20 feet and 2,000 pounds, the shovelnose typically stretches no longer than 40 inches and maxes out at around 10 pounds. The current International Game Fish Association all-tackle world record shovelnose weighed 11 pounds, 9 ounces, and was caught in Loma, Montana, by Forrest Patrick Garrett Croff on May 30, 2020.

Pending world record aside, Kashten’s catch also topped the Illinois state record for shovelnose sturgeon by more than a pound. The current state record was set last December on the Rock River with a 10-pound, 8-ounce fish—and it was caught by none other than Kashten’s uncle Marty. Remarkably, Kashten is the third person in his family to break the state record for the species. His father briefly held the state mark after catching a 9-pound, 14-ounce shovelnose in November 2021, until Marty Gustafson beat that on December 12, 2021.

According to the Quad City Times, the Gustafsons were night-fishing on the Rock River on October 23. Kashten was reeling in a fish when another rod was hit. After his dad netted the first fish, Kashten grabbed the second rod and shouted, “It’s a big one!” A digital scale showed 12 pounds even, and they put the sturgeon in their boat’s live well until they could get to a certified scale the next morning to record the official weight, which was 11 pounds, 13 ounces.

“He had been telling everyone about how he was going to catch a bigger sturgeon than me,” Troy Gustafson wrote on the family’s Team Catfishing Adventures Facebook page. “We put the boat in right about his 8:30 p.m. bedtime…The fish grabbed a big ball of worms and ran upriver. [Kashten] cranked on it and as soon as he caught up with it, he immediately told us to get the net.”

The Gustafsons successfully released the fish back into the Rock River, and Kashten has big plans for future outings on the waterway, which is clearly a shovelnose hotspot. “Someday, when I am a grandpa, I can go back and catch it again,” he told the Quad City Times. “It’ll be a hundred pounds by then.”