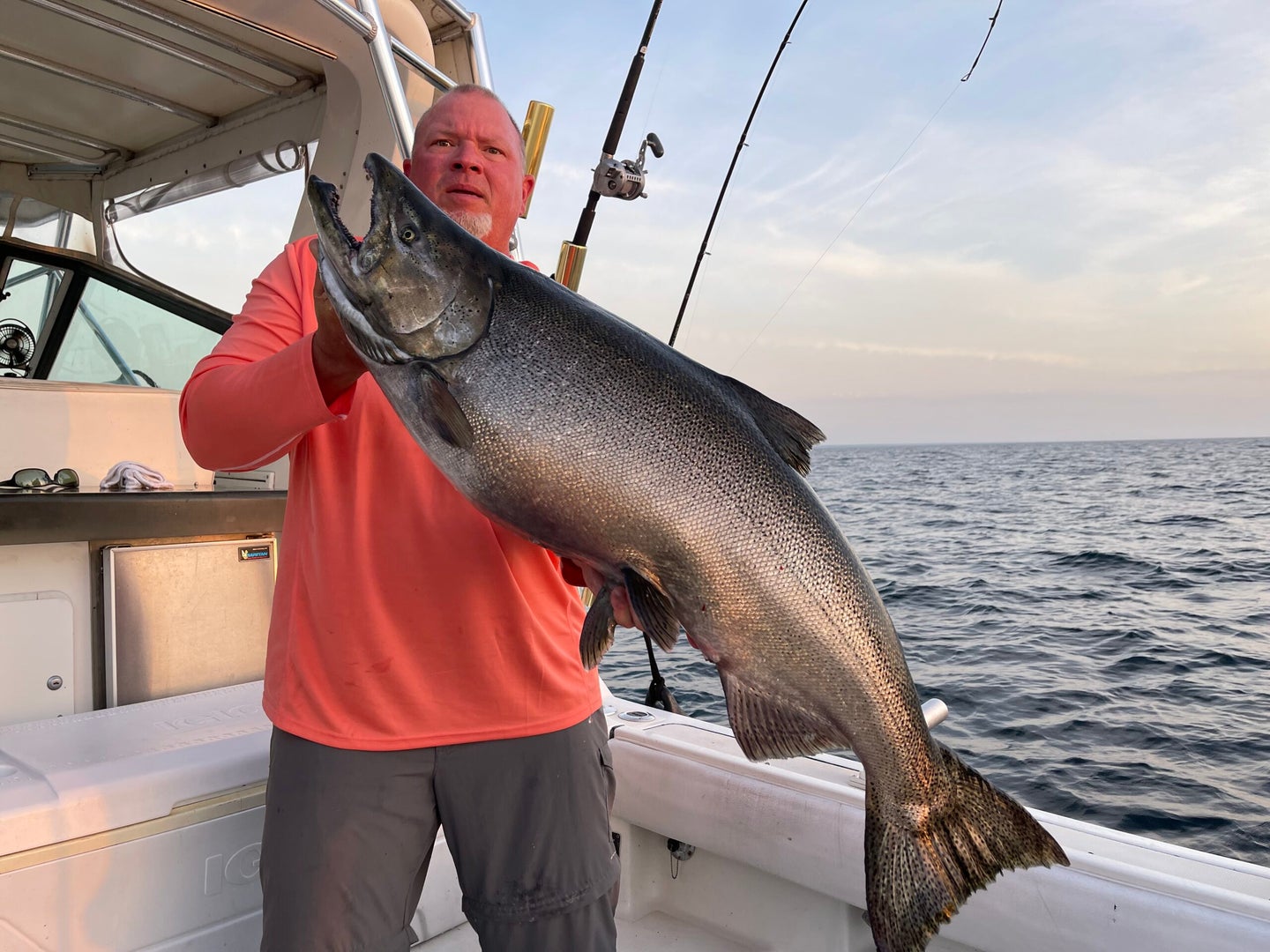 Captain Jerry Nied and first mate Bob Bachler came close to toppling a 45-year record when one of their clients boated a 34-pound chinook salmon from Lake Michigan on August 29. Nied and Bachler, with Spendthrift Chicago Fishing Charters in Waukegan, Illinois, have seen their share of big fish on the lake—but none quite like this one.

“I have logged 148,000 salmon and trout throughout my 40-year career, and this is by far the biggest I have seen,” Nied told F&S. The fish took a Dreamweaver Super Slim Spoon on 100 yards of lead-core line in 77 feet of water just off of Waukegan Harbor. Nied coached his client as he fought the fish. The hog took about 20 minutes to bring to the boat.

Nied’s scale only went up to 30 pounds, so he put out a call for a bigger model. Captain Brad Reineking, who boated an even bigger Chinook last year, “came out of North Point and brought us a 50-pound scale on the water because we thought we might have had a new state record in the box,” Bachler told the Chicago Sun-Times.  “Unfortunately, we did not, but it is one heck of a fish in any event for Illinois waters.”

The scale read 34 pounds. The Illinois state record for Chinook is 37 pounds, which was set in 1976 near Waukegan. Chinook salmon, also known as king salmon, are native to the Pacific Ocean but were first introduced to the Great Lakes in the 1870s. Stocking began in earnest in Michigan in the late 1960s as a way to control the population of alewives, another non-native fish that had become a major nuisance. Today, in some places in the Great Lakes, wild Chinooks outnumber hatchery fish. Other beloved non-native salmonids in the region include coho salmon, steelhead, and brown trout. Meanwhile, programs to re-establish native landlocked Atlantic salmon have struggled.

Read Next: Your Guide to Catching Monster Salmon on the Great Lakes in Early Fall

The biggest Great Lakes Chinooks are typically caught from boats, but land-based anglers also get a shot at them during the fall spawning season in tributary rivers. The International Game Fish Association all-tackle record Chinook weighed 97 pounds, 4 ounces, and was caught in the Kenai River in Alaska by Les Anderson in 1995.