A Blue Catfish Ate a Wood Duck Whole, According to Maryland Researchers 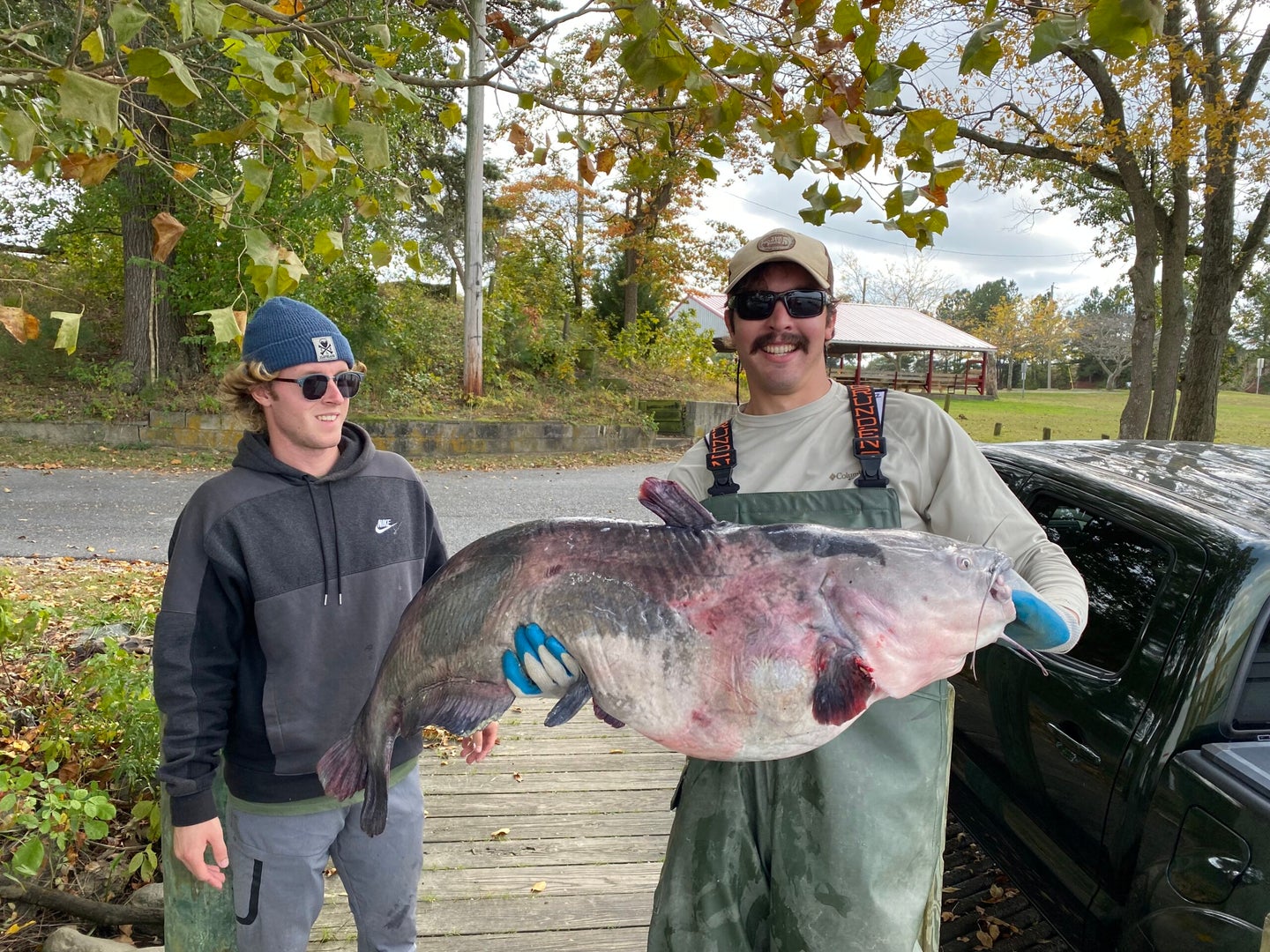 According to researcher Zach Crum (right), this blue catfish was slightly larger than the one found with a wood duck in its stomach. Zach Crum
SHARE

Researchers were analyzing the stomach contents of blue catfish in the Chesapeake Bay when they came upon a startling find: One of the catfish had eaten a whole wood duck. Catfish have developed a reputation for chomping down on all kinds of forage and baits, including chicken liver and pieces of hotdog soaked in Kool-Aid. But until now, researchers had never recorded a catfish with the remains of a whole wood duck in its stomach. The finding took place during a Salisbury University research project in assistant professor of physiology Noah Bressman’s lab on the dietary habits of blue catfish.

“I knew blue cats would eat anything they could get their mouths around, but the full-size wood duck definitely caught us off guard, especially because it was in one of the first catfish we cut open for this project,” Bressman tells F&S. “It makes me wonder what else we will find since we are just getting started.”

Graduate student Zach Crum is leading the project in Bressman’s lab. He’s been working with Maryland Department of Natural Resources (MDNR) biologists to collect blue catfish from the Chesapeake Bay through electrofishing efforts. Crum says that the catfish that had eaten the wood duck was a rather large specimen—about 47 pounds. “To the best of my knowledge, this is the first identified species of duck that has been found in the stomach of a blue catfish,” he says, noting that he thinks the wood duck was likely killed by the catfish. “We can’t know with certainty whether or not it was scavenged, but aside from digestion, the duck appeared to be completely intact with no evidence of noticeable decomposition.”

Blue catfish are a popular game fish in the southern United States, but it’s important to note that they’re a non-native species—and considered to be invasive in the Chesapeake Bay. According to the MDNR, members of the species are now commonly found in the tidal Potomac River, as well as some of the other tributaries of the Chesapeake Bay. Blue catfish can grow up to 100 pounds, and the current state record blue cat in Maryland was 84 pounds. Bressman and Crum’s project is one of several ongoing studies to determine the effect of blue catfish on local ecosystems.

“Our main objectives are to identify the potential impact that blue catfish may be having on native species of conservation concern within the Nanticoke River and compare our results to diet studies that have been conducted in different areas,” says Crum. ” Previous blue catfish diet studies on the Western Shore of the Chesapeake Bay have documented them eating muskrats, turtles, snakes, threatened shad, and herring. We are eager to see what turns up in the stomachs we look at over the next year.”

Read Next: U.S. Army Corps of Engineers Promises $226 Million To Block Carp From the Great Lakes

Though this is likely the first time a blue catfish has been reported eating an adult duck, it’s not the first time a catfish has been observed preying on birds. Wels catfish in France are known to actually beach themselves onto shore to catch and eat pigeons. National Oceanic and Atmospheric Administration (NOAA) officials are working to raise awareness of the potential harm that blue catfish can inflict on native species. The organization is encouraging recreational anglers in the Chesapeake Bay to creel and eat blue catfish that are smaller than 30 inches in order to mitigate the species’ impact on the waterway.