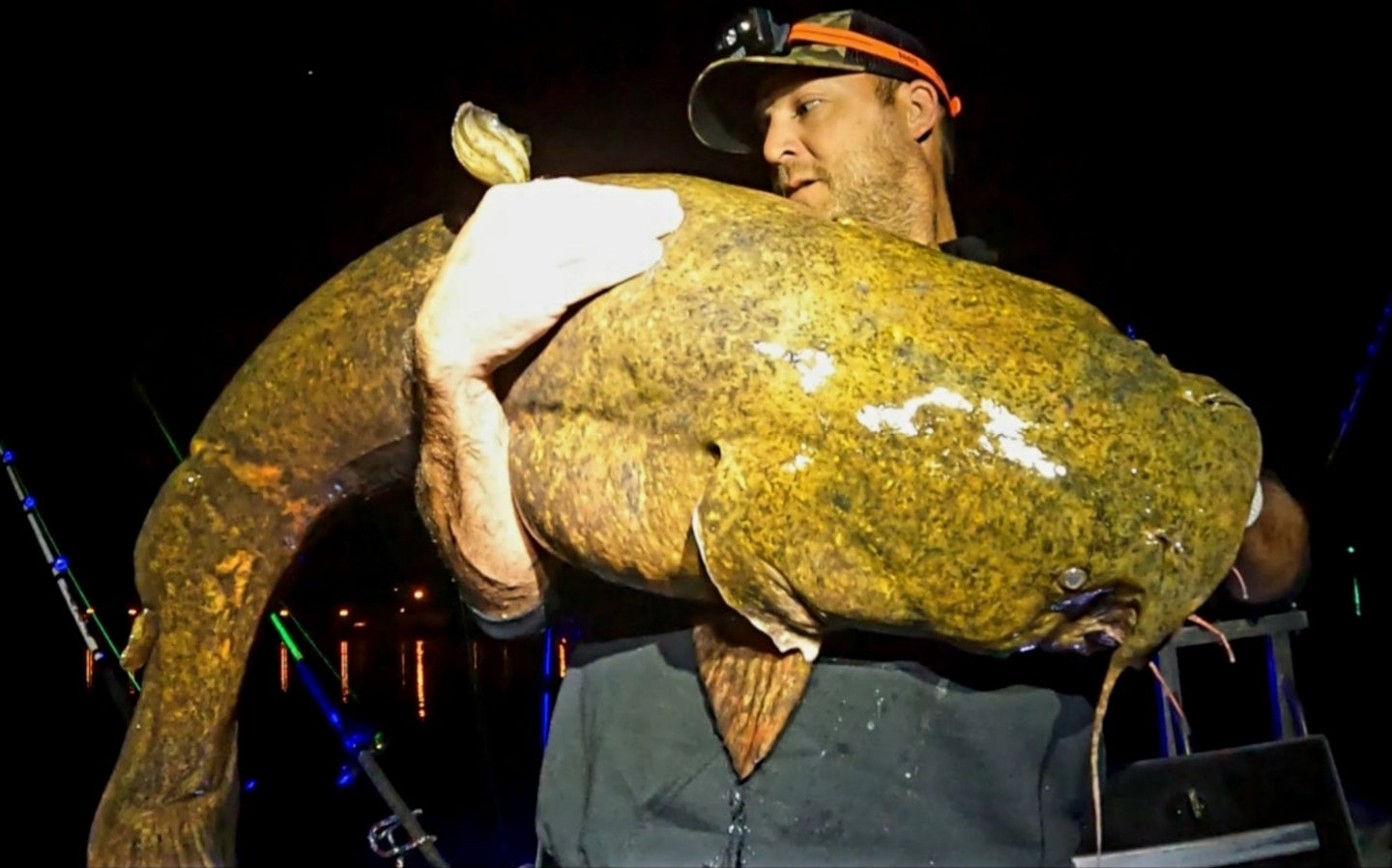 This flathead catfish tipped the scales at 64-pounds and 8-ounces. Joe Granata
SHARE

The massive flathead Joe Granata caught on the Ohio River on September 24 would have shattered the Pennsylvania state record by more than 8 pounds had it been hauled in a couple of miles upstream. But the 64-pound, 8-ounce “river monster” was hooked just inside West Virginia. Still, the brute marked an important milestone: It was a new personal best for the hardcore angler and tournament competitor who spends countless hours on the water each year in pursuit of big catfish.

Granata, who is known for his YouTube channel Hammer-Down Catfishing, was scanning a section of the Ohio River in West Virginia, about a mile beyond the Pennsylvania state line, when he identified a huge log jam near the middle of the channel. His fish-finder showed lots of baitfish staged on the cover, and he picked out some bigger marks on the perimeter that he suspected were mudcats. He moved his boat about 80 yards upstream and set out several rods baited with a mixture of gizzard shad and cut mooneye. After boating a couple of 20-pounders, he and his friends endured a short lull before one of his Big Cat Fever medium-heavy rods “just folded over.” A big flathead had taken the mooneye.

“He made one real crazy run as soon as he was hooked,” Granata says. “Flatheads are notorious for running right back into structure, so I keep the drag very tight on my rods when they’re in the rod holders. That way I can turn the fish right away, so they don’t get back in a snag and break the line. But he was taking line like it was free-spooled, and I knew right there that wow, it was a powerful fish.”

After a couple of minutes, Granata was able to turn the big cat and gain line. “After the initial fight, a flathead will swim along the bottom of the river right toward the boat,” he explains. “The majority of the fight is right at the boat. Once you start pulling them up off the bottom, that’s when they freak out. There’s really nothing you can do but hold on tight.”

After a Good Fight, Granata Managed to Boat the Monster

Granata’s fish was well short of the longstanding West Virginia state record, which is a 70-pound flathead that was caught in 1956 by L. L. McClung on the Little Kanawha River. Meanwhile, Pennsylvania’s state record flathead is only a 56-pound, 3-ounce fish that was caught in 2020 on the Schuylkill River near the Philadelphia neighborhood of East Falls. Flatheads in the eastern half of Pennsylvania, where the new state record was caught, grow fast, while those in the western half take decades to reach trophy size, according to Granata, who often fishes with biologists that study the species in the area.

“How long it takes the flatheads in our part of the state to get to trophy-class size—which is typically 30 years or longer—is kind of amazing,” he says. “They’ve aged flatheads in our area that are 52 years old, but I can tell you from being out all the time fishing, there are not that many trophy-size fish out there. And that makes it all the more important to release these big fish back to the river.” Granata would also like to see better regulations to protect the species. Current Pennsylvania regulations allow anglers to catch 50 mudcats per day with no minimum size limit and no closed season. It wouldn’t be difficult to seriously damage the population with regs like that, he says, “and then we’d have to wait 30 or 40 years to get our fishery back.”

Granata released his trophy catch. He hopes to one day boat a Pennsylvania state record while fishing the Three Rivers system in the western part of the state. “There’d be some pride in that, and it would be a great goal to set,” he says.”I think it’s every angler’s goal, in the back of their mind, to hold a state record someday. But I’m out there trying to break my own record every day, always trying to catch a bigger fish than I caught yesterday.”

And Granata says that’s never going to change, state record or not. “I work hard to get better at locating these big fish consistently, so it was an indescribable feeling to see it pay off,” he says of the 64-pounder. “But the funny thing is, right after we released that fish, I was like, ‘all right, time to go; Let’s find the 70-pounder.’ That’ll never end. It’s the lure of catching a giant. These fish are tremendous, and it blows your mind how big and powerful they are. There’s just something about tangling with the monster in the river.”