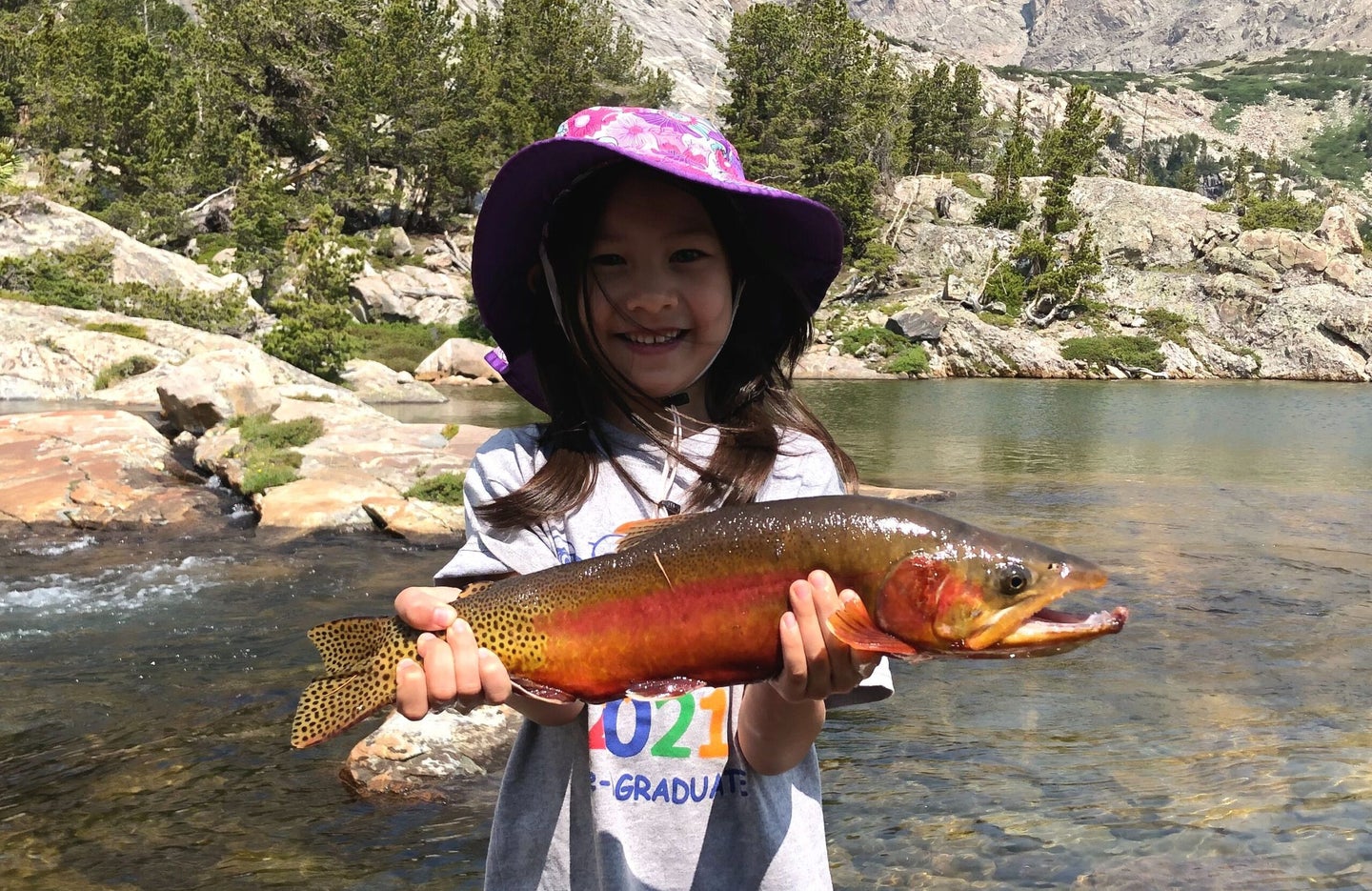 If you happen to meet 5-year-old Caroline May Evans, she may want to tell you about the fish she caught. It’s a story worth hearing: She and her mom and dad hiked 12 miles into the remote Wind River Mountains of Wyoming, where she swung a red worm over the outlet of a lake with no name and caught what turns out to be a world-record golden trout.

Caroline’s fish, landed on July 8, a few days before her 5th birthday, weighed 2 pounds, a remarkable size for a golden and good enough for the record in the International Game Fish Association’s (IGFA) 10-and-under Smallfry division. It was her third golden of the day. “She kept very calm until the fish was in the net, I guess observing how her mom and I do it,” says her father, Joseph Putnam Evans, “and then she started jumping for joy.”

The family quickly measured the trout, then Caroline laid down alongside the outlet and revived the fish until it darted away. “We knew she had a record,” Evans says. “We’re not really record chasers, but when we catch a huge one like that, we knew we had to document it.”

Why did the family happen to have a certified scale? Because on a trip last year, Evans says he “knew my wife was going to catch some records,” and he was right. Huan Zhou, an economist who grew up in a non-outdoorsy home in China, set three line-class IGFA records in July 2020 for golden, bull, and cutthroat trout. Evans has also set a record in Idaho with a 19.7-inch golden trout caught in Pass Lake in the Lost River range.

Evans and Zhou met while he was an exchange student at Peking University. The family lives today in Arlington, Virginia. Evans, a North Carolina native, has been crazy about fishing since age 3, but notes that “Caroline has me beat by six months,” since she caught her first trout on a cane pole in West Virginia at 2 and a half.

Golden trout are rare and don’t come easy. They are native to the Kern River in California but have been successfully stocked in Montana, Wyoming, and Utah. Ultra-spooky, they will scatter at the shadow of a fly line, so golden specialists tend to use spinning rods rigged with 2-pound line. “There are probably only about two dozen really serious golden trout anglers in the world, and we all know each other,” says Evans. His obsession with finding likely places to catch goldens sometimes takes up 20 hours a week and amounted to “one of the most daunting research of records of my life.”

Caroline apparently isn’t daunted by much. The hike in, to an area Evans determined to be mostly bear-free, covered 4,000 feet of elevation change. Evans carried 93 pounds of gear on his back and Zhou lugged a third of her weight. But Caroline led the way. Where she wasn’t tall enough to see the trail, her dad coached her to go left or right.

“It was a long trip, but we brought a lot of the comforts of home with us,” he says. “Caroline was never the first one to call for a rest. In fact, she was actually tugging on us to keep going.”

Don’t be surprised if you see more records from the trout-obsessed family: “We plan to go after some rare trout in China next summer,” Evans says.