Video: Strange “Creature from the Twilight Zone” Washes Up on SoCal Beach 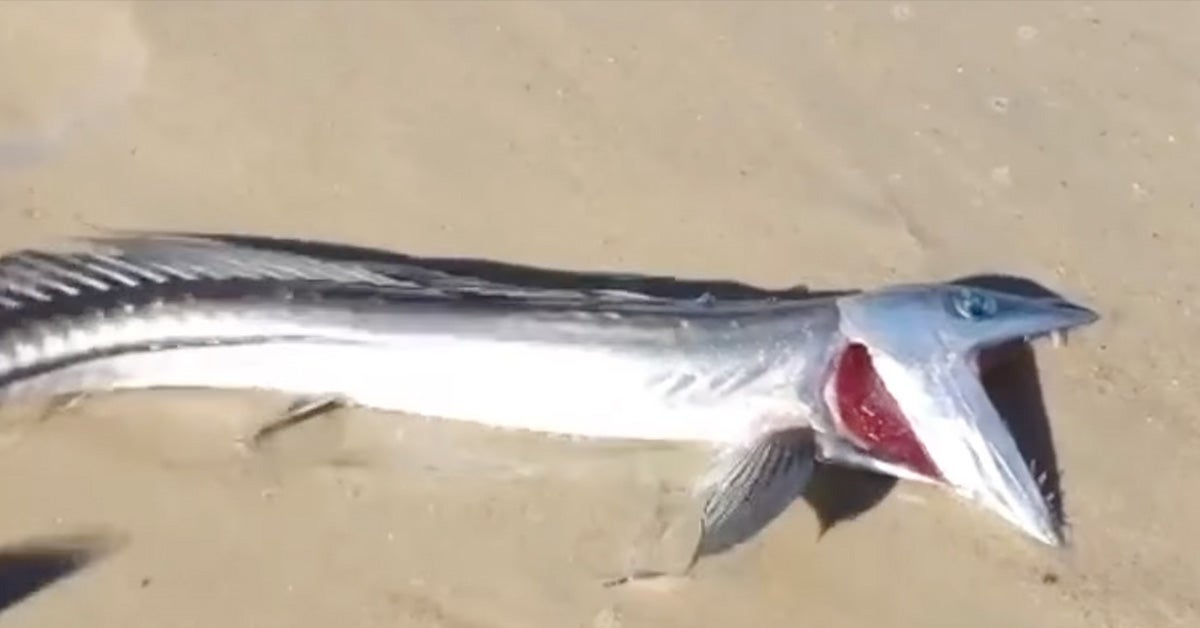 Here’s something you don’t see every day. A fish that typically lives so deep in the ocean that scientists know relatively little about it washed up on a beach—still alive. The fish was a longnose lancetfish, which are known to inhabit depths of up to 6,000 feet below the surface. Davey’s Locker Sportfishing & Whale Watching, based out of Newport Beach, California, recorded the rare encounter and posted it on their Facebook page. The video shows the strange-looking fish flopping around on the sand and opening and closing its distinctive, toothy mouth. The company says that the fish was discovered on Laguna Beach on Monday, November 15.

“[It’s a] creature from the twilight zone!” writes Davey’s Locker in the video description, referring to the cold, dark depths that the fish typically inhabits. “With gaping fanged jaws, enormous eyes, a sailfin, and a long, slithery body, lancetfish look like they swam right out of prehistoric times. Though the fish itself is not rare, since Longnose lancetfish inhabit all of the planet’s oceans, it is extremely rare to see one of these fish alive along a beach in southern California.”

Lancetfish can reach lengths of over seven feet long, according to the NOAA. They are commonly caught as bycatch by longline commercial fishermen. Lancetfish occupy a wide variety of depts ranging from 330 feet and deeper. Longnose lancetfish are sometimes called “cannibal fish,” because they’re often found with lancetfish flesh in their stomachs. Lancetfish are otherwise known to be relatively unselective predators, making a meal out of whatever they cross paths with.

“Many descriptions of new species of fish, squids, and octopus have been based on specimens collected from lancetfish stomachs, since the food within their stomachs is often found in a nearly pristine state, barely digested,” explains Davey’s Locker. “Scientists with NOAA Fisheries Pacific Islands speculate that lancetfish may eat as much as they can whenever they find food, then digest it later when they need it. Their stomachs provide a window into the rarely studied twilight zone in the ocean, where these fish mainly hunt.”

The charter boat company adds that it’s not known why a typically deep-sea dwelling fish was found on a SoCal beach, though they speculate that it might have some relation to a mysterious “sonic boom” that residents observed that morning. After the video was recorded, the fish was pulled into the ocean and according to the Facebook post, “swam away, seemingly unharmed.”