Northerns are gathering in the shallows to spawn right now. There's no better time to catch a hard-water giant 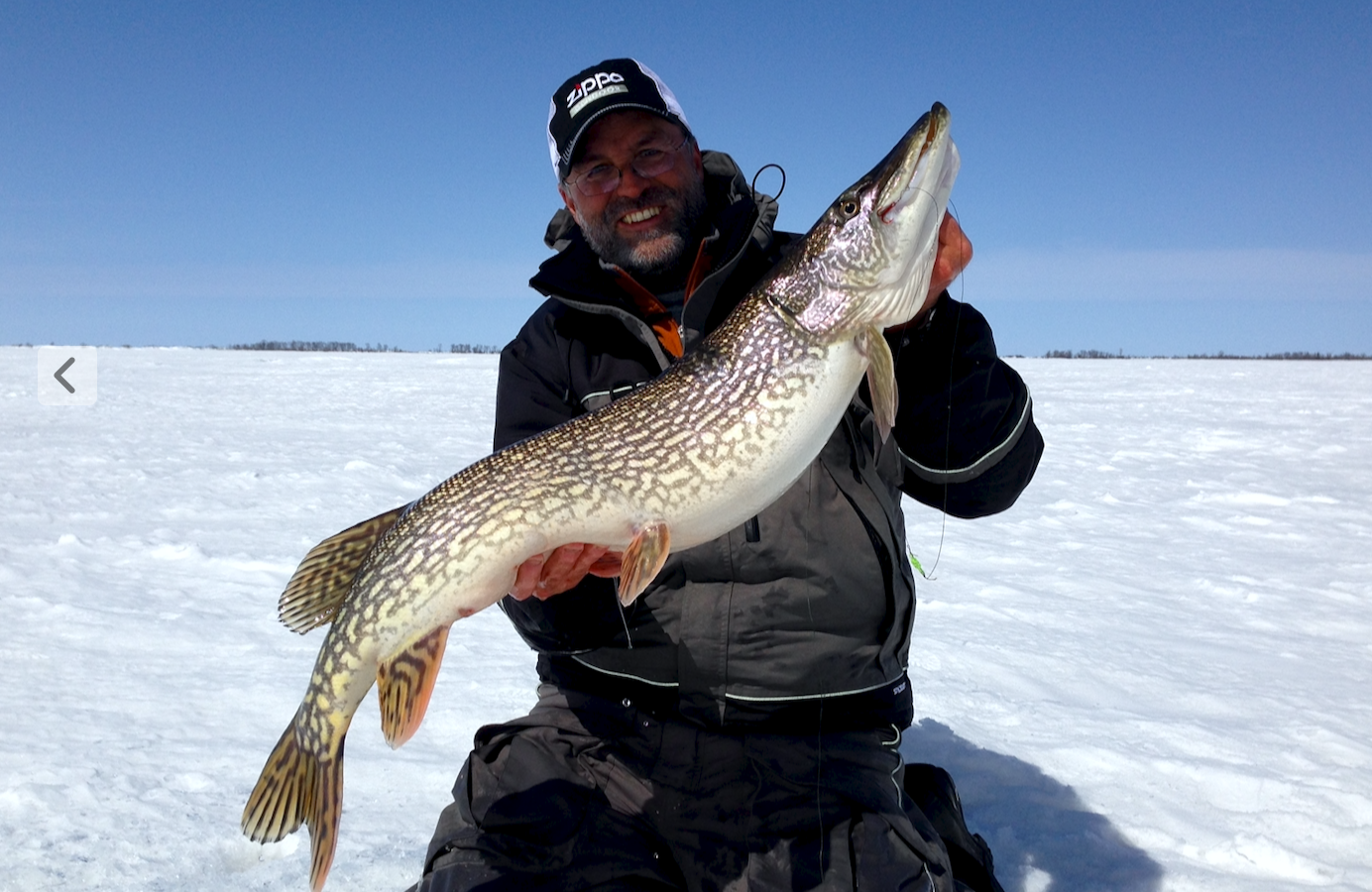 The author with a late-season Minnesota northern. Steve Pennaz
SHARE

My buddy Mitch just called me. “A big pike is eyeing my sucker,” he says, watching the action on the AquaVu underwater camera we have rigged in our ice shack. “Oh man, he just smoked it…Gotta go!” A few minutes later, I receive a text: “34 inches and thick” along with a photo. This is why the late-season is the best time to target monster pike.

Living through a harsh, north-country winter is the only way to truly understand the impact of those first spring-like days in February and March. Recently, temps here in Minnesota topped out in the upper 40s, and it was enough to convince a dude who lives just up the road from our cabin to break out his swimsuit and a lawn chair and spend an hour sunning atop a foot of melting snow. He isn’t the only creature responding to the warming weather, either. Pike across the ice belt are abandoning their deep, mid-lake winter haunts and moving toward shallow spawning areas—and that’s exactly where you want to target them through the ice. Here’s a quick game plan.

1) Learn Where to Look For Late-Winter Pike

The key right now is locating the prime stopping points for moving fish. Some of the best include deeper weed edges outside shallow spawning bays. Rocky points and sunken islands will also hold pike, this time of year. A good lake map will help you locate these areas, but your challenge is setting up where the pike are actually going to be. Remember, depth is relative. In clear lakes, 35 feet is not too deep to hold late-season pike, though I usually fish shallower. Pike in turbid lakes, where weed growth may end at just 6 or 7 feet, can be found as shallow as 2-3 feet.

2) Use The Best Tackle For Northern Pike

I broke off the first big pike I hooked through the ice, but learned a valuable lesson in the process—match the tackle to the fish. I run tip-ups almost exclusively this time of year, each with a quick-strike rig. For a main line, I like heavier braids like 50-pound Berkley X5 as it’s strong and easy to grip, even with cold hands. For leaders, I go with near-invisible fluorocarbon like clear Berkley Vanish in 40-pound test. Fluoro is much more abrasion-resistant than mono, and seems to generate more strikes than wire leaders. For hooks, I like smaller trebles, like heavy-wire No. 4s. They do a great job hooking and holding pike, with less danger of grabbing ice when you finally get the fish to the hole.

Years back, while chasing shallow-water pike on Lake of the Woods for a Stone Cold Fishing TV segment, we noticed something peculiar. Most of our bites were coming on round “thermal” tip-ups versus the rail-style tip-ups. At first, I thought it was a location thing or a difference in baits. Then, we lowered an underwater camera to capture video as we landed a big pike, and it became immediately apparent what the issue was: light was coming through the holes with the thin, rail-style tip-ups. In contrast, those with the hole-covering thermal tip-up had virtually zero light coming through the hole. We fixed the problem using a piece of cardboard to block light on holes with rail tip-ups and bite numbers increased.

4) Use the Right Bait for Late-Winter Pike

It’s taken me years to embrace the fact that pike are scavengers as well as predators. It likely goes back to the many years I’ve chased smaller pike, which are far more aggressive than large pike. Now, I give the fish a choice, rigging live baits (typically large sucker minnows) on one tip-up and a dead bait (typically a frozen ciscoe) on the other, and let the fish tell me what they want. When fishing live bait, I use heavier weight positioned near the bait to limit movement and make it easier for a pike to get the bait.

Read Next: Spear and Trembling: The Ancient Art of Stabbing Pike Through the Ice

When fishing for late-winter pike, position your baits throughout the water column to determine if the fish respond best to a particular position. At times, pike like to ride the bottom of the ice to pick off dead fish that float up. A pike’s eyes are positioned near the top of its head, making it easier to look up, so use that to your advantage. Also, stay cool when you finally hook that monster. I’ve seen too many anglers get excited about a big fish and lose it simply because they were too tense to fight it carefully.