Tim Trahan of Arcadia, Louisiana, caught the 2.24-pound bream from his neighbor's pond. It beat the old record by more than half a pound 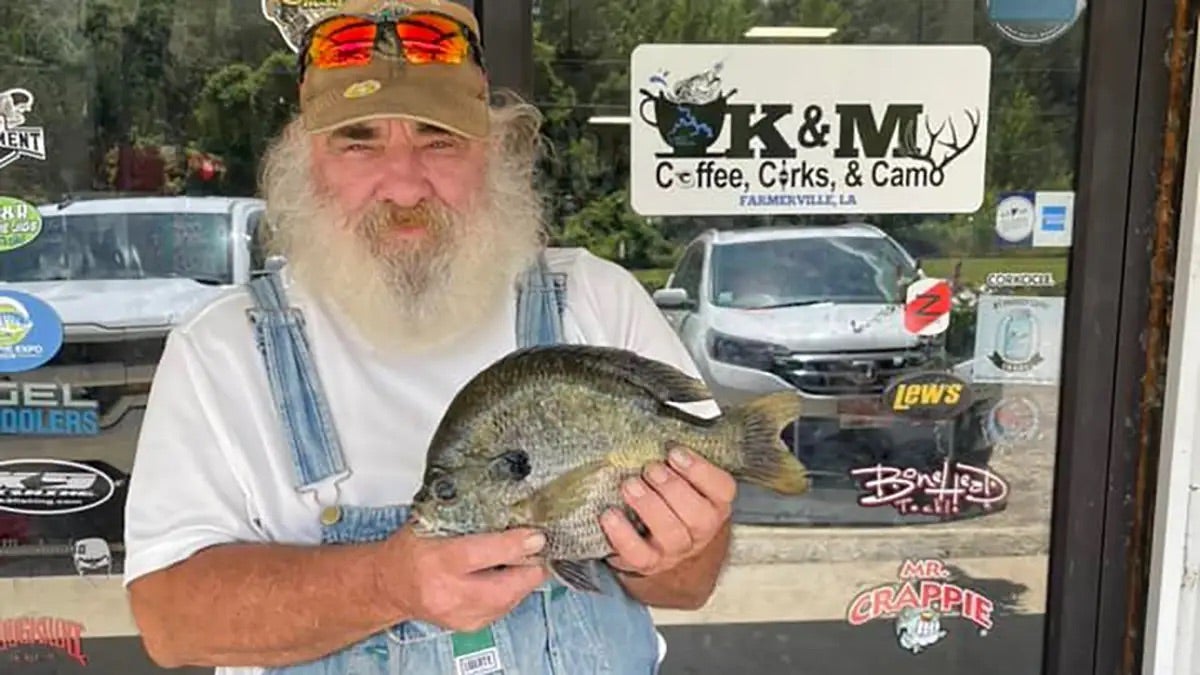 Tim Trahan, 65, of Arcadia, Louisiana, didn’t have to travel far to catch a state-record bluegill. He hooked into the 2.24-pounder while fishing in his neighbor’s pond. “Actually, I was amazed by the size of it,” he told the Houma Courier. “I thought I was…fishing for sheepshead.”

Bluegill sunfish typically tip the scales at a half-pound, give or take a few ounces, and reach about seven inches. Rarely do they surpass a pound or a foot. But Trahan’s catch was noticeably different. So much so that the first person who weighed it questioned its bluegill credentials.

Trahan brought his catch to the nearby K&M Coffee, Corks, and Camo sporting goods store in Farmerville. Employees at the store declared it a record before it was even weighed. But the store’s owner, Marcy Kavanaugh, hesitated. “It was huge, the only question was if it was a true bluegill or if it was a hybrid,” she said.

After the initial measurements and conjecture, the Louisiana Department of Wildlife and Fisheries and the state Outdoor Writers Association made it official: It was a non-hybrid bluegill and a state record. While Trahan’s bluegill wasn’t eligible for the public-waters division of the Louisiana state-record book because it was caught in a private pond, it still topped the state’s largest-recorded, private-pond bluegill by more than a half pound.

Read Next: 6 Cheap Bass-Boat Upgrades For Anglers on a Budget

Bluegills are native to the eastern United States but have been introduced to waters across the continent. When young, they feed on zooplankton but then graduate to worms and insects. Larger bluegills will eat crayfish and minnows, while smaller individuals make good bait themselves for other gamefish (where legal). They earn their name from the navy blue flap that covers their gills, which extends to their large pectoral fins.

The previous record Louisiana private-pond bluegill was caught in a subdivision pond by Dwaine Payne. It weighed in at 1.72 pounds. When Trahan learned he’d topped that, he told Houma Today: “Wonderful, it’s all good. I’m not any different from what I was the day before. It just makes me feel good to accomplish something like that.”