In April, angler Brett Plummber boated a 31.6-pounder—one of the biggest ever caught in Louisiana 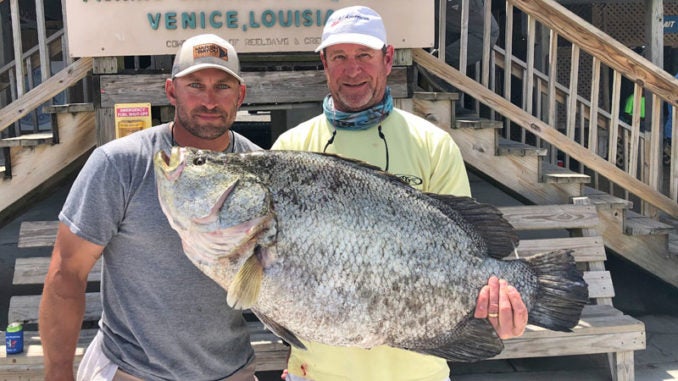 Venice, known as the “Gateway to the Gulf,” is the southernmost town in Louisiana. It is where the road and the river end, where the Mississippi Delta fans out like the branches of a tree into the Gulf of Mexico. Billed locally as a sportsman’s paradise, anglers from around the world arrive there every spring to fish the teaming waters. For Brett Plummer of North Carolina, who chartered an expedition with Captain Rich McCloskey’s Blue Line Charter Service in late April, the trip of a lifetime ended with a tripletail that made the record books.

The waters around Venice, enriched by the silt run-off of the Mississippi River, are one of the country’s top wild shrimp fisheries. In the spring, female white shrimp deposit millions eggs into the bay. So, shrimp season is closed to ensure bountiful harvests in the fall. But the spawning attracts hordes of other fish, making “the end of the road” in Venice a prime destination for yellowfin, wahoo, swordfish, marlin, mahi mahi, amberjack, snapper, shark, tarpon, redfish, grouper, and many other species—including tripletail.

Plummer and the others on his charter instructed McCloskey to target bull redfish. McCloskey maneuvered his way through the maze of inlets and, in a short time, the anglers were bailing bull after bull. Finally, exhausted, the clients asked McClosky to shift to tripletail. He brought them to a string of wellheads in 15 to 25 feet of water at the mouth of the Mississippi, and the fishing flipped. Cast after cast produced nothing. So, McCloskey made what he called a “half-time adjustment.”

At a new location, not quite as deep, McCloskey rigged up Plummer, who was using a Daiwa BGMQ 500 spinning reel, with a live shrimp threaded onto a ½-ounce jighead beneath a 5-foot, 60-pound-test fluorocarbon leader and a Four Horseman popping cork. Plummer cast to the far end of the wellhead and retrieved. Twenty feet from the boat, his cork dove, his drag screamed, and the fight was on.

McCloskey told the Louisian Sportsman, “We all knew it was a monster, and we were on the edge of our seats.”

Three times Plummer got the fish boatside, only for it to take off on another run. Finally, on the fourth attempt, the team netted the beast, which weighed 31.6 pounds—making it the eighth largest tripletail ever landed in Louisiana.

Plummer’s fish weighed in at 31.6 pounds.