The unusual finds were pulled from the Union Canal in Edinburgh, Scotland 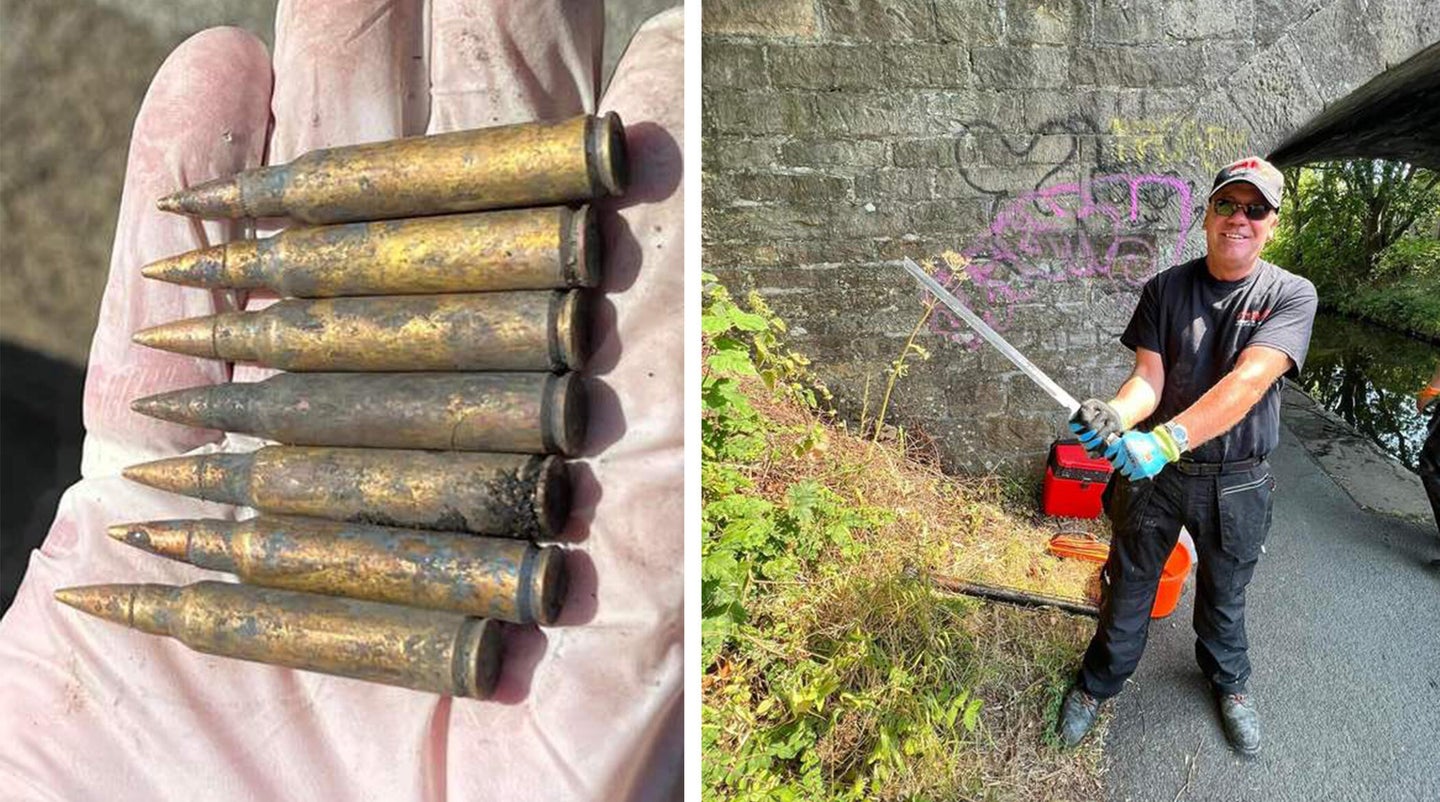 The three-foot samurai sword was pulled in by Eddie Wells on his first cast of the day. James Pearson
SHARE

A group of magnet fishers hauled in a “razor sharp” samurai sword and seven rifle bullets while plying the waters of the Union Canal in the Scottish capital of Edinburgh last weekend. The interesting finds, which were posted to the Magnet Fishers of Edinburgh Facebook page and published in the Edinburgh Evening News, were quickly turned over to local authorities. But not before magnet fisherman Eddie Wells posed with the Japanese sword for a photo, and another man snapped pictures of the seven large caliber bullets he’d resurrected from the waters of the canal.

The sword measured three feet in length and was caught by Wells on his first cast of the day. Fellow magnet fishing enthusiast James Pearson posted the sword and the bullets to Facebook, saying that the finds came during “a fantastic few hours at Bullet Bridge…in the white-hot heat of Edinburgh.”

Magnet fishing involves throwing high-powered magnets affixed to strong rope into creeks, canals, or rivers, and slowly dredging them back to shore. When a magnet fisher is successful, the magnets come back attached to metal objects like old chairs, motorcycle frames, discarded ammunition, guns, or swords.

Magnet fishing has recently gained popularity in both Europe and the United States—but the legality of the activity has been called into question in some areas. Earlier this week, three men magnet fishing in Georgia made news when they posted a video featuring a slew of 50 caliber bullets and more than 80 training rockets they’d dredged from the bottom of a river on a military base. The video included several minutes of commentary about the heavy-duty ammo and rockets they’d found—and even showed a run-in with law enforcement that led to fines and charges.

In Europe, safety concerns have prompted strict regulations around magnet fishing. Authorities fear that dredged-up explosive devices—common finds in areas where World War II-era battles were fought—could ultimately detonate, endangering the magnet fishers themselves as well as bystanders. Other concerns arose when magnet fishers in Berlin began leaving their discarded finds on municipal streets and walkways. Earlier this month, a man magnet fishing in an Amsterdam canal pulled a dead body from the water. That prompted a closure of the area and a police investigation.

In the U.S., Indiana has recognized the popularity of magnet fishing and is now requiring permits and special licensing. The Indiana Department of Natural Resources (DNR) says that magnet fishing on waterways owned by the DNR can only be done with a DNR-issued permit and that any magnet used must be “small enough to be carried and retrieved by hand.”

In Scotland, local authorities decided to officially legalize magnet fishing in canals managed by the Scottish government in 2021. Despite the recent legalization, Scottish magnet fishing is still tightly regulated, and finds like the samurai sword and bullets recently retrieved from Union Canal must be immediately surrendered to the authorities.