The electronic billboard ad ran for five days on highway 371 in Brainerd, MN 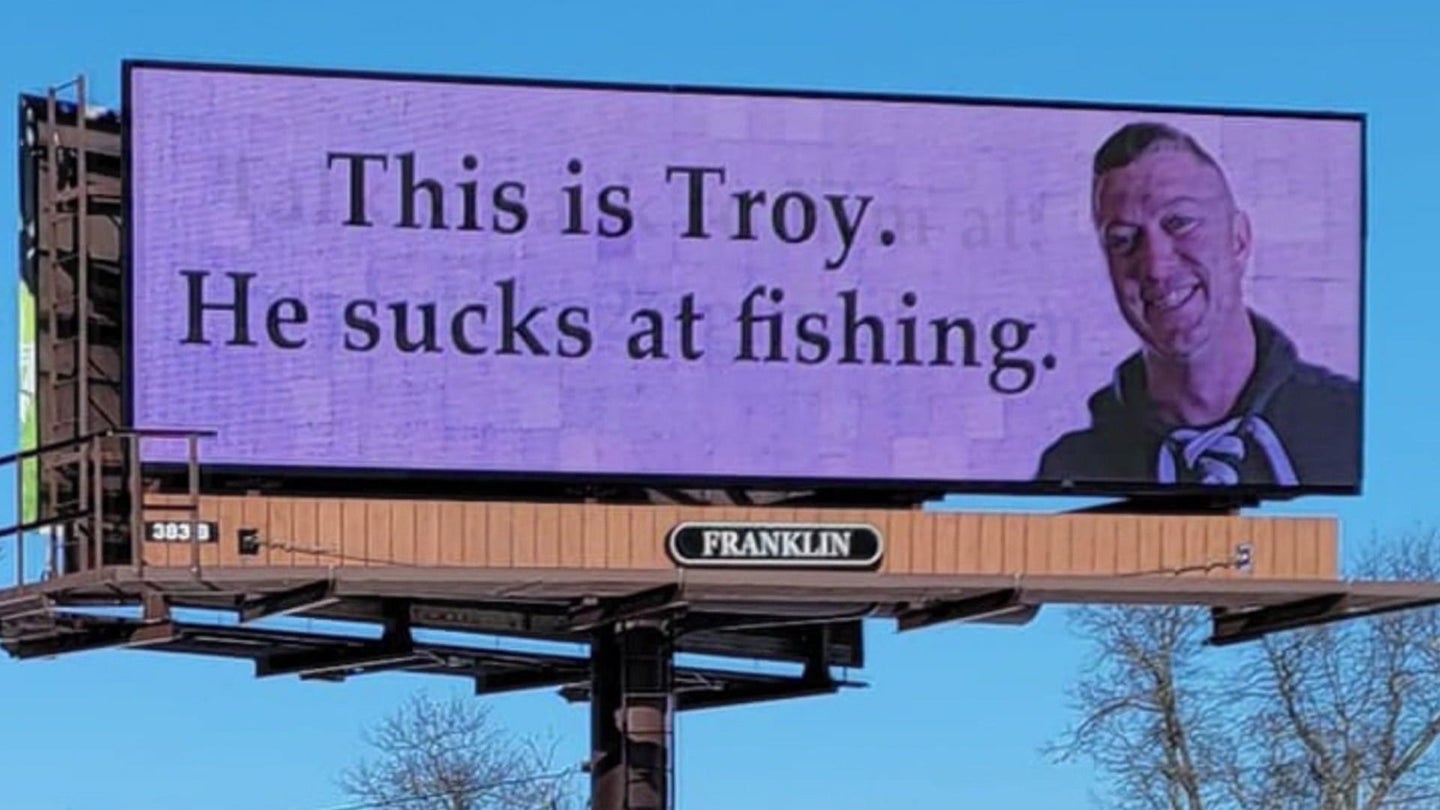 If you fish regularly with your buddies, you know that that belittling, demeaning, and insulting your friends is, by law, as close as you are permitted to express appreciation for another man. According to sociologists, a man telling a buddy that he couldn’t catch a fish in an aquarium is like him telling his spouse that she’s the love of his life.

A brave man named David Vee took this to a new level recently, when he took out a $300 electronic billboard along Highway 371 in Brainerd, MN, for five days to humiliate a fishing buddy. The billboard features a smiling photo of the victim and the following headline:  “This is Troy. He sucks at fishing.” Then the billboard changes to read, “Talk smack to him at Troysucks2@gmail.com.”  Apparently, according to Vee, Troysucks and Troysucks1 were already taken.

My favorite story of the day: Troy’s fishing buddies bought this billboard near Brainerd. They put an email on it too for people to rip on him. pic.twitter.com/cSs47L2HeI

Troy is part of a four-man group that goes fishing regularly and takes one big trip a year. “He’s been less than successful in previous trips,” Vee said in a video. Some days, Troy, despite being a competent angler, catches nothing. Vee tells the story of one of the group, who, after a rough evening, spent the night on the boat and was sleeping it off the next day. At a certain point, the fellow woke up, saw that his bobber had gone down, reeled in the fish, stuck it in Troy’s face, and then went back to sleep. Troy, of course, had caught nothing all day.

Vee sums it up this way. “If there’s bad luck on the boat or in the fish house, Troy’s got it.” For his part, Troy has been a good sport about the whole thing, even posing for a photo with a big smile on his face as he points to the sign, which sits at mile marker 36 on Highway 371.

Vee says that Troy is actually a fine fisherman, “but I won’t tell him that to his face.” In the meantime, Vee says he’s going to wear a helmet on their outings next year. He fully expects Troy to reciprocate the affection at some point. For my part, I’ve already written to Troy at Troysucks2@gmail.com to say that I wish I had friends who are that thoughtful and affectionate.