Matt Neuling thought he was shooting a 30-pound grass carp. He landed a 125-pound "straight-up monster" 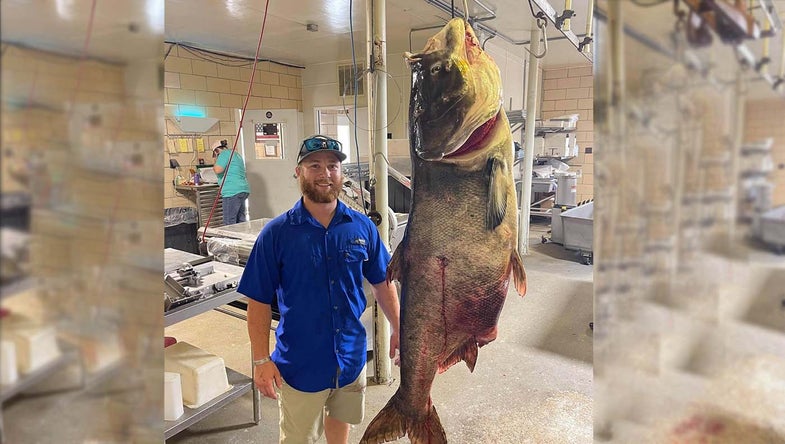 This bighead carp's head is far from the only part of it that's "big.". Missouri Department of Conservation
SHARE

Matt Neuling arrowed and landed a state- and world-record-size bighead carp on July 24th. The 125-pound, 5-ounce behemoth is the largest bighead ever taken in Missouri and has been confirmed by the Missouri Department of Conservation (MDC) as an official state record in the alternate methods category. It’s also a potential bowfishing world record; the Bowfishing Association of America‘s existing world record bighead is a 104-pounder caught by William Barr in West Virginia last year.

“I was out with my buddy early that morning when we both shot what we thought was a 30-pound grass carp,” Neuling says in a press release. “My buddy’s arrow pulled out, but mine shot straight through and stayed in there.”

Landing the carp was a tag-team effort. Realizing that Neuling was tied to a monster, his buddy was able to reel in his arrow and shoot it into the flailing bighead. It then took both of them to drag the carp onto the shore.

“We just couldn’t believe it,” says Neuling. “We knew what type of fish it was, but we had never seen one that size. This thing is a straight-up monster. A five-gallon bucket could easily fit in its mouth.”

After Neuling and his friend got the fish weighed on a certified scale, they gave the head to MDC Fisheries Program Specialist Andrew Branson, who estimates that the bighead was over 10 years old. Branson adds that “bighead carp are an invasive fish from Asia. This particular fish is an example of just how well an invasive species can thrive if given the opportunity. We encourage people to harvest these fish to help remove them from our waters.”

Invasive or not, the fish is a true giant.

“It’s just crazy,” says Neuling, who has already used parts of his record-breaking catch as catfish bait. “You know, I set that goal of breaking a record every time I go out to fish, but I never would have thought I’d be breaking a record with this fish.”