In an interview with F&S, Steve Harris, Jr. tells the story of how he arrowed the new world-record, 92-pound, 67-inch paddlefish 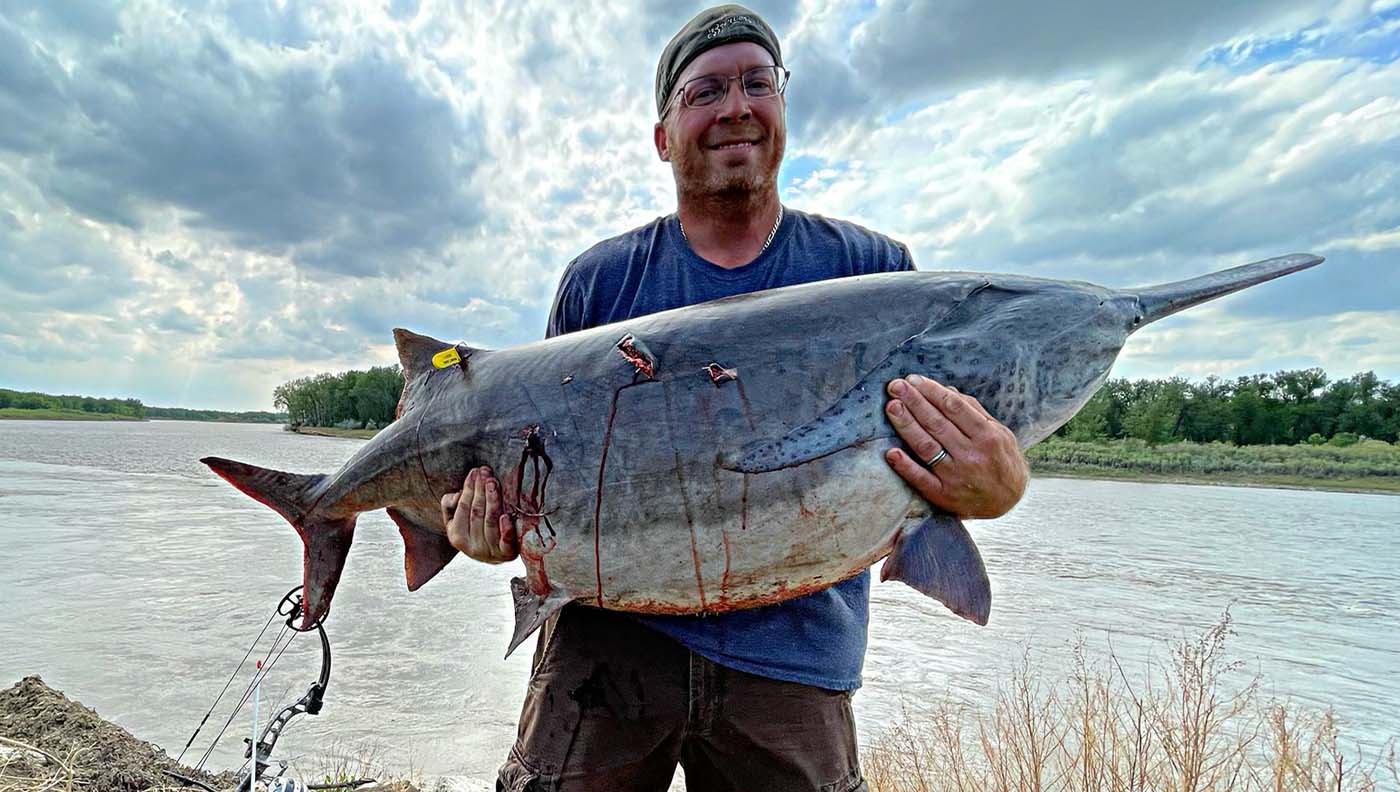 Montana bowfisherman Steve Harris, Jr. shot and reeled in a world-record paddlefish earlier this month. The whopper fish weighed 92-pounds, was 67 inches long, and had a girth of 37 inches. It easily topped the previous record, an 89-pounder caught on the Missouri River in Nebraska in 2019. Harris’s trophy catch came out of the Yellowstone River, which is typically known for its superb trout fishing but also holds a healthy population of American Paddlefish, a native species that has inhabited North American waters since the Cretaceous period 65 million years ago and is known for its distinctive horn-like paddle.

Harris, an avid outdoorsman, began targeting paddlefish with a rod and reel as a kid. “My first catch was a 13-pounder when I was 13 years old,” he recalls. He has caught at least one each year for 30 consecutive years. In some years, he caught as many as four, fishing in Montana and North Dakota, and he estimates he’s hauled in around 80 paddlefish in total, five with a bow. Though it’s typically forbidden to target game fish with bowfishing gear, paddlefish are an exception. Still, bowfishing for paddlefish in Eastern Montana is a relatively niche endeavor, and Montana Fish, Wildlife & Parks manages their harvest with a permit system.

“We first tried it in 2011, and we hadn’t heard of anybody else ever doing it around here,” says Harris, who lives in Sidney. “It’s hard, especially for someone like me who doesn’t do a lot of bowfishing. You’re only seeing little pieces of fish when you’re doing it, because the water is really muddy.”

One June 8, Harris and his bowfishing partner Justin Fisketjon hit one of their favorite spots on the Yellowstone in search of paddlefish. Fisketjon has an impressive bowfishing pedigree himself that includes an 87-pound world record paddlefish taken in 2016 from the same spot. That record stood until 2019, when Andrew Myer of Nebraska shot the 89-pound paddlefish that Harris dethroned.

“The spot we were fishing is actually a super-deep hole,” Harris says, “which nobody would ever think would be a good spot for shooting paddlefish.” That’s because bowfishermen often target shallow water where they can count on paddlefish being near the surface. “But there’s a bunch of concrete along the shoreline somebody dumped to prevent erosion,” he says. “The Yellowstone rises and falls a lot with snowmelt, and when it rises, water boils over that concrete and forces the paddlefish to the surface.” It also makes a stable platform to shoot from at the water’s edge, Harris notes.

Bowfishing for paddlefish in muddy water involves lots of staring at the surface, drawing at any hint of a swirl or boil that could mean a fish is about to rise. “You can stand there for two or three hours and not see anything, and then a fish comes up and you’ve got a second or two to get off a shot,” Harris says. On this day, the action was steadier: Harris had already gotten off four shots when he turned around to talk to Fisketjon, who was filming farther up the bank. When he turned back to the water, he saw a big fish almost at his feet.

“It came up only 4 or five 5 from shore and was swimming straight away, which is about the easiest shot you can ask for,” Harris says. “A lot of times you’re just seeing a tailfin and guessing. But he came up, and I could see most of his body, and I got a good shot on him.”

“The fish made a run out to the edge of the current,” Harris continues. “Those bowfishing reels only hold about 30 yards of line, and he took almost all of it, but I was able to gain some line on him. Once I got him back to shore, we thought it was a pretty good fish, but we didn’t know how good. The first thing I said was, ‘Oh, that looks like a 60-pounder.’”

The fish seemed to grow before the anglers’ eyes as they teamed up to drag it over a steep bank. They decided they needed to take it to a certified scale to be weighed—and it’s a good thing they did. The paddlefish, which Harris has ordered a replica of, quickly became certified as a state and world record by the Bowfishing Association of America, which has been keeping tabs on bowfishing records since 1989. Harris’s fish failed to match the Montana Fish, Wildlife and Parks state record, a 142.5-pounder caught in 1973, because the agency doesn’t distinguish between fishing styles for paddlefish records. Still, Harris’s fish is a catch to remember—and a high mark to beat for anyone in the rapidly growing sport of bowfishing.

By the time the duo drove back to town for the weigh-in, a crowd had gathered, including Harris’s wife and son. The family had been scheduled to leave for a weeklong vacation in Wisconsin that morning, but they’d put off their departure a bit so Harris could get in a few hours on the river while it was running high. Now they watched as the scale confirmed the ultimate prize: a world record.

“I work hard at whatever I do, whether it’s hunting or fishing,” Harris says. “But nobody really thinks they’re gonna get a world record in anything. To actually get a record—let alone a world record—it just blows your mind. It was awesome, especially with family there to see it.”