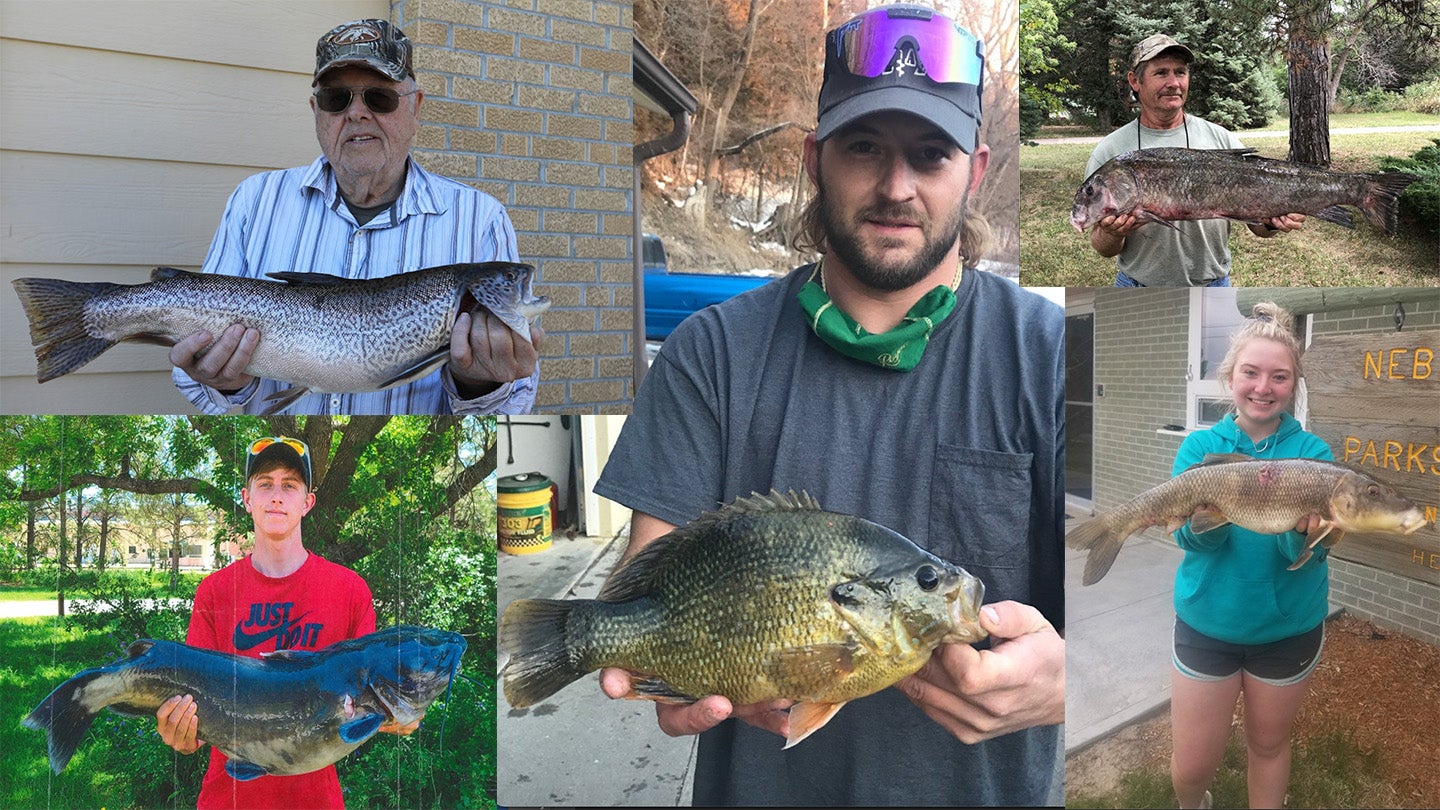 Many of us will be happy to forget 2021, but it was a year to remember for Nebraska fishermen. Throughout the course of last year’s fishing season, Cornhusker State anglers put six new state-record fish into the books, two by spear, two by bow, and two by rod and reel.

Steven Carel of DeWitt got it started just three days into the new year when he pulled a 1-pound, 14-ounce green sunfish through a hole in the ice on the Clatonia Reservoir in Gage County, setting the rod-and-reel record and breaking the previous mark by 3 ounces.

“I caught it on a wax worm,” Carel told the NCN Nebraska News Channel. “A buddy and I decided to try it [the Clatonia] because it was so close and neither of us had ever fished it.” Good idea.

By March, it was warm enough to bank fish at the Sutherland Reservoir. Walton “Ed” Moore of North Platte drifted a minnow on the bottom of the lake and hooked the largest tiger trout ever caught in the state, a 6-pound, 13-ounce, 25¾-incher that bested the previous rod-and-reel record, also caught in the Sutherland, by over a pound.

In April, Brionna Schafer of Alliance shot her way into the Nebraska Game and Parks Commission record books, arrowing a 6-pound, 6-ounce white sucker at the Box Butte Reservoir in Dawes County and breaking the previous bowfishing record for the species by half a pound.

The next two commission-certified marks fell to spearfisherman. On June 5, Anthony Borghi of Ogallala speared a 26-pound, 9-ounce channel catfish, also at the Box Butte Reservoir. Only eight days later, in the same body of water, Hunter Jordan of Hemingford bested Anthony’s catch by nearly a pound, spearing a 27-pound, 5-ounce channel cat. Prior to that 8-day stretch, the record hadn’t been broken in over 20 years.

In July, another bowfisherman—and holder of no less than three bowfishing records—set the final new mark of the year. Fishing in the Missouri River in Cedar County, Marlyn Wiebelhaus broke his own record with a 16-pound, 10-ounce black buffalo, more than doubling his old mark.

As Nebraska anglers look forward the the bulk of the 2022 season, there’s no reason they can’t continue their record-breaking ways. Anyone who really wants to make a splash could go for the state’s largemouth bass or brook trout records, both set 57 years ago in 1965. Or target the state’s largest haul ever, a 59-inch Missouri River blue catfish caught by Raynold Promes in 1970 that weighed 100 pounds, 8 ounces.

Or if that’s too much to hope for, just try to catch an alewife topping 3.5 ounces.