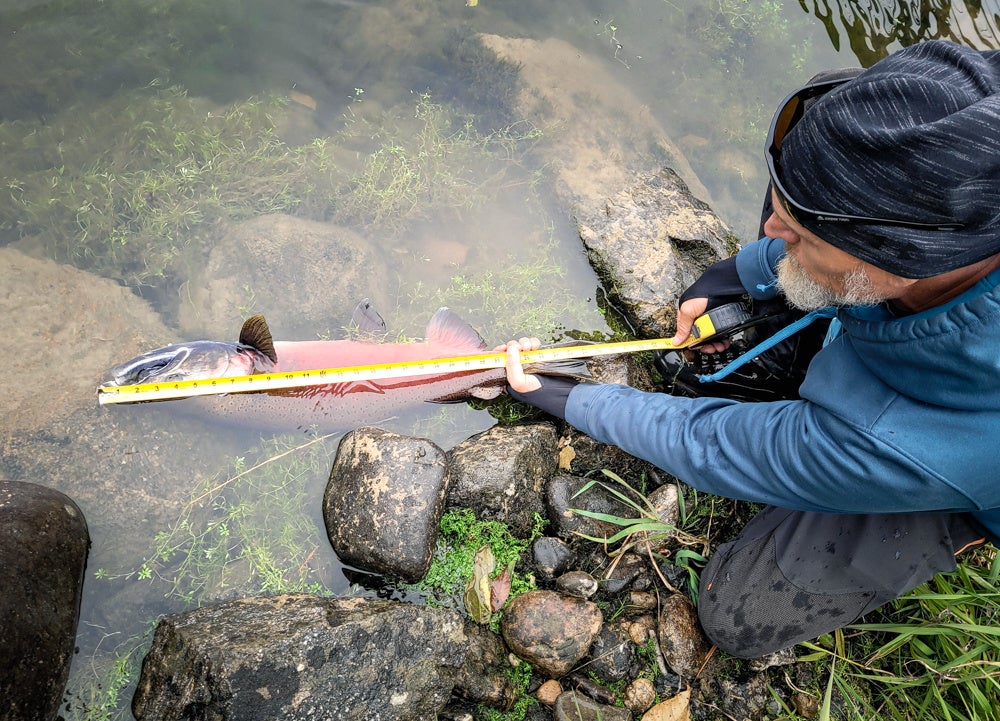 Idaho has a new state record for ocean-run coho salmon. The 30-inch fish was caught and released on the North Fork of the Clearwater River by Lewiston-based angler Jerry Smith on November 14, 2022. Smith’s impressive catch is the first record of its kind in Idaho state history.

Idaho’s catch-and-release record program has been in place since 2016, but Smith submitted the very first ocean-run coho for the relatively new category, according to the Idaho Department of Fish and Game. The general record for ocean-run coho was set back in November 2014 by Steve Micek. That fish weighed 11.75 pounds and taped out at 33 inches in length. It was also caught in the Clearwater River.

The Clearwater River of northern Idaho is home to multiple species of anadromous fish, including steelhead trout and chinook salmon. Each fall, these species migrate some 450 miles, through a gauntlet of man-made dams and a series of towering mountain ranges, to return to the pristine spawning habitat that the Clearwater provides.

Coho salmon were declared extinct in Idaho in 1985, but thanks to a successful hatchery program implemented by the Nez Perce Tribe, the iconic fish has since returned to the Clearwater River system. According to the Spokesman-Review, the first major resurgence of the fall coho run from the Pacific Ocean back into the Clearwater country occurred in 2014. That year, 18,098 fish were counted as they passed the Lower Granite Dam on the Snake River. In late October 2021, the record was broken when 18,690 adult coho passed through the dam on their way into Idaho.

While impressive, these recent numbers pale in comparison to the estimated annual return of more than 200,000 coho that used to occur before dams were constructed along the Lower Snake River in the 1970s. Some conservationists and fisheries biologists say that the threatened sea-faring fish could be significantly bolstered with the removal of four massive dams along the Lower Snake River. And last summer, the National Atmospheric and Oceanic Administration (NOAA) filed a lengthy report that supported their claims and recommended the removal of said dams.

Smith’s fish was officially entered into the Idaho record books on Monday, December 5. The IDFG says that anglers chasing fall-run fish should thoroughly understand the differences between coho salmon, chinook salmon, and steelhead, as separate seasons and bag limits are in place for each species.