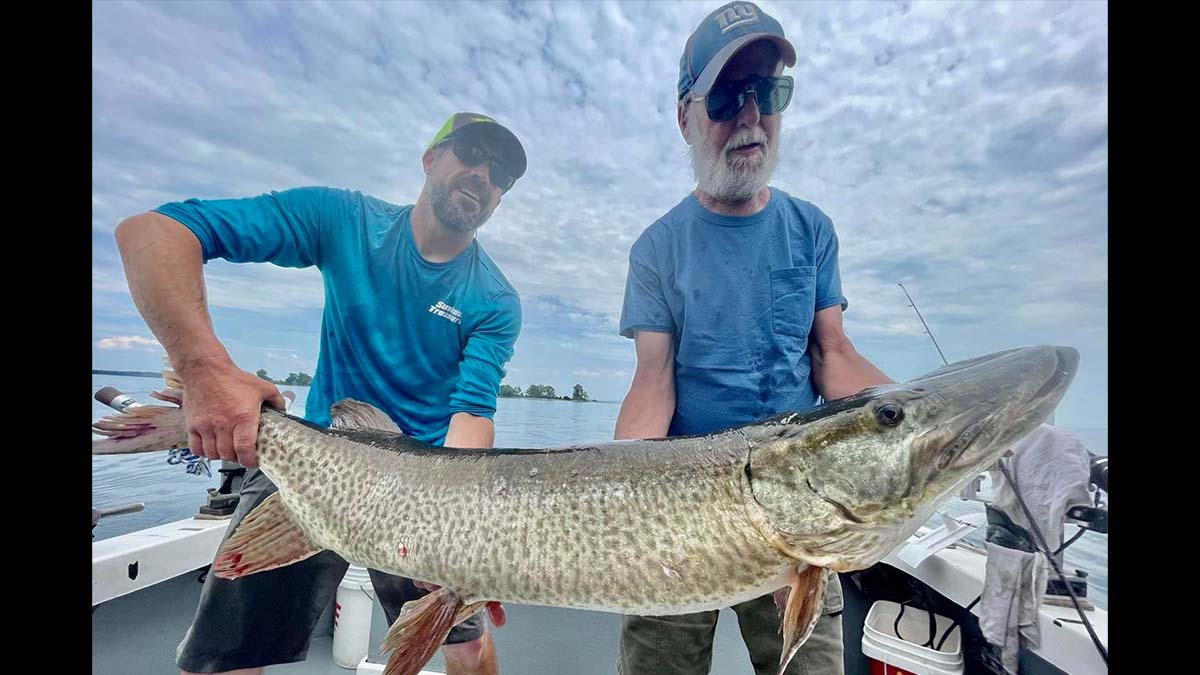 Father-daughter angling duo Bob and Stephanie Slater caught and released a nearly 5-foot-long muskie during a charter fishing trip on Lake Ontario in July. They hooked the 59-1/2-inch whopper while fishing for walleye in Henderson Bay near their hometown of Watertown, New York. The Slaters were fishing with charter captain Gene Bolton of Sunken Treasure Fishing Charters when the big fish hit.

“We were at the end of our charter, and [the muskie] hammered a Flicker in the middle of our pattern,” Bolton told the Outdoor News. “It tangled some lines up, and we had to untangle, cut, and re-tie [the fishing line] onto a different pole to be able to land it. It was quite the adventure.”

Walleye are Bolton’s main target on charters. He typically fishes a mix of Bombers, Rapalas, and Berkley Flicker Minnows. Occasionally, muskies chasing smallmouth bass and brown trout will pop one of the lures. Bolton has boated six muskies in his life, including four that were over 45 inches, but none were as big as the one the Slaters reeled in after a 30-minute fight.

Once they got the big muskie in the boat, the Slaters decided to release the trophy catch. They handled the fish only long enough to measure its length and snap a couple of photos. They didn’t weigh the fish or record its girth before easing it back into the lake. The muskie stayed on the surface for several minutes as Bolton and his clients watched nearby, growing increasingly concerned. When they eventually maneuvered closer to check on the fish, it shot off “like a cannonball,” and they were able to track its progress down to the bottom of the lake on the boat’s sonar.

“What an absolutely amazing fish,” Bolton wrote in a Facebook post. “We were extremely fortunate and beyond lucky to land this beautiful giant.”

After conferring with taxidermists and muskie anglers, Bolton estimates the muskellunge likely weighed in the 55- to 65-pound range. New York’s state record muskie is a 67-inch fish that weighed 69 pounds, 15 ounces. It was caught by Art Lawton in the St. Lawrence River in 1957.