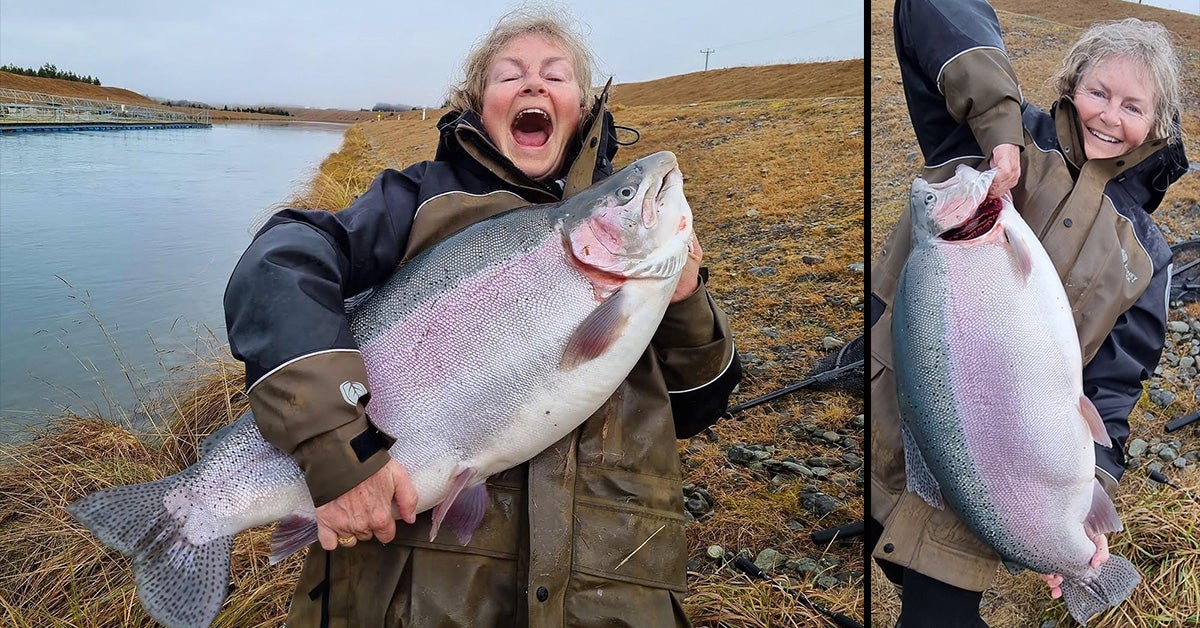 Rae Bushby has only been fishing a little bit over a year—and she’s already caught a fish that any trout angler would dream of. On August 15, she went fishing with her 88-year-old father Robert at the Tekapo Canal in Central New Zealand. Bushby says she started fishing 16 months ago and her father is her regular fishing buddy. Robert was taking a break around 10:30 a.m. on the 15th when the huhu grub—a small, mealy larva—Bushby was using for bait got hit.

“On the hook set, the line started screaming out the reel as my rod bent in a very gratifying way,” Bushby tells F&S. “I deliberately had very little tension on, as I have lost a few big ‘donkey’ fish from a broken line before. I ran down the canal after the fish thinking I had a good one on…maybe over 10 pounds!”

Bushby says her friend John was fishing about 100 yards downstream of her. The fish was running hard toward him with Bushby scrambling down the bank in hot pursuit. Suddenly, the fish stopped, and Bushby thought it had gotten the line caught in some underwater structure. “I tried putting some pressure on the line, but it didn’t budge, and I didn’t want to break my line off. John said I would have to be patient and maybe the fish would get itself off the obstacle,” says Bushby. “I reeled my line in as I walked down the canal until I was almost opposite the fish, and John and I waited and speculated on the size of the fish while I bemoaned the fact that it had got snagged. After a couple of minutes, my line started to slowly pull out of the reel. ‘Look, John,’ I called out, ‘My line is moving.’ John said, ‘Rae that’s not snagged, that’s a big fish!’”

The fish continued heading down the canal but at a slower pace than before. Soon, the fish stopped again. Bushby got downstream of it and used the current in her favor. She started gaining line on the fish again. She fought the big trout slowly, letting it take line when needed. Eventually, it breached the surface before taking off on a blistering run. By then, Bushby says the workers at a nearby salmon farm had lined up along the canal to watch the fight.

Read Next: World Record Brown Trout is Certified by the IGFA

“After a few more small runs, I managed to reel in the most gorgeous and biggest trout I have ever seen,” says Bushby. “John asked if he could net the fish for me and I readily agreed.  He grabbed my net and jumped into the water and scooped it up..… just as my hook came out of its mouth.”

The rainbow trout Bushby had caught was even bigger than she’d first thought. It was 34.6 inches long and had a girth of 27.5 inches. The fish tipped the scales at 30.31 pounds. Bushby later realized that she may have a world record on her hands. Bushby’s fish tops the current International Game Fish Association (IGFA) women’s 8-pound line class world record, which is a 29-pound, 5-ouncer caught by Emily Allum in the Tekapo Canal in 2019. Bushby has submitted a record application to the IGFA and is waiting to hear back on her potential record.

In recent years, New Zealand has been producing some absolutely bonkers rainbow and brown trout. The nation’s canals, which are comprised of high-quality, glacier-fed water, are home to massive salmon farming operations. The resident trout in the canals gorge themselves on the excess feed from the salmon farms, which allows them to grow to record-breaking proportions.

“My dad and I were flabbergasted that I had managed to catch her on my cheap rod,” says Bushby. “I’m absolutely thrilled with my effort, and that I didn’t lose this donkey of a fish!”