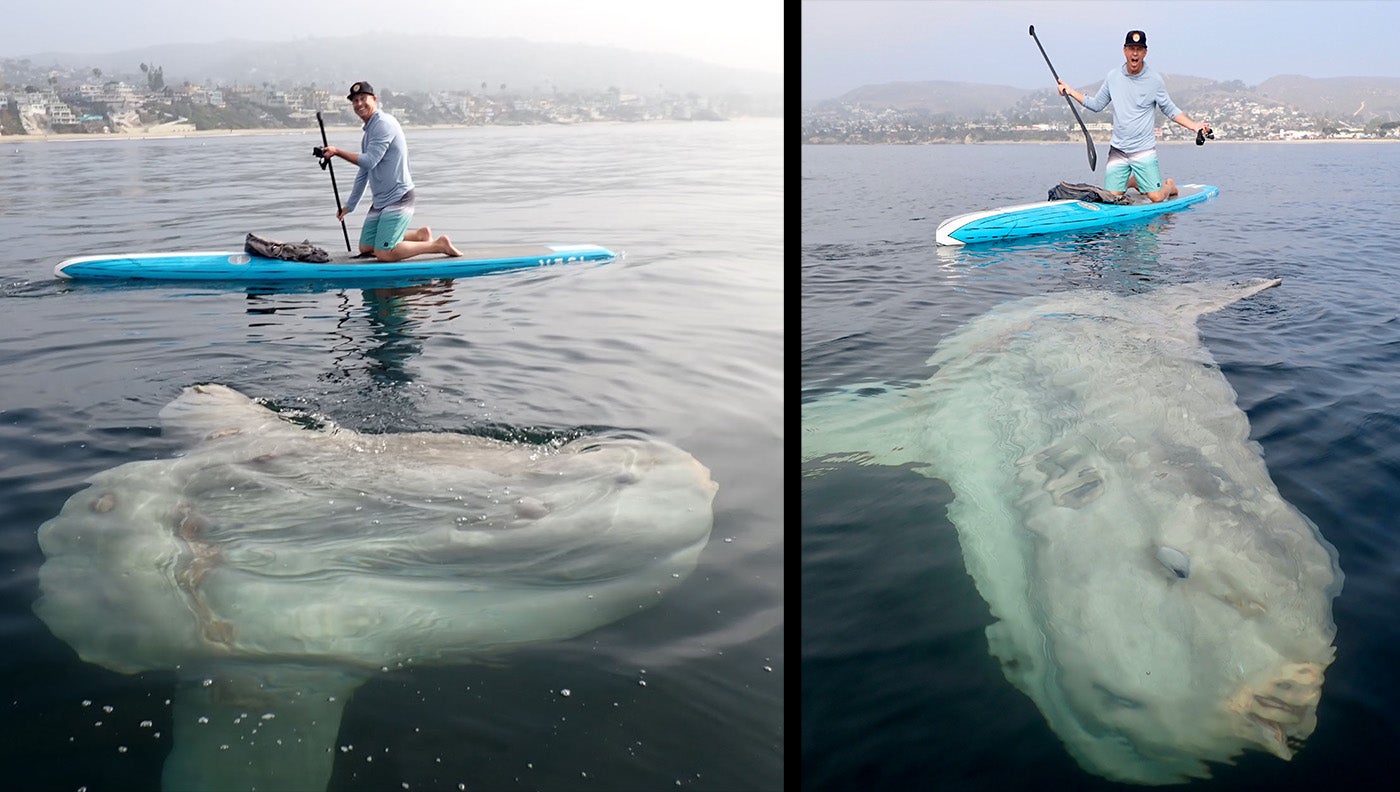 Rich German and his buddy Matthew Wheaton were out paddleboarding off the coast of Laguna Beach, California on Thursday, December 2, when they encountered a creature of stunning proportions basking near the surface of the water. It was an ocean sunfish, also known as a mola mola, that German estimates to be about 9 to 10 feet long, using Wheaton’s 14-foot paddleboard as a reference.

“I’ve paddle boarded basically every day here in Laguna Beach for the last twelve years,” German tells F&S. “I’ve had over 2,000 encounters with dolphins and whales. The most typical thing that I’ll see on a daily basis is bottlenose dolphins close to shore. So, we were out there looking for dolphins, and we just randomly stumbled across this massive sunfish.”

German says he’s seen about ten sunfish before over the span of a decade, but seeing one so close to land—about 200 yards from shore—was a surprise. All of the sunfish that German had previously encountered were at least a few miles out. “The first time I ever saw a sunfish years ago, I had no idea what it was,” he says. “It looked like a mutilated alien shark that had gotten bit in half. They’re just crazy-looking. But since I’ve seen them before, I knew what this one was right away, but what hit me was the size of it. It was just gigantic.”

The ocean sunfish is the heaviest species of bony fish in the world. According to the Guinness Book of World Records, the largest ocean sunfish ever recorded weighed over 5,000 pounds and was over 10 feet long. The large creatures are typically almost as wide from top to bottom as they are long. Sunfish feed on small fish, zooplankton, and algae. Their round shape makes them relatively clumsy swimmers. Though they’re not targeted in commercial or recreational fisheries, they are susceptible to getting snagged in gill nets as bycatch, as well as suffocating on trash like plastic bags, according to National Geographic. German is the founder of Project O, a nonprofit that is focused on ocean conservation and restoration and runs a podcast called Our Epic Ocean. He notes that he encountered the big sunfish in a marine protected zone that prohibits the take of any kind by fishermen.

German and Wheaton took several photos next to the mola mola, which was calm and docile the whole time, before paddling off. “It was just a unique, bizarre creature,” says German, who emphasizes the importance of protecting the oceans—and the incredible marine life that inhabits them.