Though still uncommon, piebald catfish catches seem to be documented more and more frequently of late 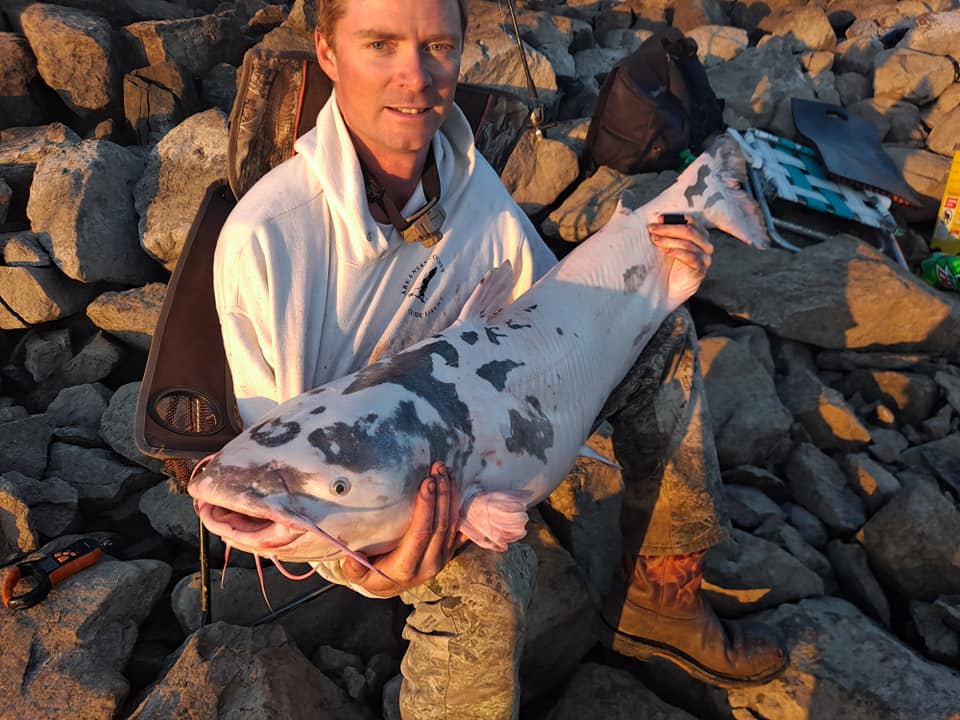 This is one of the larger piebald catfish ever caught.
SHARE

Angler Chad Hester caught and released a funky-looking 36-pound mudcat from the Mississippi River in Missouri while soaking Asian carp as bait. Hester was night-fishing with a friend on the Big Muddy when he landed the piebald catfish in the wee morning hours of October 12. The specimen perfectly fits the description of “piebald” because of the mottled bluish-and-white markings on its skin. The genetic condition is known as leucism and can affect animals and humans. Hester photographed the fish and took a video of it swimming away on the release. He plans to have a replica mount made by a taxidermist and didn’t seriously consider keeping the fish.

“He can spread his genes in the wild and somebody else might have the opportunity to catch him,” Hester told Fox2 Now. “I freaked out. I was like, ‘holy cow!’”

Piebald catfish are definitely uncommon, but thanks to social media and public interest in these critters, we have been seeing and hearing about more and more of them. When Field & Stream reported on a piebald catfish that was recently caught in the Tennessee River, many other anglers replied to our Facebook post with comments about their own similar catches. One reader pulled a piebald cat from Watts Bar Lake in Tennessee. Another caught one from the James River in Virginia. All in all, anglers commented with photos of catches from lakes and rivers in Illinois, Texas, Oklahoma, Kansas, Louisiana, Nebraska.

Louisiana angler Robyn Bordelon caught a 10-pound piebald catfish in March 2020, also from the Mississippi River. She was jug fishing with cut finger mullet to catch a mess of catfish for the dinner table when she pulled up a jug and found the 10-pound piebald. Like many other anglers who catch one, Bordelon released the fish after taking photos.

“I’ve been chasing blue cats in a kayak on the river for nine years, but that one will be remembered above all others,” Bordelon told Louisiana Sportsman. “I’ve seen pictures of blue catfish with this genetic anomaly before and of course, you bookmark that in your head, but I never thought I would catch one. I quickly got it netted, took pics, revived it, and happily watched it swim away.”

The Lower Mississippi River Conservation Committee (LMRCC) collected more than 33,600 blue, flathead, and channel catfish for research between 1997 and 2014. All told, the group documented just two piebald blue catfish in its 17 years of work. Both were caught in Mississippi, one near Vicksburg and one near Greenville. A third was reported to the group in 2012 that was caught by fisheries biologists with the Mississippi Department of Wildlife, Fisheries & Parks. The LMRCC notes that “Explanations for the coloration of piebald blues will probably remain a mystery due to their extreme rarity. Whether this rarity is due to low occurrences, or to high predation from larger fish stimulated by their conspicuous appearance, is speculative.