A Wisconsin angler caught the rare and endangered fish while on vacation in Florida. He immediately released his catch 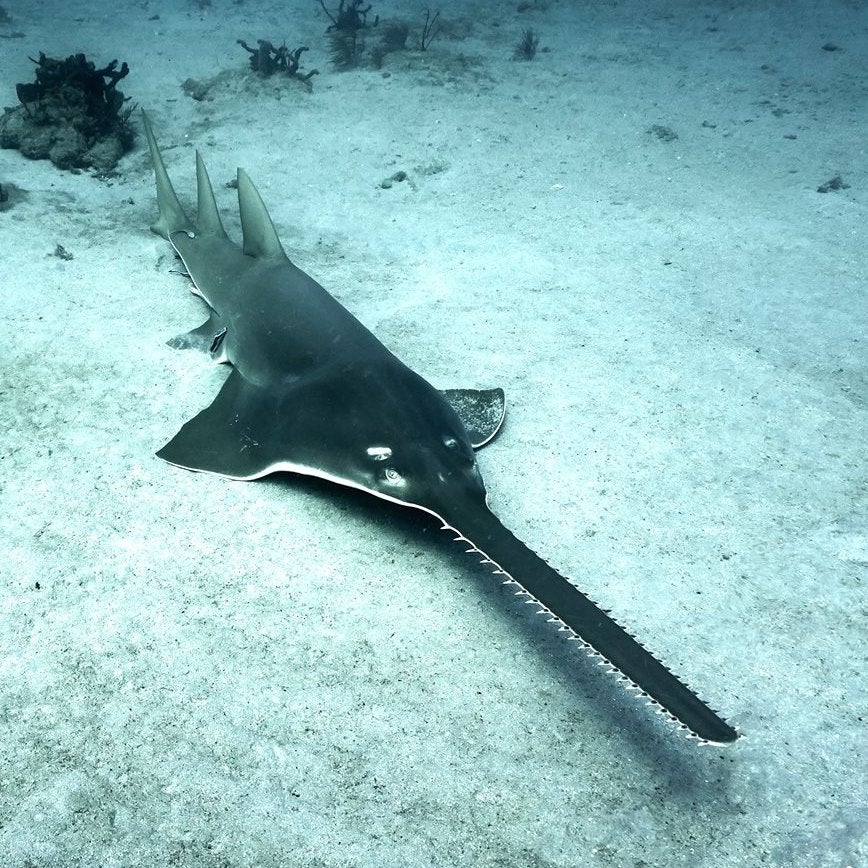 Sawfish use their rostrums—or "saws"—to slash through schools of baitfish fish and to defend themselves. Anthony Planas via FWC
SHARE

A group of Wisconsin anglers on a Florida charter boat were fishing for sharks when they reeled in a rare and endangered sawfish. Captain Parker Miley of Fin and Fly Charters, which is based in central Florida near the Kennedy Space Center, put the anglers onto a good-size blacknosed shark before the unexpected quarry took the bait.

Miley was soaking a hunk of kingfish in 20 feet of water several hundred feet from shore. When he set the hook, he initially thought a shark had taken the bait, but the fish didn’t make a big first run. Instead, it steadily ticked line off of the reel. Angler Kevin Therriault took 20 minutes to fight the 13-foot fish and bring it boatside.

“Oh my God, it’s a sawfish! You guys, this fish is super rare!” Miley said, as reported by Florida Today. The anglers snapped a couple of photos as Miley immediately released the fish without removing it from the water—as is required by federal law. Sawfish have been listed under the Endangered Species Act since 2003. A video of the encounter was posted by the TCPalm:

What Is a Sawfish?

There are five species of sawfish worldwide. The sawfish caught in Florida was a smalltooth sawfish. It is a species of ray, though it swims like a shark. Sawfish are known for their long, toothed “rostrums” or “saws,” which protrude from the front of their flattened bodies. These saws are used for digging, as a weapon, and have small pores that can detect electric fields produced by prey. A big sawfish can grow up to 17 feet long and weigh 1,000 pounds.

Sawfish were nearly extirpated from U.S. waters by the late 1990s. Scientists and wildlife managers have been fighting to save the species ever since. It’s illegal to intentionally target them. Florida anglers that unintentionally catch a smalltooth sawfish are asked to release it unharmed and report it to the Florida Fish and Wildlife Conservation Commission.