Levi Bennet wrestled this monster flathead from an East Texas lake; it's one of the biggest ever caught by any fisherman 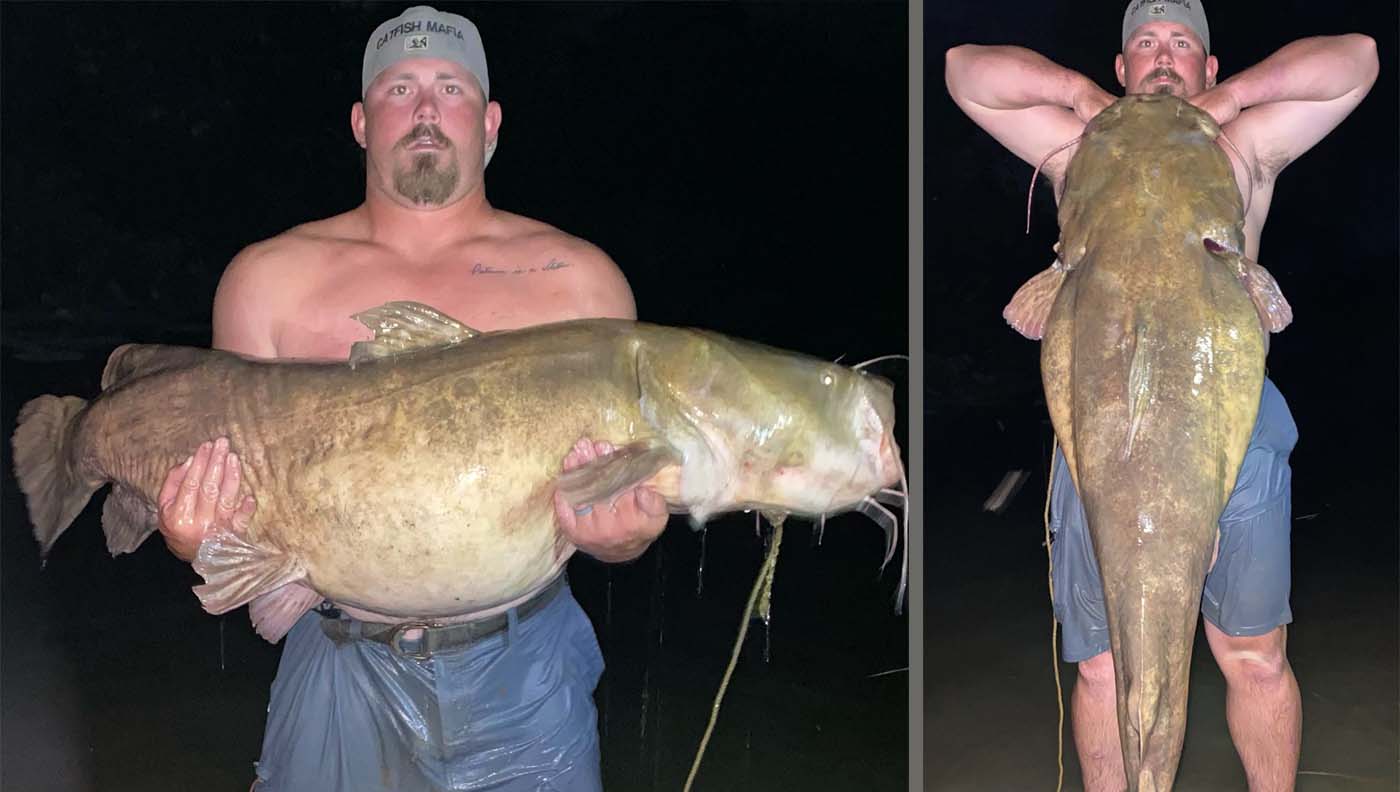 Levi Bennett thought the big one had gotten away.

Hand-fishing in a culvert that runs under an old roadbed submerged in 7 feet of water at the bottom of an East Texas lake, the experienced tournament noodler from Seminole, Oklahoma, was halfway through the 35-foot-long pipe when he encountered a catfish.

“I felt it and got my hand on it, and it was an absolute giant,” he says. “But plain and simple that fish whooped my ass. Just wore me out.”

The catfish escaped out the same end of the culvert that Bennett entered. He followed it out and surfaced. His wife, Kodi Bennett, a three-time winner of the women’s division at the Okie Noodling Tournament, was blocking the opposite end of the pipe with fellow noodler Jimmy Millsap.

“Kodi and Jimmy were both looking at me like I’m an idiot,” Levi Bennett recalls. “I said, ‘He’s gone.’ I was mad.”

“No, he’s right here,” Kodi told her husband. “He just bumped my foot. Get back in there.”

Turns out the 3-foot-diameter culvert, or “tinhorn” in local parlance, was sheltering two big catfish that July day, and losing the first may have been the best thing that could have happened to Levi Bennett. He dove again, swam toward the far end of the culvert, where a second fish was trying to break through the blockade thrown up by his partners. “My one thought was Don’t screw it up this time,” he says.

Bennett once had an escaping fish smash his face and loosen some teeth, so now when he swims into tight squeezes under boat ramps or inside culverts, he goes in backwards, scuttling like a crawfish, in order to take the shock of any collision with his feet, not his face.

“Out of habit I started in backwards, but I realized that if I was going to catch this fish, I’d better turn around. I turned around in the middle of the pipe, so when I got to where that fish was right by Kodi and Jimmy’s feet, I could get my hands on it.”

Grabbing the fish’s bottom lip with his left hand and the gill plate with his right, he emerged with his biggest catch ever—a 58-inch-long flathead that topped 100 pounds.

“As soon as it broke the surface of the water I knew it was the fish of a lifetime,” says Kodi, whose personal best is a 74-pound. tournament-winner. “I was in amazement. I’ve never seen a fish that big.”

“For some reason she did not want to turn around and fight me and didn’t try to blow out my end of the pipe,” says Bennett, who was using a scuba tank and regulator. “She was bound and determined to get out Kodi and Jimmy’s end. She thrashed a couple of times, but once I got my hands on her it was about over.”

Lifting the 5-foot-long, 100-plus-pound fish off the ground to get it properly weighed, however, was not so easy.

“The scale went to 94, then 95, and when it hit 97 I just about dropped it, I was so stinking excited,” Bennett recalls. He knew then that he’d topped a family record of 96 pounds, set by an uncle back in the 1960s, that he’d been told time and again was unbreakable. “At that point, Jimmy says to me, ‘You ain’t even got her off the ground yet,’” Bennett recalls. “I looked down and probably a foot of her tail was still on the ground.”

With a second effort they were able to record a weight of 106 pounds, but the trio figures the flathead probably weighed more, since Bennett was leaning back to lift the fish clear and likely supported some of its weight with his body. They declined to prolong the fish’s stress by searching for an official scale, electing instead to snap a few quick photos before releasing it unharmed.

“You just don’t see fish like that very often,” says Bennett. “To me, it’s not worth killing a fish that big and that old just to have some record.”