These are the weirdest underwater specimens we wrote about this year 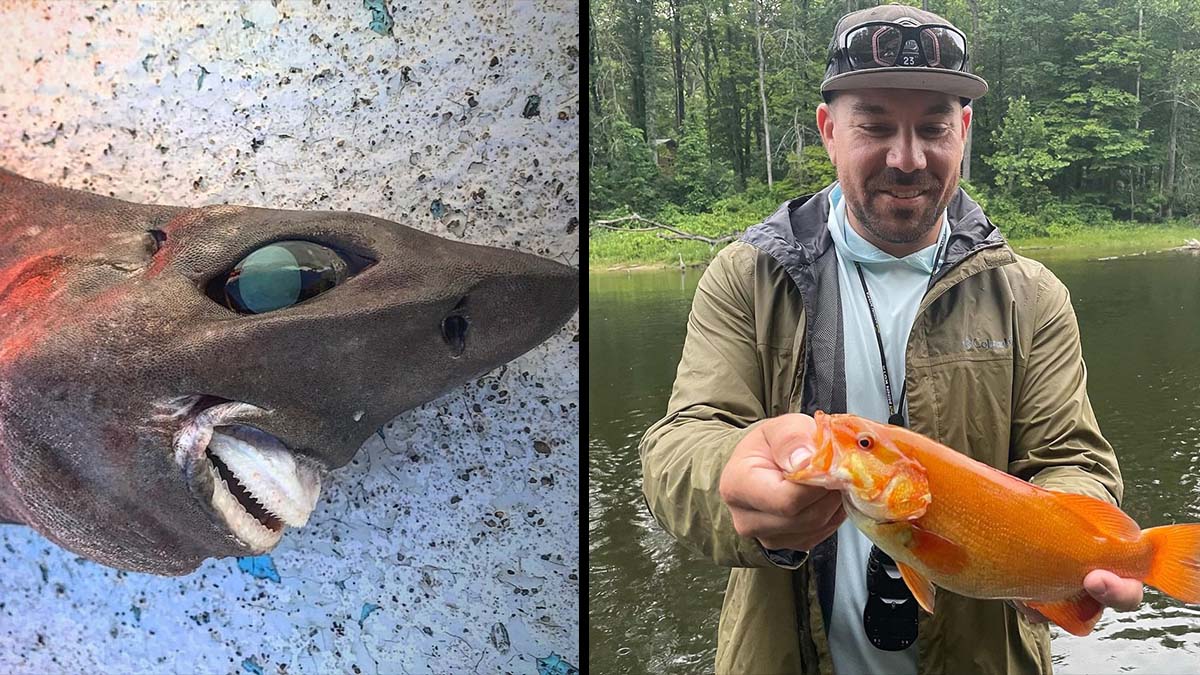 It’s been another year of weird fish. After a number of unusual underwater creatures were caught in 2021, anglers managed to document some truly wild specimens this year. These aren’t the biggest fish of the year—but they’re some of the most notable catches regardless. If anything, it underscores one of the best parts about fishing: You never really know what you might reel in.

1) A Pufferfish With Buck Teeth

Angler Ruta Gudo caught a puffer with an orthodontist-approved set of gophers while surf fishing in Cabo San Lucas last summer. The fish’s big front teeth and pink gums look startlingly similar to what I imagine Huck Finn would’ve looked like. The fish is most likely a bullseye puffer, which is apparently relatively common along the Pacific Coast from Southern California to Peru. Regardless, it’s a strange sight to behold.

2) The Biggest Goldfish of All Time

Ok, this isn’t actually a jumbo-sized goldfish, but it sure looks like one. Andy Hackett of Kidderminster, England, landed the 67-pound, 4-ounce hybrid carp while fishing at a pay lake in France. The fish is fittingly known as “The Carrot” and was stocked into the lake as a unique catch—and it is. Just imagine seeing a giant carp with neon-orange scales at the end of your line.

This thing is creepy. Seriously. In September, Australian fisherman Trapman Bermagui caught a totally weird-looking shark, replete with bulging blue-green eyes and a toothy smile. Experts disagree on exactly what kind of shark it is, but it’s surely a deep-sea-dwelling fish. One commenter called it “the stuff of nightmares,” which is an apt description.

I’d bet you’d money you’ve never caught—or even set eyes on—a smallmouth bass quite like this one before. Josh Chrenko caught a stunningly orange smallie while fishing the Muskegon River in Michigan in July. It has a rare genetic condition called xanthochromism, which occurs when red pigmentation is replaced with yellow pigmentation. That the fish appeared to be thriving in the wild despite such bright coloring makes the catch even cooler.

Been hoping to see one of these in person for a long time! Blotched snailfish (Crystallichthys cyclospilus) pic.twitter.com/RHxvxAeTog

Here’s a fish that looks—and feels—like Jell-O. It’s actually known as a blotched snailfish, a species that lives in depths of up to 3,000 feet below the surface. The strange-looking specimen was caught by researchers assessing ocean health in the remote environs of the North Pacific. Blotched snailfish actually produce an anti-freeze protein that keeps them from freezing in such frigid waters.