Remarkably, the fish came from a reservoir that has only had five—yes, five—striped bass hybrids stocked in recent years 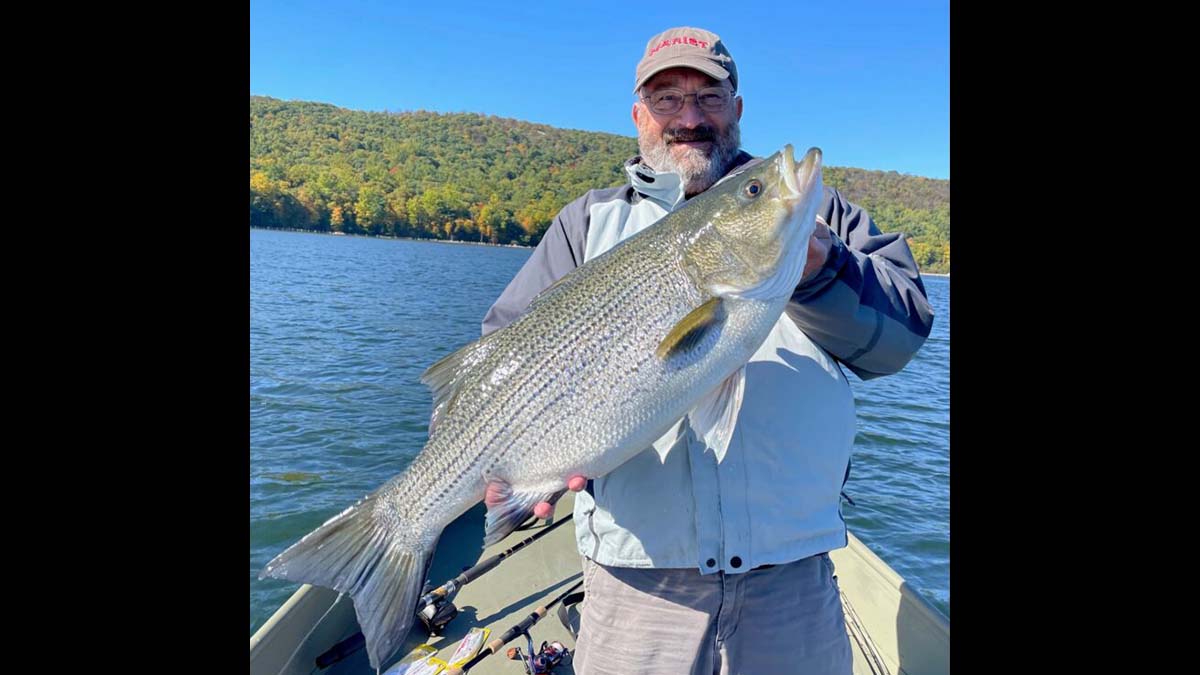 A New Jersey angler trolling for walleye at Monksville Reservoir on October 9 caught a state-record hybrid striped bass. John Vayda hooked the 16-pound, 10-ounce fish while trolling in 20 feet of water. It measured 31 inches long with a girth of 23 inches, according to a New Jersey Department of Environmental Protection (NJDEP) press release.

Striped bass hybrids, which are also known as wipers, palmetto bass, or whiterock bass, are a cross between a female striped bass and a male white bass. First introduced in South Carolina in the mid-1960s, they were initially stocked in reservoirs across the Southeast and have since been widely introduced across the United States. The hybridization creates a fast-growing, aggressive, hard-fighting fish well adapted to large lakes and reservoirs with big expanses of warm, open water.

Vayda’s caught his record wiper using 12-pound monofilament line and a St. Croix rod paired with a Daiwa reel. It beat the previous record, which was set by Bill Schmidt in 1999, by six ounces.

NJFW officials said the fish was most likely from a “small stocking” in May 2017. Data on the striped bass hybrid stocking program shows exactly how small: Of the more than 47,000 hybrid stripers stocked in five Garden State reservoirs that year, only five fish were released at Monksville. The stocked fish were on the large side, ranging in size from 16 to 25 inches with an average weight of 5 pounds—but not even close to state record caliber.

Unlike many hybrid species, wipers are fertile. That said, New Jersey wildlife officials say natural reproduction is “limited or nonexistent” in the state. Populations are maintained by a program that annually stocks 40,000 to 60,000 hybrids from New Jersey’s Hackettstown Hatchery. According to the online stocking data that spans 13 years, the “small stocking” of fish in Monksville in 2017 was the only hybrid stocking the lake has ever received. That one of those five fish could survive and thrive long enough to become a state record is remarkable.