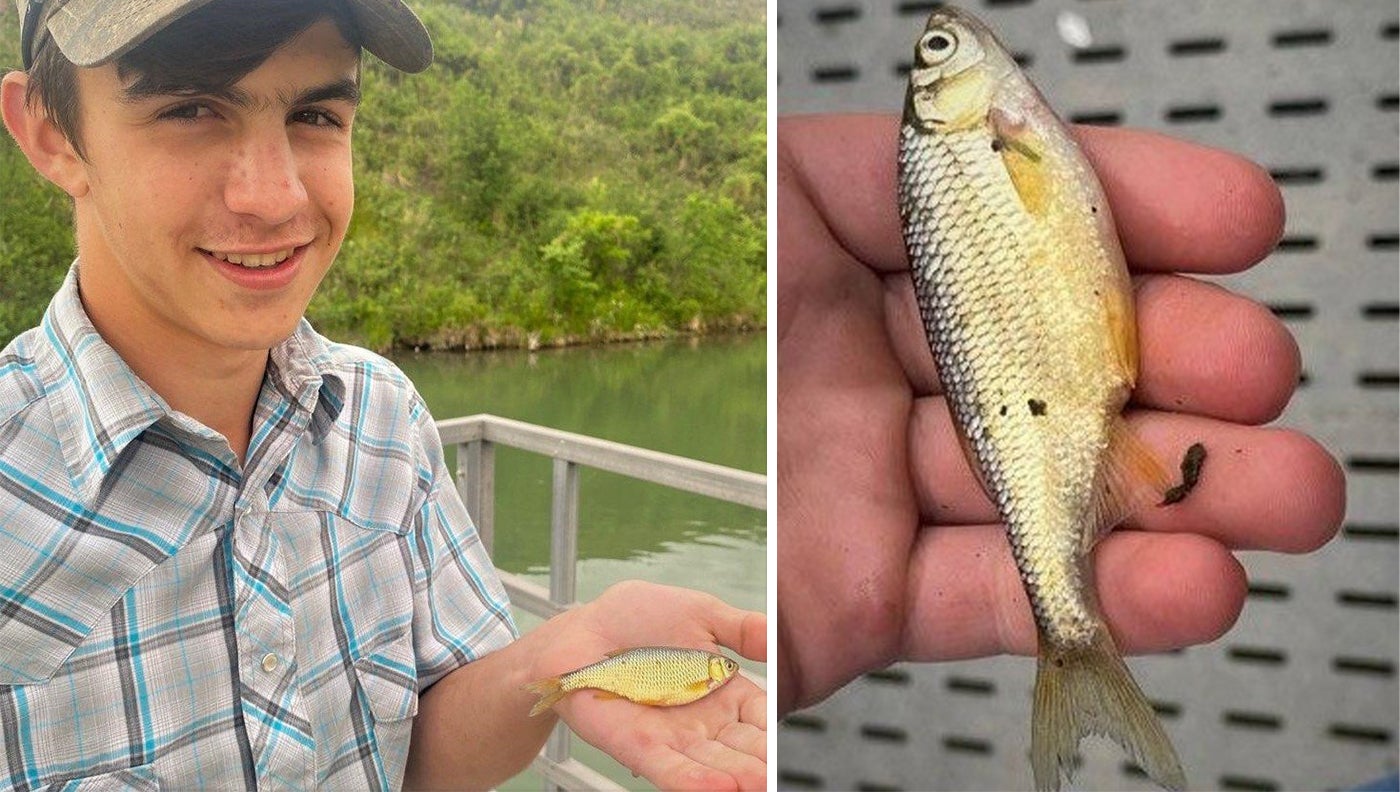 Sam Grisak's catch is not just the biggest golden shiner in the state record book, it was the first one ever submitted. Montana Wildlife and Parks
SHARE

Fifteen-year-old Sam Grisak of Great Falls, Montana, is in the record books with a beast of a…baitfish. Montana Fish, Wildlife and Parks heralded the haul with a press release and a Facebook post on Friday. The golden shiner tipped the scales at 0.03 pounds and measured 4.41 inches, with a 2.6 inch girth. The record-setting slab, which stretched almost all the way across the teen angler’s palm when he posed for a photo, also holds the distinction of being the first golden shiner ever submitted to the FWP’s record book.

“Grisak’s catch adds to the growing list of new Montana record fish caught in the last year and a half including a Utah chub, a walleye, a chinook salmon, a smallmouth bass, a yellow bullhead, a brown trout, a longnose sucker, and a largemouth bass,” the FWP said.

With his catch, Grisak also narrowly missed the achievement of holding the smallest record fish in the Montana record books. But, he’ll have to settle for third place, as Joe Hagengruber caught a 0.02-pound spottail shiner, measuring 3 inches, on August 14, 2010, and Ike Braaten, topping the list of smallest fish, landed a sleek 0.01-pound emerald shiner, at 3.43 inches, on June 9, 2006. Grisak’s golden shiner bested the former third-smallest record fish, a 0.063-pound rocky mountain sculpin, by a whopping 52 percent.

According to mt.gov’s Field Guide, “The golden shiner is an introduced species that has been stocked into ponds and has escaped into slow running streams and rivers east of the Continental Divide in Montana. It was probably introduced into our state as a forage fish or as the result of bait fishing.”

The guide also notes that golden shiners are native throughout the eastern half of North America, north to the St Lawrence River, Great Lakes, and Lake Winnipeg, and west to the Dakotas and Texas. Because they are used widely as bait, they have been introduced in many places outside their native range.

Golden shiners can grow to lengths of about 8 inches. So, now that they are officially in the Montana record books, it is quite possible that Grisak’s record may last a record short amount of time.