Luis Hernandez Martinez, 19, landed the record fish on Saturday. It's the biggest king ever caught in the Great Lakes 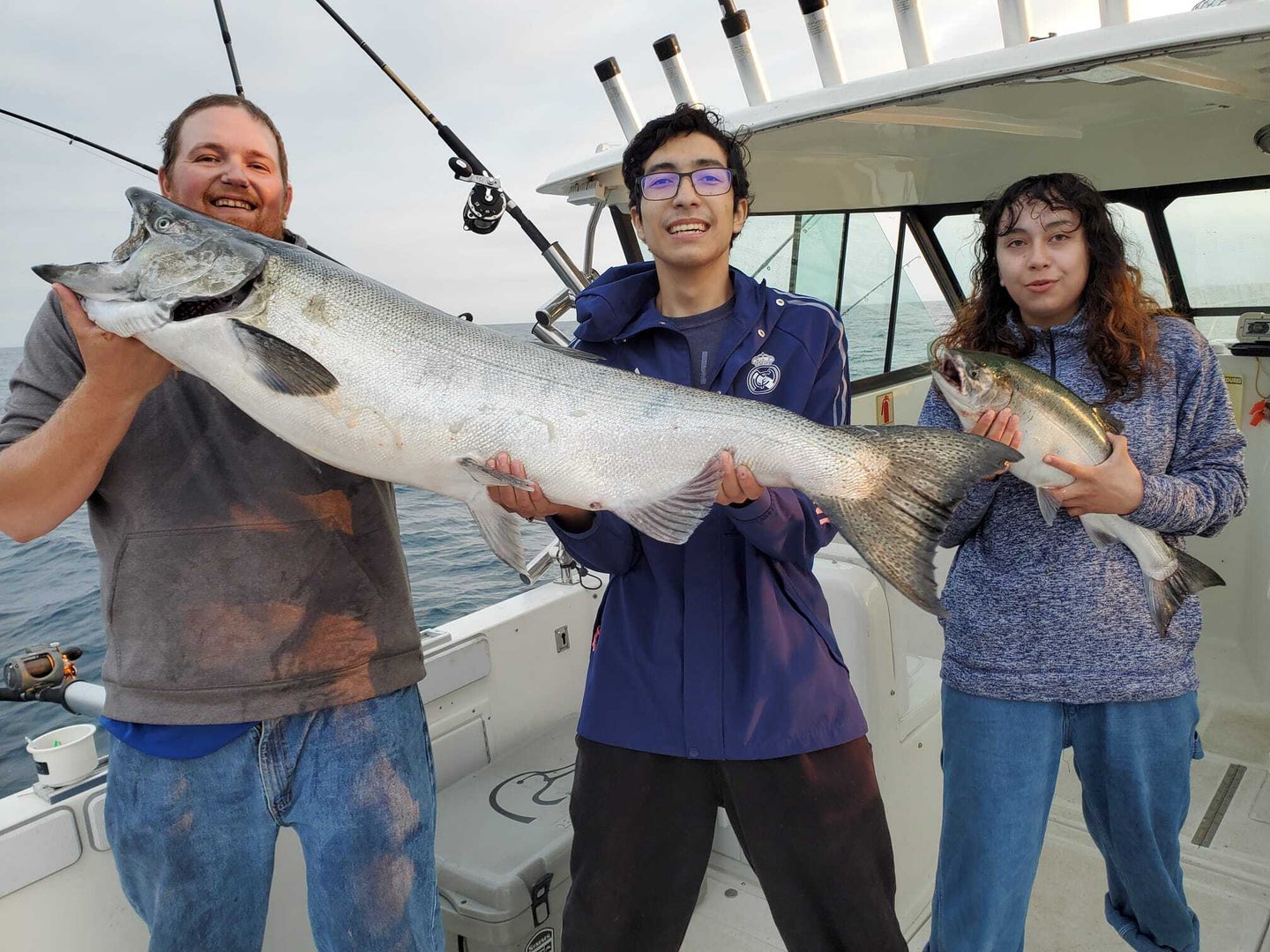 As daylight broke over the eastern shoreline of Lake Michigan on Saturday, Captain Bobby Sullivan netted a huge Chinook salmon for his client, Luis Hernandez Martinez. A few hours later, the fish was certified as the new state-record king; officially weighing in at 47.86 pounds. It’s also the largest to ever be taken from all five Great Lakes.

Martinez, 19, was with his mother and sister aboard a 28-1/2-foot Baja Cruiser, the IceBreaker II, out of Ray’s Auto Marine.

At approximately 6:15 a.m. on August 8th, the behemoth hit a Moonshine Lures Magnum spoon in Raspberry Carbon, trolled at 2.9 MPH off Big Sable Point, north of the Port of Ludington, Michigan. “The first 20 minutes of the fight was tough,” says Martinez. “My arms were tired and in pain. Then, after the fish jumped out of the water, it got a little easier.” Captain Sullivan noted the time was 7:01 when the fish was safely in the boat, after a 45-minute tug of war.

“Most everyone I talked to said they figured the fight would have taken much longer,” says Martinez. “I guess it wore itself out about halfway through. And once it was in the boat, I thought, Wow, that’s a big one; that’ll make for a lot of meals.” This was the first salmon for the Ortonville, Michigan, teen.

Captain Sullivan had previously entered in the “Big King Bonanza” at Captain Chuck II’s in Ludington. It never occurred to him that the fish might be a state record, but he thought would go over 30 pounds, which would also put the fish into the area’s “Thirty Pound Club.”

“I had already called Captain Chuck II’s to let them know a big fish was coming their way; then we got back to the marina and hung the fish on their scale,” says Sullivan. “It read 47-plus. I thought, that can’t be right, and weighted it a second time.” Another call was made to let an area tackle shop know that a potential a state-record fish was coming in.

The fish was again weighed at the tackle shop, and showed a similar weight. But the previous two scales were not certified by the state. The 47-1/2-inch goliath was then taken to nearby Northside Market for an official weight, and an MDNR biologist was called in to confirm the species. The fish is now headed for the taxidermist for a skin mount and replicas.

Martinez’s Fish Breaks Old Record By More Than a Pound

“What really impressed me was how quickly the whole process took place, from the response of the DNR, to just how the whole community helped out and were just as excited as I was,” Martinez notes.

For curious anglers looking to catch their own monster king, Sullivan was long-lining the spoon at a depth of about 60 feet over the 200 feet of water, using 45-pound-test Torpedo Weighted Steel line and a 30-pound-test Sufix Siege monofilament leader. The rig was being pulled behind a Dream Weaver Ninja Speed Planer in-line planer board. The rest of the equipment was an 8-1/2-foot Okuma copper line rod and Okuma Convector CV55L Star Drag reel.

Michigan’s previous state-record Chinook salmon was 43.5 inches and weighed 46.6 pounds, taken in 1978 and caught by snagging (legal in some rivers at the time) in Kent County’s Grand River. The largest ever taken from any of the Great Lakes, according to the Ontario Federation of Anglers and Hunters, was a 47-inch king that weighed 46.38 pounds, caught in Lake Ontario near Oakville, Ontario.