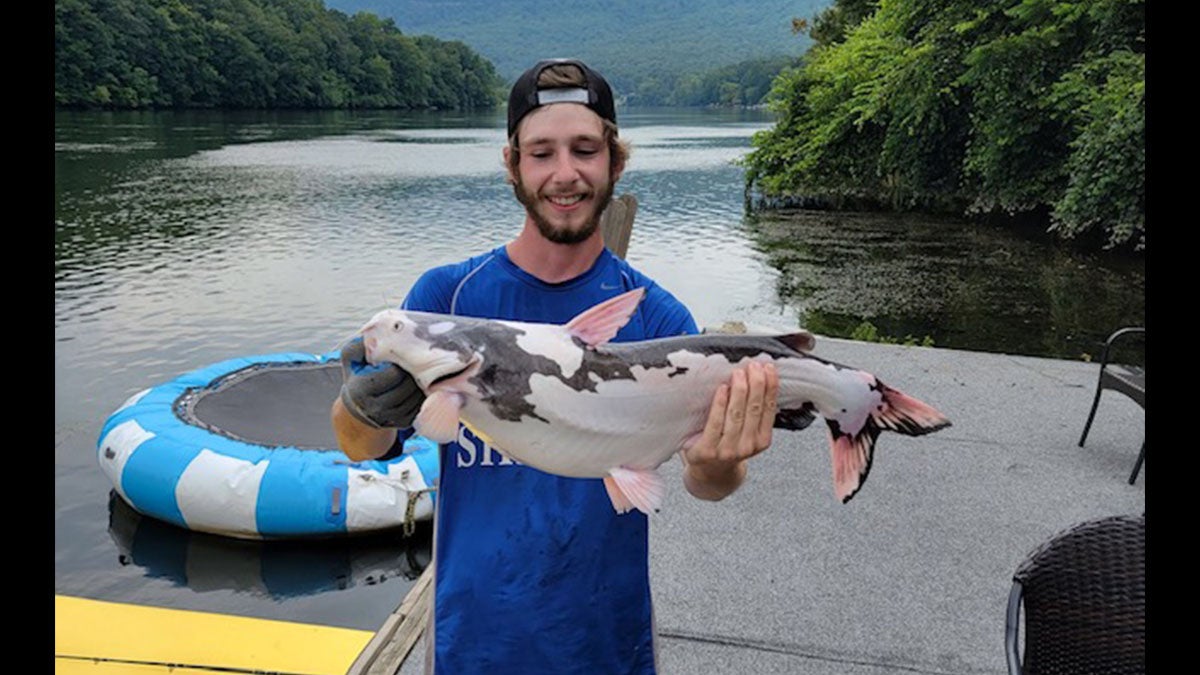 Drymon was drift fishing in the middle of the river with a 7-aught circle hook baited with chicken liver when he hooked up. Using a 5 ½-foot medium heavy rod spooled with 17-pound monofilament fishing line, he took his time playing the fish. After about a 10-minute fight, he got his first look at the surprising catch.

“When it came up and I actually seen (sic) the color configuration of it, I was really amazed and amused by it,” Drymon tells F&S. “I was like pretty much like, ‘Oh my God. I just caught a cow catfish.’”

The blue catfish was mostly white, with splotches of dark gray scattered across its back and pink coloration visible on its fins and barbels. The blue cat’s eyes were not pink, as is usually the case in albino fish.  Piebald fish—or horses, dogs, birds, and, yes, cows—are thought to have leucism, a condition caused by defects in pigment cells in skin, hair, or feathers that can lead to animals that are all white or have patches of white mixed with normal coloration.

The Tennessee River is a Hotspot for Strange Catfish Catches

The Tennessee River, which starts in Knoxville and flows through parts of Alabama, Mississippi, and Kentucky before emptying into the Ohio River at Paducah, has produced several atypical blue catfish in the Chattanooga area recently. In April, Farrah Reidt caught a 33-inch albino blue catfish while night-fishing near the city’s downtown.  In June, 15-year-old Edwards Tarumianz caught an all-white blue cat while fishing on a Chattanooga charter boat. Tarumianz’s fish had pink fins but not pink eyes, suggesting it may have been leucistic.  In September 2021 yet another angler caught a leucistic blue catfish in the tailwaters of the Chickamauga Dam, which is also on the Tennessee River in Chattanooga.

For most anglers, catching a leucistic fish is a once-in-a-lifetime event.  “I actually knew nothing about this until I reeled it up,” Drymon says. “I didn’t know there was such a thing as a piebald catfish. After I caught it, I paddled over to a dock where a couple of fishermen were hanging out. One of them is a charter captain who has been fishing all up and down the Tennessee River for years, and he’s never seen one like this. He was pretty amazed by it too.”

Drymon did not attain a length or weight on the fish, though he estimated it weighed about 15 pounds. After snapping a couple of photos, he released it. “Whenever I catch really nice catfish, I always want to get them back into the water as soon as possible,” he says, “so other people can catch them.”