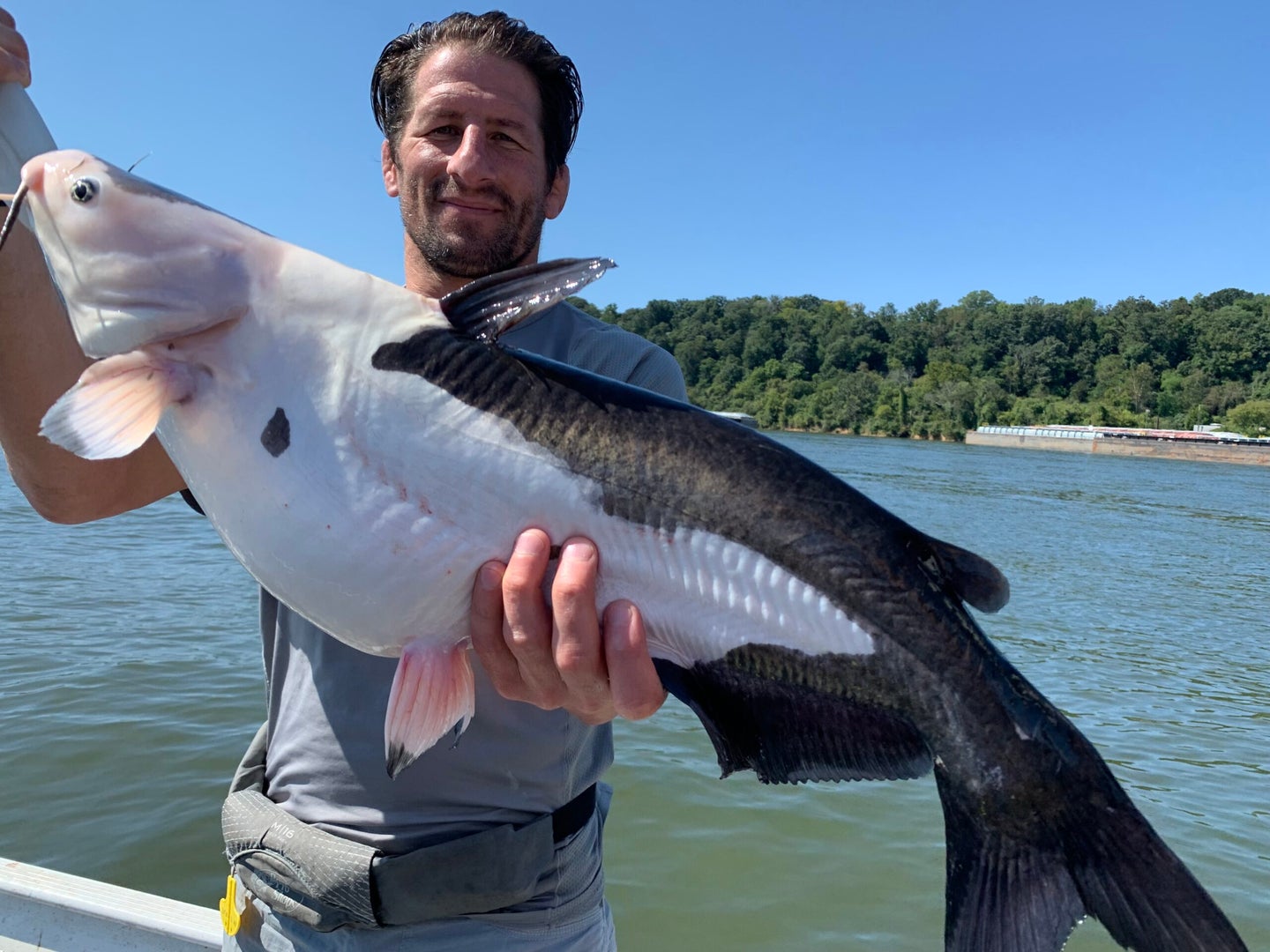 Captain Joe Jellison knew a catfish was on the end of his angler’s line, but he had no idea it would look like it did. One of Jellison’s clients, Rocco Mansueto, reeled in a rare piebald catfish that had distinct white-and-black coloring on a September 25 fishing trip. At the time of the catch, Jellison and his three clients had already boated some smallmouth and largemouth bass, as well as a striped bass in the Tennessee River tailwaters below Chickamauga Dam. When the bass bite slowed, the quartet decided to focus specifically on blue catfish—and had already caught some nice ones, including a 27-pound blue cat, when Mansueto reeled in the piebald fish.

Scenic City Fishing Charters, the guiding company that Jellison works for, is based in Chattanooga, Tennessee. The tailwaters below the Chickamauga Dam are perfect for drifting shiners, skipjack, and other bait for cats and bass. Jellison has seen a lot during years on the water guiding and filming for his popular YouTube channel Chatt Cats Fishing, but Mansueto’s catch left him awestruck.

“I’ve never had a client catch a piebald catfish before,” Jellison says. “They are quite rare—one-in-a-million chance of getting one. They are actually blue catfish with a genetic mutation. We typically catch blues and channels when drift fishing, so seeing the piebald catfish surface was quite the surprise. Rocco honestly didn’t know what to think or say. I told him many fishermen will fish their whole life and not catch a piebald catfish.”

The piebald catfish likely had leucism, which is a condition resulting from the partial loss of pigmentation in the skin. It can occur in the skin, hair, fur, or feathers of animals. Leucism is distinct from albinism, a congenital condition that causes the absence of any pigmentation, resulting in completely white hair, feathers, scales, and skin—and usually pink eyes.

To catch the piebald catfish, Jellison had set his client’s rod up with chunks of raw chicken breast. It’s an old, proven tactic for the Chickamauga Dam tailwaters. He and the anglers were free-line drift-fishing using spinning rods spooled with a 10-pound monofilament mainline and 20-pound shock leader. Jellison drifts for cats without any weights or sinkers. He ties a barrel swivel to the 10-pound mainline and then runs a 12- to 14-inch leader off of 20-pound mono. He goes heavier when he anchors on deeper holes or when targeting bigger blues. Jellison says it’s not the first time a Scenic City Fishing Charters guide has been involved in the catch of a piebald catfish. Fellow guide Sam Simons landed one a couple of years ago just across from where Jellison’s client caught his.