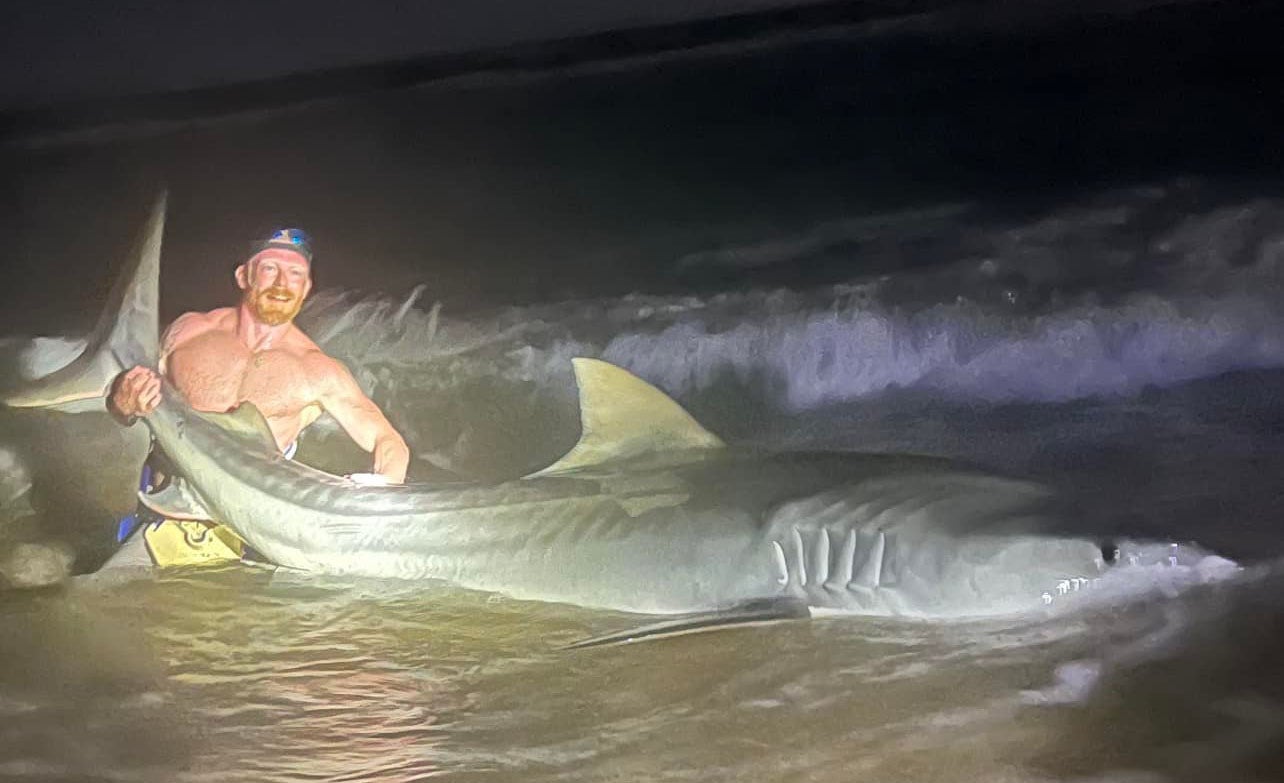 Christian Haltermann made a bucket-list catch last weekend. He was fishing with his 8-year-old son Hub at a beach at Padre Island National Seashore near Corpus Christi, Texas. The duo arrived Friday afternoon to camp out at the beach for the weekend. Haltermann kayaked out 10-pound cownose stingray baits about 1,000 yards out from shore.

“He was pretty much like a freight train,” Haltermann tells F&S. “He picked the bait up and dumped about 400 yards of line on the initial run. He almost got us down to the spool, but I was able to stop him.”

Haltermann gained back some line before the shark took another blazing run. They went back and forth for about two hours before Haltermann was able to bring the beast to the shallows. He was using a Penn International 80 reel spooled with 130-pound braid. With the shark close to shore. Haltermann sent his son Hub down the beach to find a couple of other beachgoers who helped hold the rod as Haltermann got a tail rope on the fish. They kept the big shark in the wake as they removed the hook and measured the fish. It came in at a whopping 12 feet, 5 inches.

“This was by far the largest shark I’ve ever caught,” he says. “I’ve landed a couple over 10 feet and a few other nice tigers in the 9-foot range, but this was the biggest. The sheer mass of her blew me away. It was mind-boggling. The pictures don’t do her justice. She was easily 1,000 pounds.”

Haltermann volunteers for the National Oceanic and Atmospheric Administration. He tagged the shark before releasing it. Haltermann says the release was successful and the shark swam off strongly.

Haltermann wasn’t the only one ecstatic over the big fish. His son Hub, a seasoned shark angler himself, who reeled in several nice blacktip sharks in the 4-foot range on his own over the weekend, was also impressed by the size of the tiger shark. “Hub was blown away,” says Haltermann. “He said it looked like a tiger shark and megalodon had a baby. Those were his exact words.”

Haltermann and Hub often spend weekends camping out together on the beach in search of mega-sized sharks. With the accomplishment of beaching a 12-foot tiger shark checked off of their goal list, Haltermann says they’re turning their sights to breaking 12 feet with a hammerhead shark.

“I like shark fishing because of the allure of facing a monster,” he says. “A shark is the biggest thing you can target from shore. I’ve been doing it since I was 8-years-old with my dad and grew up fishing that same stretch of beach where I caught the tiger shark.”