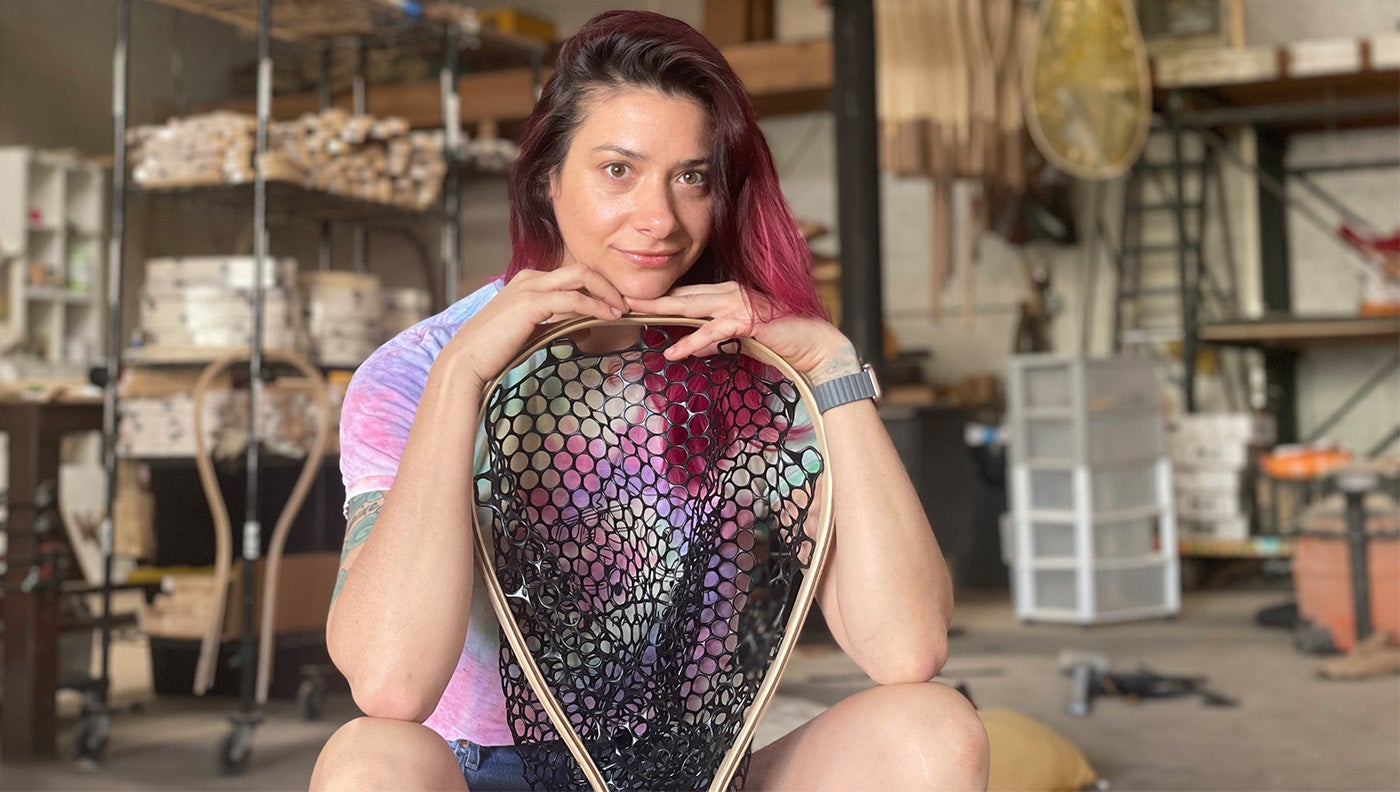 The artist, in her studio, leans on one of here handmade fishing nets. Tina Lewis
SHARE

Field & Stream caught back up with Tina Lewis, proprietor of The Wayward Trading Post, whom we featured in a story earlier this year. Lewis was a proposal-development specialist in a multi-billion-dollar pharmaceutical company and dropped everything to start making fly-fishing landing nets from her wood shop in Philadelphia, Pennsylvania. Custom-made, handcrafted, and often adorned with original artwork or artifacts, Lewis’s nets sell for anywhere from $100 to $1,000. Through them, she expresses her passion for art, music, the outdoors, and the stories of her clients. Below is our conversation.

So, why fly-fishing nets?

You fly fish, then?

Well, I’m not very good, but I do. I have 20-foot ceilings in my shop, so I practice casting when I need a break from work.

You could spin fish.

Well, I’m an artist. I gravitated to fly fishing because it’s an art. And I like to work toward a goal.

Tell me about that first net and how it evolved into the business?

It was for a family friend, Jake. I did my very first epoxy illustration on it as an experiment. It became our logo, a trout with a bear inside it. Word spread and I started taking it more seriously. I knew I wanted to leave my corporate job and focus on making art and building things. In time, I was able to change tracks. We ended up calling that style of net the “Fat Jake.” I even recently made one for that same friend’s new baby.

You made a fishing net for a baby?

Haha. It’s the perfect way to start a life—fishing. The net is an heirloom.

How do you do an epoxy illustration?

The first step is to hand draw the illustration. Then I cut it out of the wood with a laser cutter and Dremel. Then I color epoxy and use it as paint. Epoxy doesn’t come colored, so I spend a lot of time playing mad scientist to get the colors right. Even then, it’s like painting with ketchup and mustard. They just want to run into each other, so it takes some trial and error. Epoxy is sort of its own monster. It is thick, sticky, and gooey. It has to be molded and shaped without it mixing with the other colors that are near it. I am writing my own rule book on this one, and I love it. The result is a permanent inlay that can’t scratch off. It is literally embedded into the wood.

And if the trial becomes an error?

I have to throw the net away and try again because the wood is too thin to sand it down and start over.

How much time does does it take to make your typical net?

Six weeks on average. The longest so far is one I’m creating with a full epoxy handle. I poured a layer of epoxy, lightly tinted with blue and green alcohol ink, into a wood frame. Once it cured, I painted a few fish and some plants between more layers of epoxy. A fly tier tied me a fly, which I will also epoxy to the top. I have been working on this one since January.

Tell us about your favorite net?

Ken Hill, a 24-year active duty army combat vet earned his Bronze Star while serving as a Combat Engineer Sapper in Iraq for 17 months in 2003 and 2004, including operations in  Baghdad, Fallujah, and Karbala. Ken entrusted his medal to me to be memorialized within a custom net.

I was pretty nervous to have something that important. I did a few tests with pins and a variety of fabrics before I decided on a method. After hand-carving an opening into the walnut handle, I separated the ribbon from the medal and delicately painted it with epoxy and cured it before putting it back on the medal. Once the whole thing was cured, I poured the epoxy over the whole thing and UV protected it.

Do any other memorable nets come to mind?

The most memorable experience was creating a net for a young man named Thomas whose father adopted him and his four siblings. Thomas was in medical school finishing his residency and spoke about his dad with such reverence. He and his siblings wanted to honor their father with an heirloom piece. The main theme knitted throughout was the town they grew up in, Kibler Valley. The stories he told me made it seem like a special place full of adventure, and I wanted that to come through. I thought of the movie Stand by Me, and I went with that kind of vibe, but, you know, without the dead body.

You mentioned your Dad has always been a Field & Stream fan. Do you have any memories of F&S?

Yes, he had them everywhere. My old man was a true outdoorsman and a total gear head. One of his great loves was archery, and he was pretty good. I actually have all of his old trophies hanging up in the wood shop. I would shoot with him, and when I started doing competitions, he would hand me some magazines with dog-eared articles. I remember feeling like that was special.

How did Jimi Hendrix land on a net?

I drew a lot of superheroes when I was young. But in high school, comics fell off to music once I discovered Bob Dylan, the Grateful Dead, Joplin, and, of course, Hendrix. I was a misfit. I sat at the misfit table in the cafeteria—with the other artists. Music got me through those years, and I think this music speaks to the fly fishing community.

I like to always be working on a passion piece. Looking at some of my old drawings, I came across a sketch of Hendrix. I wanted to transform his music to an art piece. Music brings people together. My current passion piece is inspired by Jerry Garcia. I think I’m going to do a field of mushrooms turning into roses with a few skeletons dancing around Jerry.

Where are some of your nets now?

I sent a net to Denmark recently, which blew my mind. One is in Australia, too! I haven’t reached out over the ocean too much, so when someone comes calling from that far away, I get pretty excited.

How does making nets compare with pharmaceuticals?

I still work over 60 hours a week, but the pay off is that I genuinely like what I do. I like the time in the wood shop, the people I speak with, the art I make, and the entire fishing community as a whole. It was a scary thing to cut the cord. I’m grateful every day that anglers like what I’ve made and that they see value in supporting a small business. They’ll always have my heart, and they’ll always get my best work.

What are you working on now?

I’m actually making a net for myself. It’s a mashup of comics and other stuff. If I’m lucky, I might catch something with it.