Top Fishing Lakes in Saskatchewan You Can Drive To

Saskatchewan is known for its pristine northern lakes brimming with monster lake trout and northern pike. 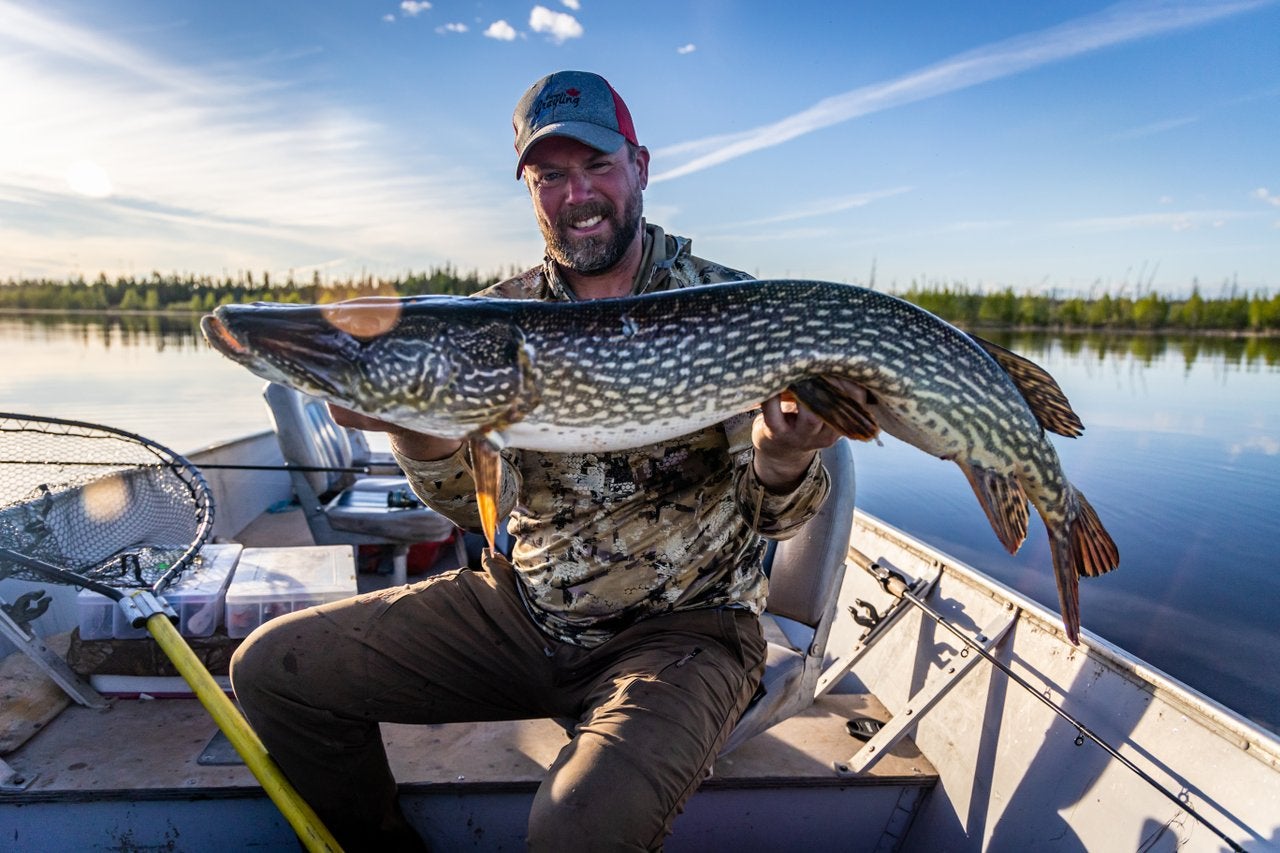 Saskatchewan is known for its pristine northern lakes brimming with monster lake trout and northern pike — if you’re itching for a road trip this summer, the best fishing in Saskatchewan is within driving distance. While some lakes require a longer drive than others, you can still get the fly-in experience you’ve been dreaming of, no float plane required.

While those who take the time to get to the far north may be rewarded with more fish and bigger fish, too, that doesn’t mean the fishing in southern Saskatchewan pales in comparison. You don’t have to look further than, Last Mountain Lake, which sits just an hour from the southern city of Regina. Here you can DIY a day or two in a rented boat and spend the night in a simple cabin at G&S Marina Outfitters (gsmarina.com) starting at just $100 USD per person per day (based on 3 nights, triple occupancy). G&S’s guides are also available if you want the inside track on where the walleye, carp and northern pike are biting.

From there, it’s not even 3 hours to Lake Diefenbaker, where you’ll find some of the most diverse fishing in the province, including rainbow trout that bite in May, June, September, and October. “It’s a lake that has everything in it,” says Adam Konrad, head guide at Fishing Geeks (fishinggeeks.net).

The lake boasts 500 miles of shoreline and traverses 3 provincial parks, making it a destination for far more than “just” fishing. But make no mistake, the fishing is world class. “It’s unlike any lake in Saskatchewan where it has almost all species of trout in it,” says Konrad. “We’ll start our days chasing walleye and pike, and then we’ll switch to trout.”

Fishing Geeks offers guided fishing packages ranging in length from just 5.5 hours to multiple day trips, and those who book in advance are lucky to reserve the outfit’s just-built lodge, which sleeps 5 comfortably. Meanwhile, Lake Diefenbaker Fishing Charters (fishinglakediefenbaker.com) is another solid option, offering day-long charters for up to 3 people departing from Hitchcock Marina, as well as 2-day “fish and stay” packages.

From Lake Diefenbaker, it’s an easy 5 hour drive to Tobin Lake, which is known for its northern pike and walleye, but is also home to yellow perch, goldeye, and sturgeon. The lake holds the National Fresh Water Fishing Hall of Fame record for the largest walleye caught through the ice (a 36.5” 18.3-pounder) and hosts a handful of fishing tournaments every summer, so if you time things right, you could catch the Tobin Lake Walleye Classic, the Saskatchewan Premier’s Walleye Cup, or the Nipawin Pike Festival (the lake also hosts womens, family, and kids-only fishing tournaments, too)

Tobin Lake Resort (tobinlakeresort.com) offers a boat launch, the largest fleet of rental boats in all of Saskatchewan, and guided trips by the day. Meanwhile, nearby Tobin Lake Trophy Adventures (tobinlaketrophyadventures.com) offers a more of a full package experience, with 3 or 5-day fishing trips as well as a 10-day “fall triple combo” (Aug. 25-Sept. 3, 2022) for those looking to fish and hunt for whitetail deer and black bear, as well.

From Tobin Lake, head north for 4 hours and hit Besnard Lake or Lac La Ronge (or both). Both lakes offer exceptional walleye and northern pike fishing (plus whitefish, perch, and burbot) in equally tranquil settings. In terms of accommodations, Besnard Lake Lodge (besnardlake.com) features simple and self-catered lakeside cabins (so bring groceries and be prepared to cook for yourself), while nearby Collins Camps & Outfitting (besnardlake.ca) features both campsites and cabins, plus a sandy beach for swimming. Over at Lac La Ronge, the aptly named Pickerel Bay Cabins (pickerelbaycabins.com) (pickerel being the pseudonym for walleye) offers rustic log cabins and both catered and self-catered plans, and great walleye — er, pickerel — fishing, both with and without a professional guide.

Located just 50 miles south of the Northwest Territories, Black Lake is about as far north as you can drive in Saskatchewan, and most anglers fly-in rather than make their way by car. However, if you want to avoid float planes at all costs, you can drive north until the you run out of road — and reap the fly-in style rewards.

“It’s the end of the road, so it’s pretty good fishing,” says Trevor Montgomery of Camp Grayling (fishcampgrayling.com) and sister resort Tazin Lake Lodge, which is a fly-in resort that’s even more remote. While the walleye aren’t as big this far north as they are in the warmer waters in southern Saskatchewan, Black Lake is home to a healthy and feisty population of arctic grayling — the so-called sailfish of the north — as well as lake trout and northern pike.

And if, after all that driving, you decide to conquer your fear of flying once and for all, Camp Grayling offers fly-out day trips to a handful of lakes, including picturesque Lefty Falls, which boasts the biggest waterfall in all of Saskatchewan.

Saskatchewan’s lakes have much to offer anglers, whether they’re making their way by car or plane, and whether they’re looking to land lake trout, northern pike, walleye, arctic grayling, rainbow trout, or… the list goes on and on. The trip might take a little longer by car, but driving allows you to remain flexible and go where the wind — and fish — takes you.

Honorable mentions of lakes that you can’t drive to, but are nonetheless worth the trip: